There’s not much sentimental in Laura Brignac’s home. She tells me this offhand, a few minutes after meeting her.

“Because I left everything after the divorce,” she explains. We’re in her Windermere living room, and she’s perched cross-legged on a periwinkle armchair.

But as I look around her space, every inch washed in color and carefully chosen art, I find it hard to believe. And by the end of our interview, I’m certain she’s wrong. There’s symbolism in every hue, meaning in every painting.

The design all started with a butterfly mixed-media piece. Artist Charles Patrick crafted tiny butterflies out of paper cut from comics and Alice in Wonderland children’s books. The piece, which hangs now in Brignac’s foyer, is called “Do Impossible Things.”

As soon as she saw it, she had to have it.

Cannon is known locally for her color-saturated designs, and she drew an array of pastels from the butterfly piece to apply to the furniture and finishes in Brignac’s home.

On left: The butterfly artwork over the shagreen chest is by artist Charles Patrick. The dog painting is a portrait of Brignac’s pet, Charlie, by Libby Willingham.

On right: Much of the art and decorative objects in Brignac’s space were sourced from vendors at The Foyer, including the teal mushroom-shaped vases.

Cannon and Brignac have been friends for more than a decade. They met through Brignac’s business, The Foyer. Brignac opened it in Baton Rouge 12 years ago, hoping to offer local artists and designers a space to showcase and sell their work. Today, she houses more than 75 vendors and has helped outfit many homes in the Capital Region.

But as much as The Foyer bursts with color, Brignac says the old house she shared with her ex-husband was full of dark, muddy earth tones.

It’s a stark contrast to the woman sitting here today, dressed in a yellow wrap dress. It’s as sunny as her blond hair, as bright as her chartreuse dining room.

Cannon and Brignac pow-wowed for months over the design. From day one, they read each other’s minds, finished each other’s sentences. They schemed a design that was playful and quirky. Beautiful, but not untouchable. A place you’d feel OK to prop your feet up on a chair.

A place Brignac could play with Charlie,   her lively American bulldog-boxer rescue. A space just as suited to hosting grown-up sleepovers with her girlfriends—complete with pajamas and Scrabble—as it is to early-morning meditating on the couch.

“It’s a lot about trust,” Brignac says, explaining why it just worked with Cannon. “There were times I was like, ‘Really? That?’ And she’d say, ‘Just trust me.’” 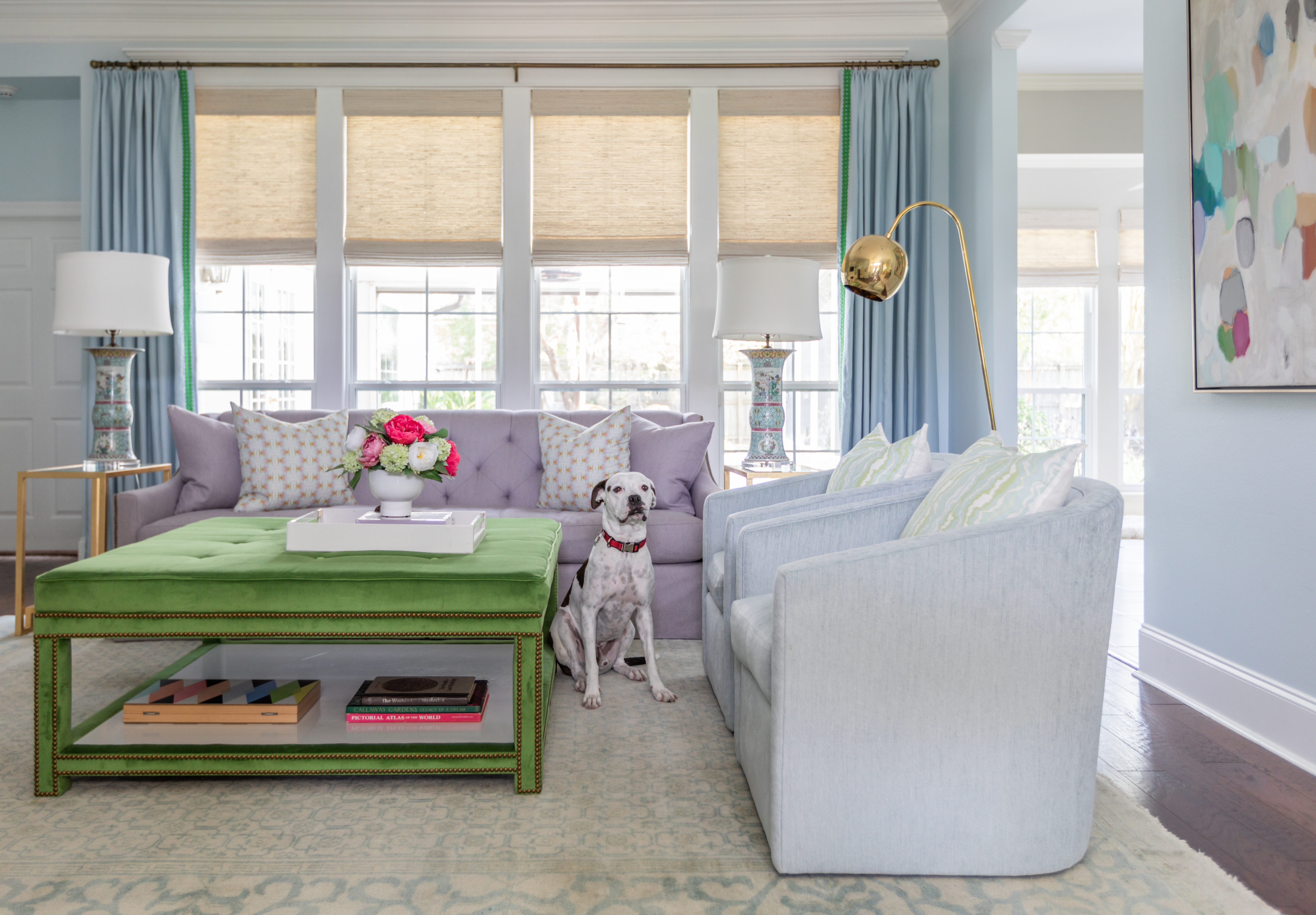 On left: As a nod to Brignac’s love of stones and gems, Cannon swapped the cabinet’s hardware for amethyst knobs.

On right: A pair of patterned lamps on the side tables were originally vases Cannon had converted into lamps by Abat-Jour. The painting is by  Jennifer Poe.

One of those times: when Cannon convinced her to cover her bedroom’s back wall in lavender drapes. Beyond making a super unique, bold statement, Cannon explains that the curtains soften sound. They turned Brignac’s bed into a total cocoon.

“I would tell people, ‘I’m getting a lavender sofa and blue armchairs, and they would be like, ‘Wait—why?’” Brignac recalls with a laugh. “But I wanted it to just be me.”

Cannon and Brignac dug through shops from Louisiana to Texas to source furniture and decor. If they couldn’t find an item they wanted, they used their design connections to have it custom made. They accented the walls with pieces from artists Brignac has worked with through the years, like Jennifer Poe and Camille Thibodeaux.

“It’s like having all the people you love surrounding you in your space. I love it,” Brignac says, punctuating her sentence with a happy little hop.

By the end of our chat, Brignac returns to the “Do Impossible Things” piece.

“I love what a butterfly represents,” she tells me.

First, it’s a grubby caterpillar, then retreats into its chrysalis. Its transformation into a butterfly hurts. But when it finally emerges, it’s molded itself into something completely different.

But it seems Brignac isn’t just talking about a butterfly. She’s talking about herself. In many ways, this home represents her own metamorphosis.

She looks around at the house she created, her first on her own, made just for her.

“I’m free to be me,” she says. And as soon as the words come out of her mouth, I can tell she’s getting sentimental.

Teal vases From The Foyer 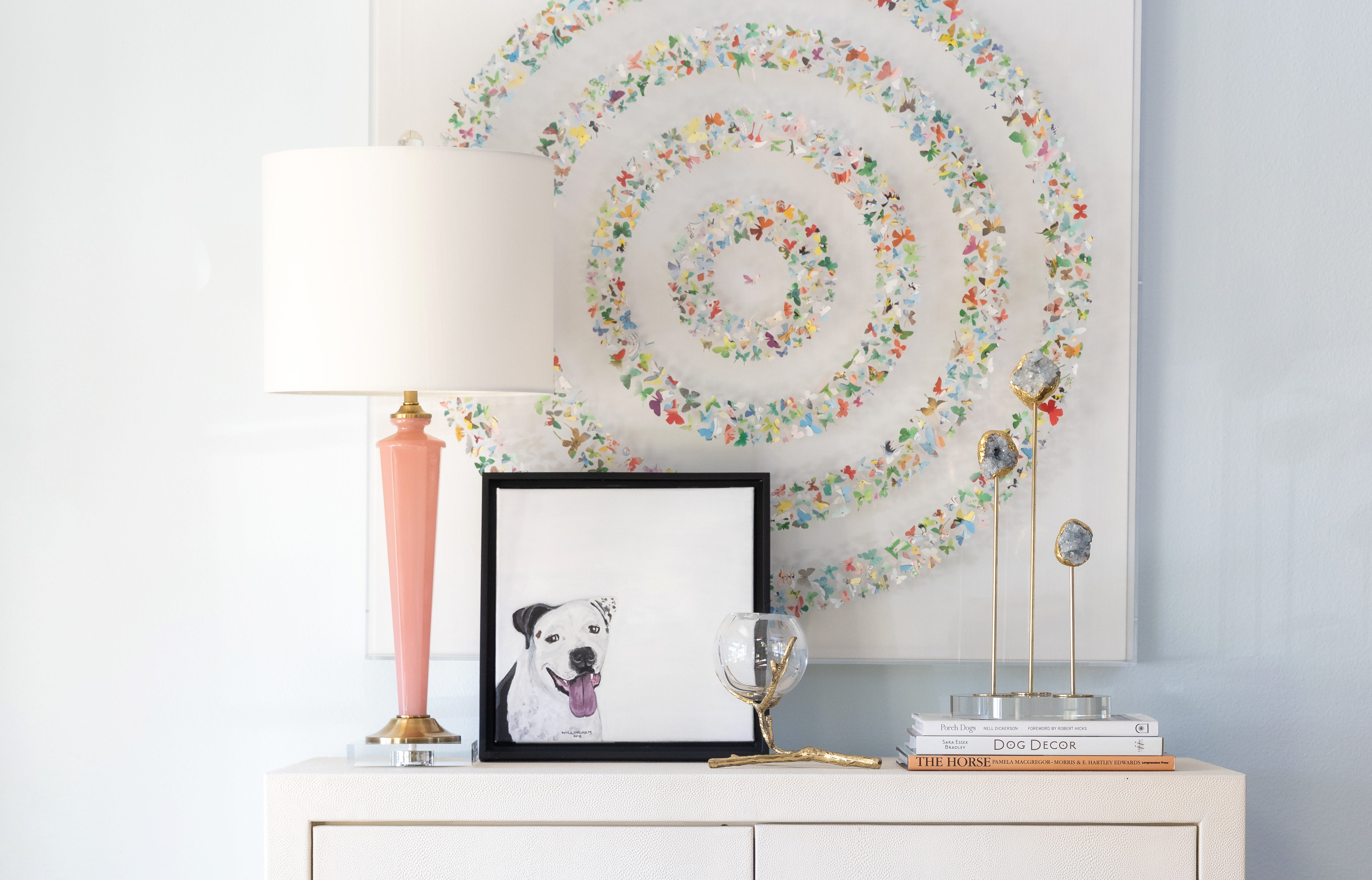 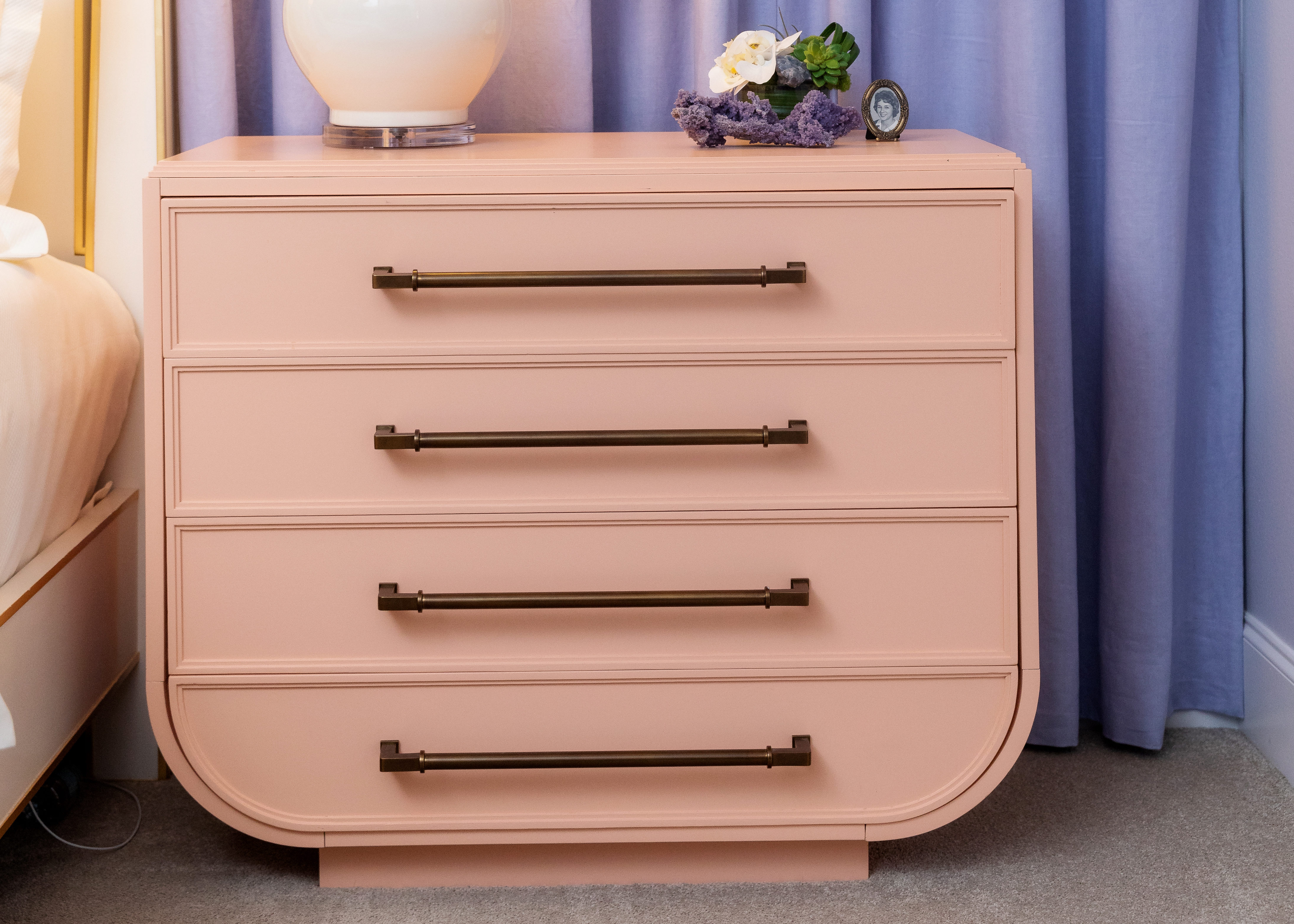 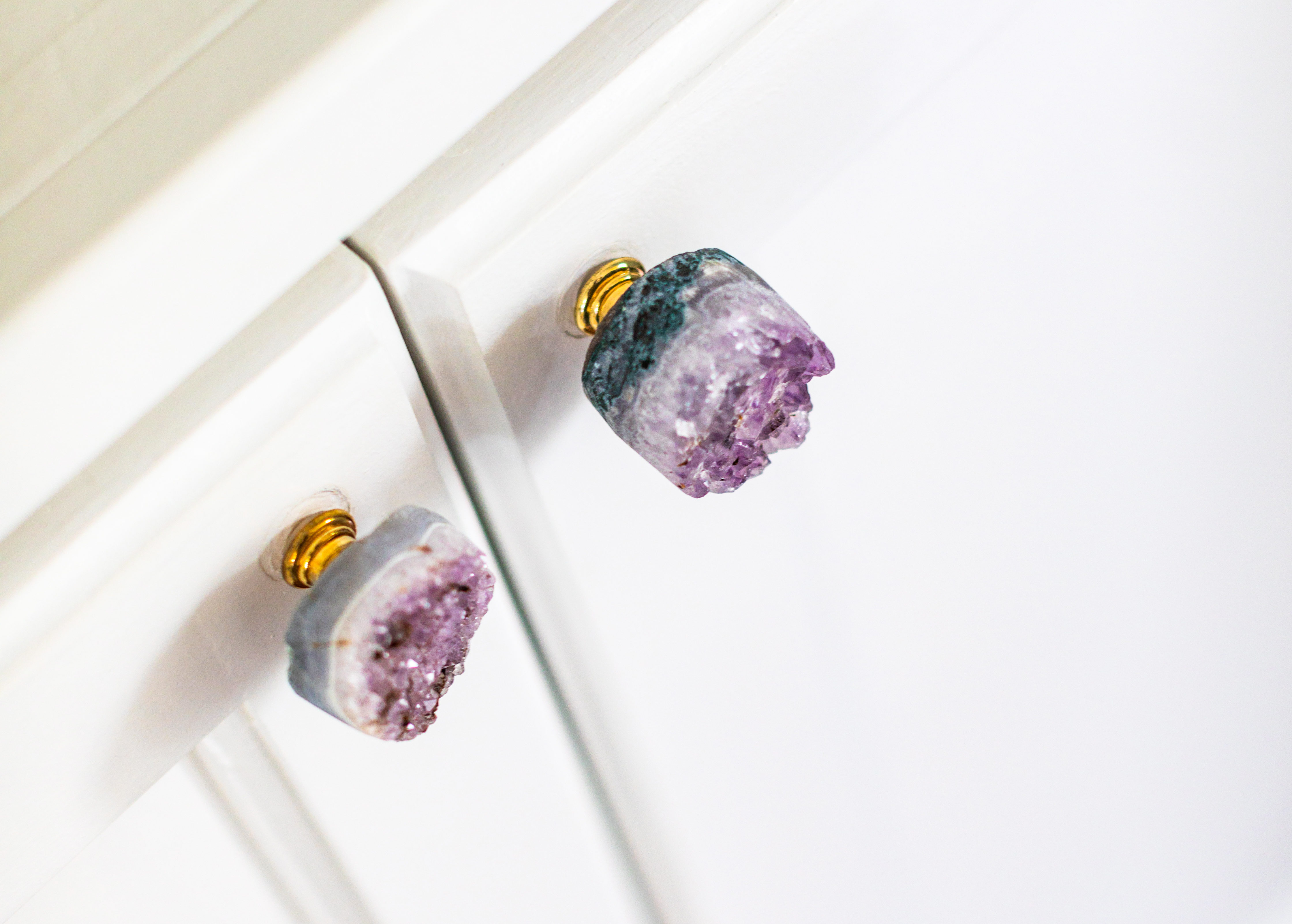 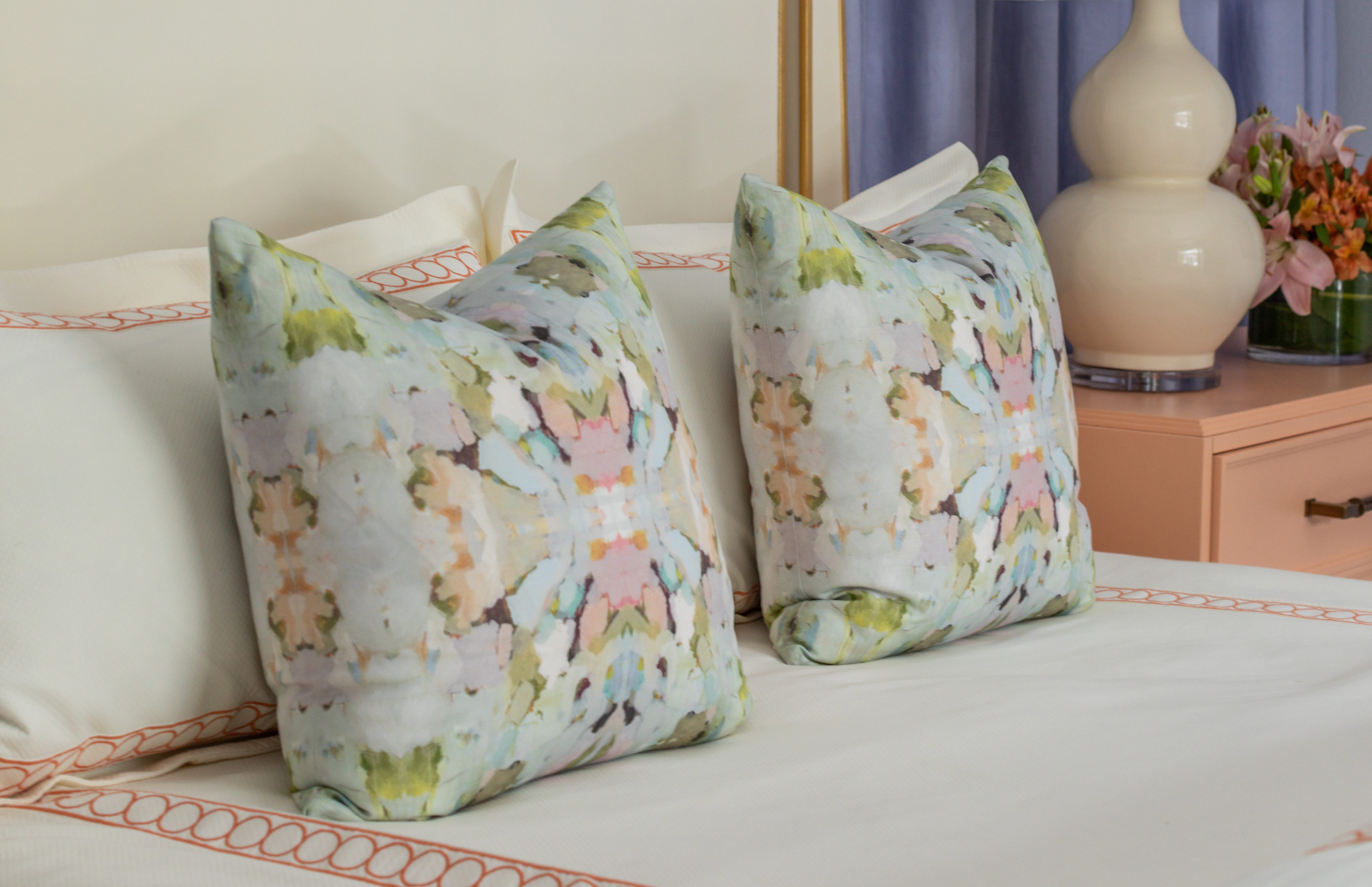 Decorative throw pillows From The Foyer

This article was originally published as part of the April 2020 cover story of 225 Magazine.