Barton Gilley grew up obsessed with the works of Jim Henson and Frank Oz. As a kid, he’d spend hours studying the movements and details of groundbreaking puppets like Yoda, the Muppets and characters from the 1982 dark fantasy The Dark Crystal.

A couple of years ago, Gilley landed a once-in-a-lifetime opportunity to visit Jim Henson’s Creature Shop in Los Angeles—ground zero for cinematic puppetry design and execution.

That chance visit led Gilley to land work on several Hollywood projects, including a revamp of that 1982 favorite, The Dark Crystal: Age of Resistance, released on Netflix last year.

“It’s been amazing, working with people who worked on all those movies that I grew up with and loved,” says Gilley, 34. 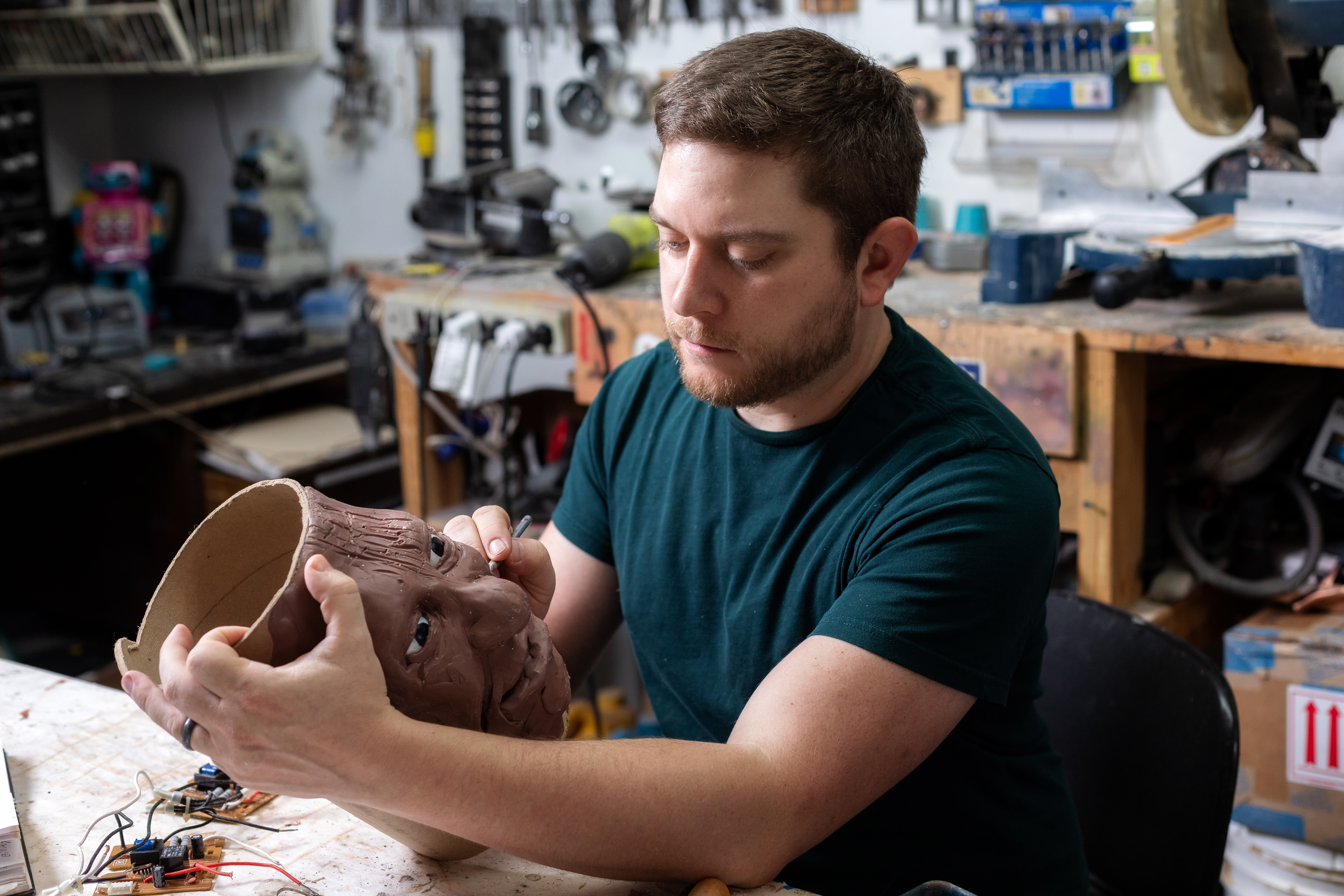 The journey started in 2016, when Gilley and fellow Baton Rouge puppet maker Clay Achee teamed up to enter a Creature Shop film contest inspired by The Dark Crystal. Gilley and Achee came up with an original story about a character named Twiggly, and Gilley fabricated a Twiggly puppet from scratch. The pair worked on their short film for five months and were disappointed when it didn’t win. But the quality of their work didn’t go unnoticed. The duo earned an honorable mention and a Creature Shop private tour. While there, Gilley says he was determined to get noticed.

“I was the last to leave every room, and I talked to anyone who would listen,” he says. “At one point, I was showing one of the staff pictures of the stuff I’d built from scratch on my phone.”

Gilley’s creations, which included a dead-ringer R2-D2 beer dispenser, props for The 13th Gate’s scary attractions and other animatronic sculptures, revealed his talent. He exchanged contact information with a Creature Shop staffer and was asked to send more pictures of work samples. About eight months later, Gilley got a call asking if he could fly to L.A. and work on the Dark Crystal reboot.

In July 2017, Gilley joined a team of sculptors and special effects artists making creatures for the Netflix prequel series, including the waifish Gelflings and their vulture-like oppressors, the Skeksis. Gilley was responsible for engineering tiny motors and other mechanisms that made the characters look like they were talking and moving.

“You don’t really think about the different ways your eyelids move when you look at something, or all the muscles in your forehead,” Gilley says. “There’s a lot of detail.”

Gilley helped engineer the motors and other mechanisms that brought the Gelfling and Skeksis puppets to life. Still taken from the Netflix series.

Around the walls of the Creature Shop hung famous Henson characters, like those from the early ’90s TV sitcom, Dinosaurs. While most modern films and TV shows rely solely on digital effects to create otherworldly creatures, Henson was dedicated to the art of puppetry. The 1982 Dark Crystal was hailed for its groundbreaking animatronics and puppetry rendered in a darker and less family-friendly way than the Muppets.

Gilley, who is self-taught, says he studied the Creature Shop’s retired puppets for hours, intent on learning how their internal controls functioned.

He also connected with other artists working on the project, including veteran special effects designer Greg Aronowitz. After their work on The Dark Crystal ended, Aronowitz asked Gilley to help him on several other projects, including transforming the L.A. residence of Minecraft creator Markus “Notch” Persson into a creepy, vintage Halloween wonderland. With Aronowitz, Gilley has also built a 20-foot stargate for a Stargate movie spinoff and made an animatronic mask for the movie Patsy Lee & the Keeper of the 5 Kingdoms, currently in post-production. Projects like these keep Gilley going back and forth to L.A. for months at a time.

At the moment, he’s working on creating a face for a “talking tree” at the Grapevine Botanical Gardens in Grapevine, Texas, and just finished making a talking Mind Flayer host for a Dungeons and Dragons active player podcast.

“I think people appreciate the detail and see that CGI can’t do everything,” Gilley says. “There will always be a market for the real deal.”

This article was originally posted in the February 2020 issue of 225 Magazine.

In need of a creative activity break? Check out how Baton Rouge arts organizations are reaching out virtually

Write on: Our home