When Matt Bahnick was playing baseball at Kennesaw State University in Georgia in the mid 2010s, he would always write the same two letters on his wrist tape before games: “P.V.”

The message stood for “positive vibes,” and after he started wearing it, his team went on to win 28 of its next 30 games. Soon, everyone on the team—including team parents—was writing “P.V.” on everything.

It’s a mantra Bahnick has held onto ever since, and it’s continued to bring him great things. In 2015, the Pennsylvania native started his brand, The Positive Vibe Movement, selling T-shirts, hats and apparel with uplifting messaging. Today, the line is regularly worn and championed by professional athletes, and 5% of its proceeds are donated to The You Aren’t Alone Project, a Baton Rouge nonprofit dedicated to mental health and wellness. 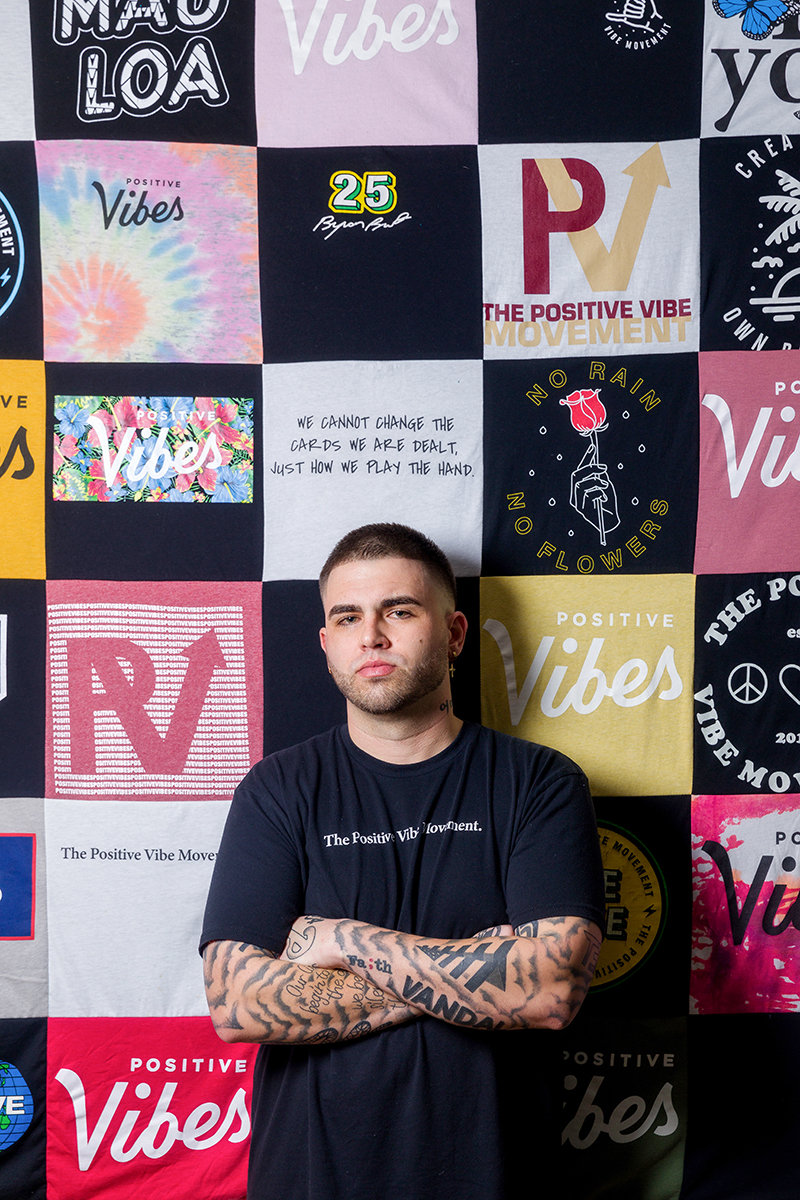 From the beginning, Bahnick has had one goal: to end the stigma around mental health, something both he and his younger brother, A.J., have struggled with. 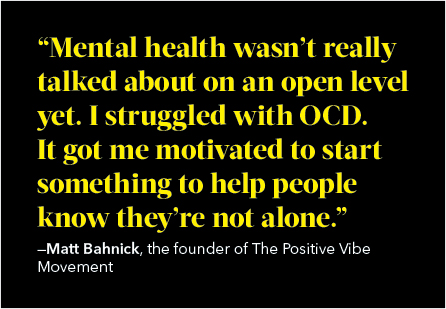 Bahnick was diagnosed with obsessive-compulsive disorder when he was 8. A.J. has long struggled from bipolar disorder, and when he was a high school senior, he tried to take his own life. Watching A.J. go through that pushed Bahnick to start focusing his career more on mental health.

“Mental health wasn’t really talked about on an open level yet,” Bahnick says today. “I struggled with OCD really bad, and baseball was my escape. I needed a [new] escape once baseball was over. I had an amazing support system, but not everyone has that. It got me motivated to start something to help people know they’re not alone.”

Bahnick played with a few ideas for a brand before the concept finally clicked for him.

“‘P.V.’ was a real thing. It was a movement. I thought I should do something with that,” he says. 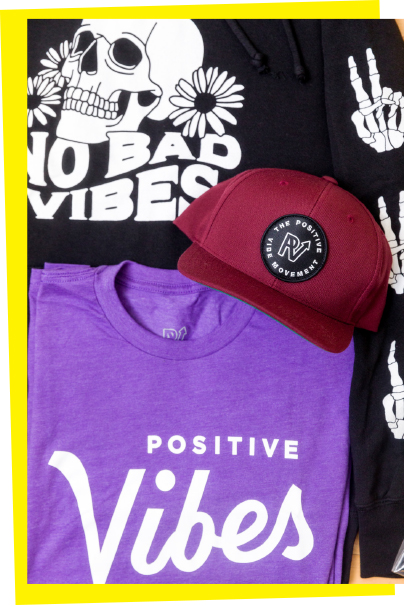 The brand produces shirts, hoodies and hats inscribed with “Positive Vibes” and “The Positive Vibe Movement,” along with other designs, like a shirt decorated with blue butterflies and the expression “be you.”

In the beginning, when he was still Ubering to pay for bills and make ends meet, his connections and sources in baseball helped get his line off the ground. He reached out to former teammates, including several who had been professionally drafted, about wearing his brand. He’d show up at spring training at 5 a.m. with 300 hats. He’d park in a rental car in the Chicago Cubs players’ parking lot and sell hats and shirts.

Cubs star shortstop Javier Baez was a friend of a friend, and Bahnick gave him some items. Los Angeles Angels center fielder and eight-time MLB All-Star Mike Trout wore the hat courtside for Kobe Bryant’s last game in Phoenix. Soon, Bahnick landed the brand in its first store in a mall in Tampa, where he was living at the time.

But it was one evening of Sunday Night Baseball that really changed everything. It was 2018, and he was back in his Pennsylvania hometown, staying in his mom’s basement. Bryce Harper had signed one of the biggest deals in baseball history, moving from the Washington Nationals to the Philadelphia Phillies. And it just so happened that Bahnick had sent Harper a Positive Vibes hat the year before.

“My friend texted me and said ‘Bryce is wearing the hat. Put your TV on.’ I put the TV on, and Bryce is rocking the hat during the interview,” Bahnick says. “Three times during that game, they aired a segment of that interview. Every time it would air, we’d get 15 or 20 orders. It was the first time anything happened like that. … My phone was going nuts.”

“People like Bryce Harper sign the biggest brand deals in the world,” he says. “But in the span of two weeks, he probably wore our hat five times [on his own]. He wore it during his return to D.C., during the biggest press conference of his life. And that’s when everything changed. That’s when it became real.”

“All of this creates a huge moment. But we were thinking ‘What are we going to do with this moment?’” Bahnick says. “We really needed to build a brand.” 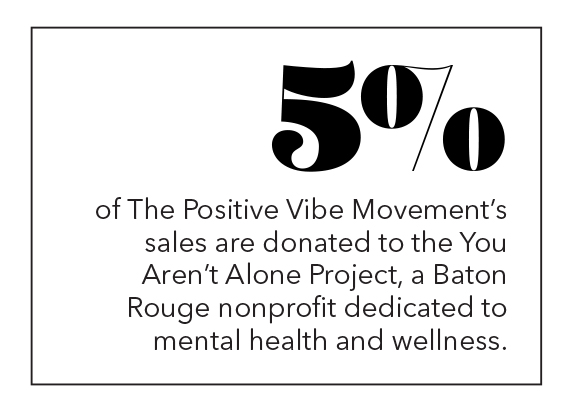 In August 2019, Bahnick ended up back in therapy for his OCD. After going through treatment and one-on-one counseling, he decided it was time to get out of Pennsylvania. He chased a business opportunity to Baton Rouge, and while it didn’t pan out, he and A.J., who now works with him on the brand, decided to make the move to the Capital City permanent. Bahnick even started working with Baton Rouge printing company Giraphic Prints to screenprint his brand’s clothing.

“I’m not in a hurry to leave Baton Rouge because of how amazing the people are here. … They’re so kind, and they’re so supportive. A.J. and I are happy here. Whether it’s the tattoo artists, barber, the worker at the Starbucks I go to everyday—we love giving out T-shirts and hats.”

The Positive Vibe Movement now has more than 21,000 followers on Instagram, where it mixes clothing photos with inspiring quotes and anecdotes. The brand is worn regularly and supported by numerous famous athletes, and it has been featured on the likes of ESPN and NBC Sports.

“My brother and I, who have struggled our whole lives,” Bahnick says, “now get to do what we want to do all day. And I just want to help people and help them feel good.” thepositivevibemovement.com