August is one of our hottest and wettest months in south Louisiana. It’s not the ideal time of year to hang around outside. So we decided to take things back into the kitchen for some fun, hands-on, indoor entertaining.

Tracey was in New York in June and was inspired by one of the meals she had at an Italian restaurant on the Upper East Side, Mezzaluna. It’s a little neighborhood haunt that specializes in homemade pastas, and the meal was delicious and memorable.

We decided we had to recreate this delightful meal using fresh local ingredients and homemade pasta, because there is nothing more decadent and satisfying than a bowl of freshly made pasta or homemade ravioli.

The fresh pasta recipe takes just a few minutes to assemble, and the result is well worth the effort. If you can recruit a couple of friends to help roll out the pasta and fill the raviolis, the whole process takes less than an hour.

The recipes Tracey has come up with are simple and delicious. More importantly, making your own pasta is a great way to spend quality time with friends in the kitchen, especially with a glass of wine (or two). 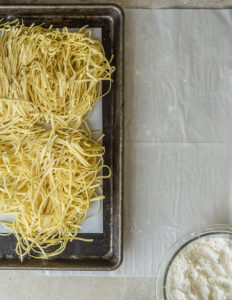 Use this simple recipe as the starter for our two fresh pasta dishes.

1. Sift the flour and salt together and place into the bowl of your mixer. Place the dough attachment onto your mixer.
2. Use your fingers to make a little well in the middle of the flour, and pour the eggs into the middle.
3. Turn the mixer on low and add the olive oil. As the dough begins to mix and come together, add the water, one tablespoon at a time, until the dough forms a ball and begins to pull away from the sides of the bowl.
4. Bring the speed up to medium, and continue mixing for 3 to 4 minutes or until the dough ball is smooth and everything is well incorporated.
5. Remove the dough from the mixer and wrap it in plastic wrap. Allow the dough to rest before working with it. 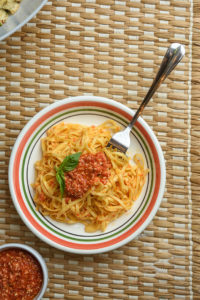 Usually when we think of pesto, we think of basil with garlic and pine nuts, but we decided to change it up a bit and make a pesto using roasted red peppers. This is a great alternative to basil pesto and is a bit heartier. The smoky hint of the roasted red peppers along with the salty bite of the cheese make this easy pesto our new favorite go-to sauce, and it’s delicious as a topping for the fresh pasta.

1. In a food processor, combine the garlic, almonds, salt and red pepper flakes, and begin pureeing. With the machine running, pour in half the oil until a paste forms.
2. Turn off the processor, scrape down the sides and add the roasted red peppers. Turn the food processor back on and continue pureeing until everything is smooth.
3. Turn off the machine again, and pour in the remaining oil and Parmesan cheese. Pulse the machine a couple of times to make sure everything is well blended. Pour the red pepper pesto in an airtight container. It will keep in the refrigerator for up to one week.

To cut fresh pasta into ribbons:

1. Divide the pasta dough into 4 pieces and set your pasta machine on the thickest setting. Dust one piece of the dough with a little flour and begin rolling it through the machine out into a sheet. Continue rolling out the dough, reducing the thickness level on the machine as you go, rolling the dough out into a thin long sheet.
2. Once you have reached your desired thickness, run the sheet through the attachment side to cut the pasta into ribbons. Sprinkle the pasta with a little flour to prevent it from sticking together and place it on a baking sheet in a thin layer until you are ready to cook.
3. To cook the fresh pasta ribbons, bring a large pot of water to a rolling boil and add a teaspoon of salt.
4. Drop in the fresh pasta and stir it well to make sure it is not sticking. Boil the fresh pasta 3 to 5 minutes or until it is just tender. Drain well. Immediately toss the warm pasta in your favorite sauce or pesto and serve. 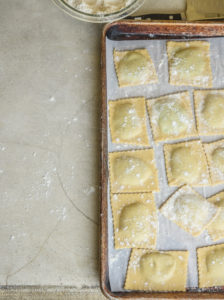 The method for making these raviolis is pretty simple: roll out a rectangular sheet of pasta and arrange a row of little scoops of the spinach filling down the middle. Placing another sheet on top and cutting out the ravioli squares leads to a stuffed pasta just like the pros do it. The spinach filling is creamy and salty, adding delectable heft to this dish.

To make the filling:
1. In a food processor, coarsely chop the baby spinach.
2. In a large skillet, heat the olive oil on medium, and sauté the shallots and garlic for 1 minute.
3. Add the chopped spinach, salt, pepper and dried herbs. Cook until all the liquid has evaporated.
4. Turn off the heat, and fold in the ricotta and Parmesan cheeses until the mixture is well-combined and creamy.
5. Fold in the beaten egg and allow the mixture to cool completely before filling the raviolis.

To fill raviolis:
1. Cut the pasta dough into eighths. Follow the directions on a pasta machine to roll out the fresh pasta dough into 15- to 16-inch long sheets that are about 5 inches wide. (This should make 6 raviolis per sheet.) Lay the sheets on a flat surface dusted with flour. Place a damp towel over the pasta sheets to keep them from drying out.
2. Leaving a 1½-inch outer border and working so that there is an inch between each mound of filling, place 6 even teaspoons of the spinach filling in a row down the middle of the dough. Brush a little warm water around each mound and lay a second sheet of the rolled-out pasta on top.
3. Gently press around each ravioli to get rid of any excess air, then use a sharp knife or a pastry cutter to cut out 2-by-2-inch raviolis.
4. Sprinkle a little flour on a baking sheet and place the raviolis in a single layer until you are ready to cook. Continue the steps until you have used all the pasta sheets and filling. You should end up with 36-40 ravioli.
5. To cook the ravioli, bring a large pot of water to a rolling boil. Add a teaspoon of salt to the boiling water and drop in the raviolis.
6. Stir to prevent sticking and cook for 3-5 minutes or until the raviolis begin to float to the top. Drain well and toss with your favorite warmed red sauce. 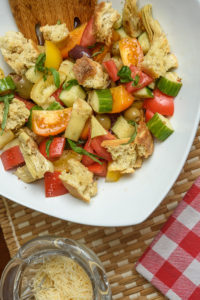 This is an Italian salad made of fresh tomatoes and day-old bread tossed with other vegetables and a light vinaigrette. It’s one of our favorite salads to make in the summer because it highlights all the wonderful tomatoes that are available. The colorful and inviting dish looks beautiful on your table and is delicious to eat.

For the bread:
1. Heat the oven to 350 degrees. Place the bread pieces into a large mixing bowl.
2. Drizzle ¼ cup of the olive oil over the bread. Sprinkle in half the salt, pepper, minced garlic and dried herbs, and toss well to coat.
3. Place the seasoned bread in a single layer on a baking sheet. Toast 10-12 minutes or until the bread is golden and toasty. Remove from the oven and allow to cool until you are ready to toss the salad.

For the dressing:
1. In a small mixing bowl, whisk together the remaining garlic, salt, pepper and dried herbs with the Dijon mustard.
2. Add the balsamic vinegar and whisk until smooth.
3. Continue to whisk while you drizzle in the remaining ¾ cup of olive oil until the dressing is incorporated. Set aside while you assemble the salad.

To assemble the salad:
1. Cut the tomatoes and cucumbers into chunks, and place them in a large salad bowl.
2. Drain the olives and marinated artichokes, and add them to the cucumber and tomatoes.
3. Pour the dressing over the salad. Allow it to chill and marinate for 30 minutes before serving.
4. When you are ready to serve the salad, add the toasted bread and toss everything well.
5. Top the salad with the coarsely chopped fresh basil and Parmesan cheese.

Homemade or locally made?

These recipes require the use of a pasta machine, which helps achieve smooth, flattened sheets of pasta dough and also includes attachments that can precisely cut ribbons of pasta and other shapes. Kitchen stores such as Sur la Table (surlatable.com) carry pasta machines with a manual crank in the $80 to $100 range.

If you aren’t up for the challenge or don’t have the equipment, locally made pasta is the next best thing. D’Agostino Pasta Company (dagostinopasta.com) makes a variety of pasta styles available at its retail storefront in the Drusilla Shopping Center and at more than a dozen local groceries and shops. Because it is made fresh in smaller batches and air dried, the pasta doesn’t take as long as mass-produced varieties to cook to al dente.