Driving down Chippewa Street toward Memphis Mac had my mind and heart filled with fond memories of a much smaller Baton Rouge. Memories of when there wasn’t a north or south Baton Rouge and everything below LSU was country. It felt like coming home.

Housed in a small, red wood-clad building with a collection of outdoor tables, this place screamed “real deal” barbecue. Inside, I was greeted incredibly warmly by Carlos Thomas, Mr. Memphis Mac himself. Hailing from Memphis (go figure) he shyly explained that after graduating from LSU, it was the women and the food that kept him here.

Among the several barbecue plates on the menu, there’s only one thing to order in my estimation: the Greedy Gutt. It consists of all the meats and sides you could want. We were unsure how many of our party it would feed, but Mr. Carlos jovially explained, “It depends on just how greedy your friends are.” Very. And the bonus was the ability to try everything.

Served quickly and efficiently from a small steam table, it’s no wonder this place is so popular with the across-the-street Exxon lunch crew.

I’m no rib aficionado and prefer off-the-bone meat, but the generously meaty and tender pork ribs had a noticeable smoke ring beneath the savory dry rubbed bark. The bones released the mild, juicy meat quite nicely. A dab of thick, slightly sweet, peppery barbecue sauce brought out the inherent caramelization of the pig. 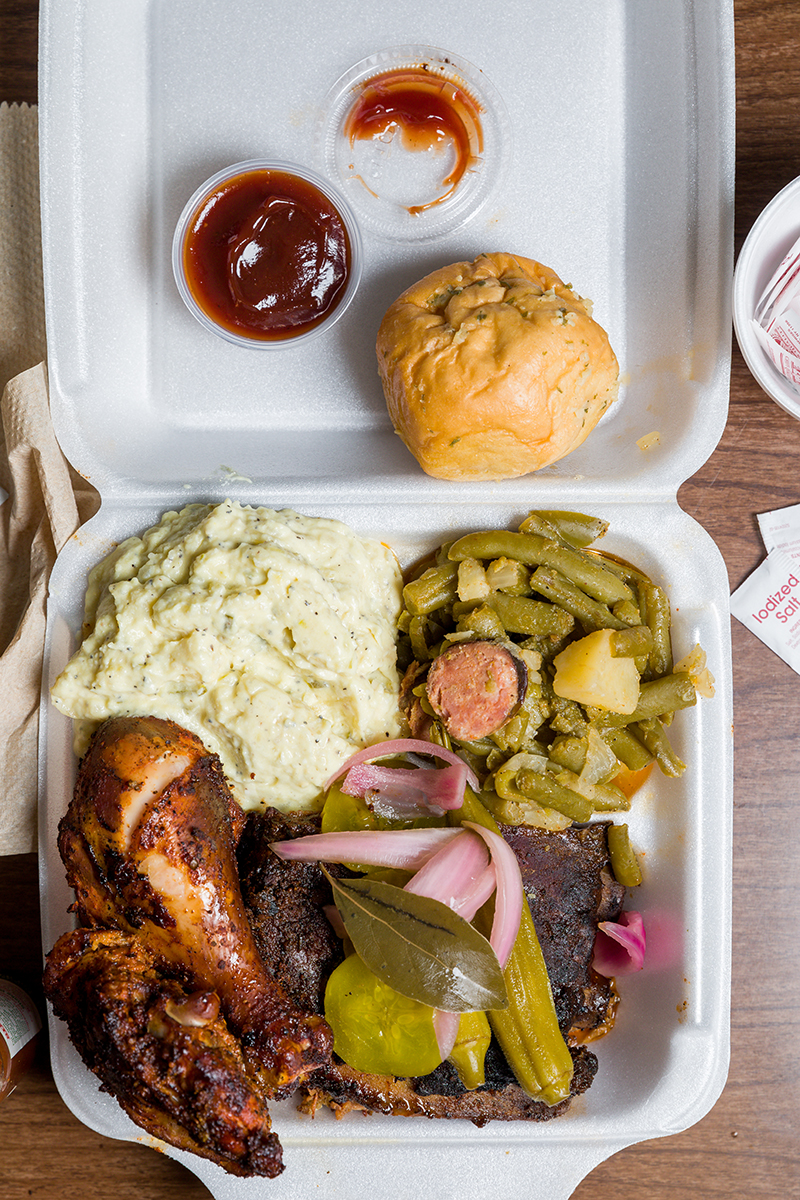 A plump link of smoked sausage had a wonderful snap and slightly sugary and fatty interior. Married with the simplicity of the mild chicken leg quarter, these two brought out the best in each other.

But I was saving myself for the pulled pork and brisket. At first, the two chopped meats were indistinguishable from each other inside the requisite styrofoam containers. Upon closer inspection, the pork revealed itself. Pulled pork is generally my go-to barbecue with its mix of tasty shredded bits, fatty parts and the glorious bites of crusty exterior. This large portion was supremely juicy, with a mildly smoked and salty quality that enhanced the pork.

On to the brisket—my second favorite barbecue meat. I’m used to sliced brisket, but this lightly chopped version brought all the best parts together in a solitary bite. A squirt of the sauce on both the brisket and pork enhanced the salt and elevated the smoke. But just a drop will do ya. The quality flavors mean there’s no need to drown your food here.

Once the meat sweats kicked in, it was on to the sides.

The macaroni and cheese was old-school fare: creamy, simple, a not-too-thick sauce and just past al dente noodles. Green beans were slow cooked with bacon, punches of black pepper and a delightful surprise of potato chunks throughout. I was thrilled to see pork floss floating throughout the sweet and peppery baked beans. There’s nothing wrong with adding a touch more pork to your plate!

I’ve never been a fan of traditional Southern coleslaw or potato salad. But my apprehensive bite showed the slaw was crunchy with a touch of sugar, while the potato salad was laden with yellow mustard and pickle relish. It tasted made-today-fresh.

My partner confirmed the potato salad was pickley with a predominant mustard, as opposed to a mayonnaise base, with very small rather than chunky potato pieces. It was gobbled up.

Memphis Mac is a short drive from downtown, Southern University, LSU and Mid City. But good barbecue is worth the drive—from anywhere, at any time.

So get your pork butt over to Chippewa Street for some tasty “que” and feed your own greedy gut. Your stomach will thank you.

Memphis native Carlos Thomas opened Memphis Mac Louisiana BBQ in early 2020 in a space formerly occupied by Sky Hook Cafe off Chippewa Street. It quickly gained a following among the industrial workers nearby, but it’s also become a favorite of barbecue lovers in the know from around the city.

The straightforward menu features several platters of varying sizes depending on your appetite. Don’t miss the opportunity to pile on several meats at once, such as the tender pork ribs or 12-hour smoked brisket. Substantial sides like green beans stewed down with sausage and potatoes mean you won’t leave hungry.