Folks, the wait is over. The long anticipated Mid City Beer Garden quietly opened this Labor Day weekend on Aug. 30. Since the plans were first announced in 2015, the city has waited … and waited … and waited for the beer garden to open its doors. Once word spread that the Government Street hub’s taps were open, Baton Rougeans quickly poured into the hip airy space. The 225 staff wanted to see what all the buzz was about, so staff writer Cynthea Corfah got dinner and drinks barside at the new Mid City Beer Garden. Here’s how her experience went.

It was after 5 p.m. when I pulled up to a full parking lot outside the beer garden. It was opening week, so the place was popping. Walking into the beer garden was like stepping into a sunny, lush oasis full of joyous people, tons of craft beer and hearty comfort food. Inside, groups of friends sipped beer flights, young professionals typed on their tablets, and Mid City natives grabbed quick dinners to-go. 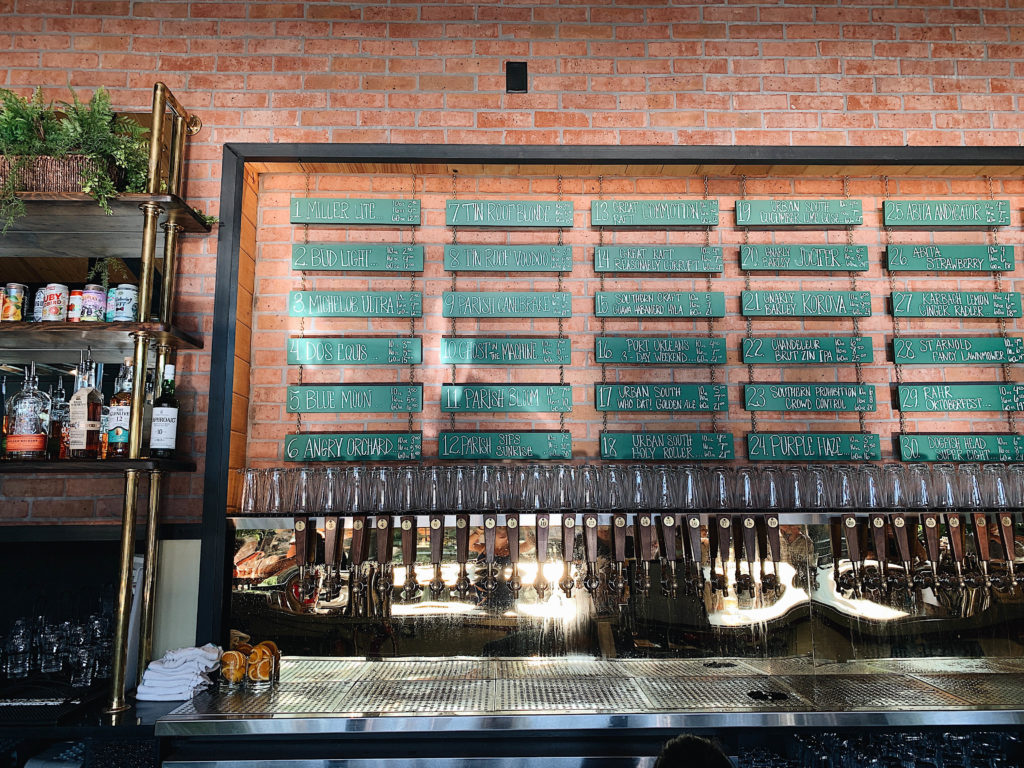 Like any foodie, I wondered if the food and drinks could possibly live up to the decor. Spoiler alert: They did. Mid City Beer Garden serves traditional bar food like po-boy sliders, chicken wings, grilled cheese sandwiches, cheese fries, pretzels and grilled bratwurst.

Of course, I had to order Chelsea’s Famous Grilled Cheese and Tomato Soup. Although I never got to try the original legendary Chelsea’s grilled cheese sandwich, I was excited to dig into this one. Six different cheeses were melted together and sandwiched between two buttery slices of homemade rosemary focaccia bread. The sandwich was good enough to stand out on its own, but the side of tomato soup made it even better. I dipped the grilled cheese into the flavorful and comforting soup and savored each bite.

As my friend and I sat barside, we shared a pretzel and ordered drinks. The pretzel was served with coarse ground mustard and a small cup of tomato basil soup for dipping. It was warm and tender, with just the right amount of salt.

For drinks, we ordered two beers on tap: Urban South’s Who Dat Golden Ale and JK’s Farmhouse Ciders’ Honeycrisp Haze. We also tried the Salt and Pepper cocktail—a gin beverage that was light, tart and perfect for the end of summer.

As the sun began to set, the hum of conversation and laughter grew louder. More people flowed in as upbeat alternative rock music played overhead. After just a few days in business, Mid City Beer Garden seems to have already gained regulars. And after devouring Chelsea’s Famous Grilled Cheese, I’ll be one of them.