The 2,400-square-foot brewery has high ceilings with dangling string lights, high-top wooden tables and a long rustic bar that seats around 16-18 people. In the tap room, there are arcade and board games and a jukebox. The walls feature vibrant art by local artist Marc Fresh and a quote from Shillings’ late father, Kevin “Gilla” Shillings, above the door, which reads, “Thank you for your time this time. Until next time.” 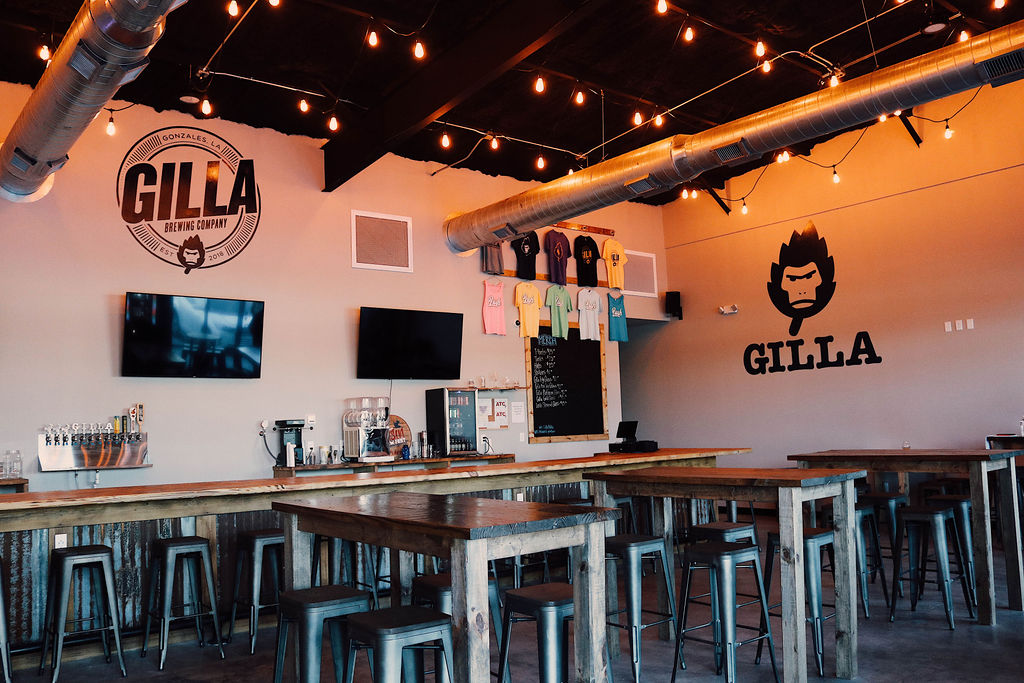 “When my dad was in high school, he was a big guy,” Shillings says. “He was a quarterback, so they started calling him Magilla Gorilla after the cartoon, and eventually his nickname was shortened to Gilla. He was kind of a community staple. He did sports talk radio and TV locally.” Shillings points at the quote on the wall, “That was his sign-off every time he signed off from doing a broadcast.”

Andersen, Shillings and Stewart had all been avid home brewers for more than eight years before opening their brewing company. The small-batch brewery has 12 taps, serving exclusive Gilla Brewing Company beers and guest beers from regional brands like Gnarly Barley Brewing and Parish Brewing Company. Among their own brews are everything from stouts to fruity sours. They collaborated with Baton Rouge coffee company Titan Coffee Co. to create a coffee stout, A Gilla State of Mind.

Gilla Brewing Company serves more than your average beers. Since the nano brewery produces in small batches, it has the freedom to experiment without wasting too much beer, Andersen says. The Thrilla of Vanilla Milkshake is a New England IPA brewed with oats and lactose sugar and Madagascar vanilla beans fermented on top. It has a smooth, creamy taste and is palatable for even non-beer drinkers. The sour beers, known as the Lush line, include fruit profiles like mango, blueberry, passion fruit, pink guava and tangerine.

Locals can try Gilla Brewing Company beers exclusively in its tap room. For now, guests can order the beer by the glass. But eventually, the brewery plans to offer canned options, so people can pop into the tap room and purchase beers to take home.

The nano brewery is hosting its grand opening this Saturday, Oct. 26, 11 a.m.-10 p.m. The event will feature free jambalaya and the LSU football game playing on three flatscreen TVs.

“We’re doing this because we like to do it, and this community needs more craft beer,” Andersen says.