When LSU’s offense takes the field in the season opener, Tiger fans may be reaching for their programs to identify all the new receivers.

The Tigers return only five players with collegiate receptions—one of whom did not play the entire 2017 season. Despite that, the unit looks to be one of this year’s strongest position groups.

“We have very little experience coming back at wide receiver, even though I think we’re very talented there,” first-year LSU offensive coordinator Steve Ensminger says.

Over the past few signing classes, LSU has put together one of the deepest receiving corps in recent LSU history.

“We’re one of the top three talented groups that’s on the [LSU] field,” junior receiver Stephen Sullivan says. “Everybody is big, fast and strong.”

The Tigers’ running game, long the brutal strength of the offense, currently features a running-back-by-committee approach. After years of relying on bell-cow backs such as Leonard Fournette and Derrius Guice, the LSU receiving corps is poised to pick up the offensive slack.

“We haven’t had that depth here,” Ensminger says. “I wish we’d had that depth here last year. We ended up only playing four or five receivers, and with all the motions and [jet sweeps] and everything else we did, at some points you felt like they wore down.”

Standing at 6 feet tall, Giles suits up for the Tigers for the first time this season, after sitting out the 2017 season following his transfer from Texas Tech.

Wearing the illustrious No. 7 jersey, the junior playmaker is the presumed leader of this group—and undoubtedly the most productive, amassing 1,158 yards, 69 receptions and 13 touchdowns during his 2016 sophomore season in Lubbock.

The LSU offense has not produced a 1,000-yard receiver since 2013, when both Odell Beckham and Jarvis Landry accomplished the feat during a 3,000-yard season from LSU quarterback Zach Mettenberger.

Giles calls his quickness his greatest strength as a receiver. During his career, he has primarily been utilized in the slot-receiver position, running quicker and intermediate routes, typically aimed toward the middle of the field.

“You’ve got to have a lot of quickness, because you’re running across the middle a lot in short routes,” Giles explains. “That’s something I use to my advantage going against linebackers who are not as quick.”

The numbers weren’t eye-popping, but they were all highly rated as high schoolers and have shown flashes of brilliance within their limited roles on the offense.

Sullivan jumpstarted LSU’s comeback victory over Auburn with a 1-yard jet-sweep touchdown on fourth-and-goal in the second quarter.

Nine of Dillon’s 14 receptions came on third down.

Ensminger has reiterated to his offensive coaching staff that the receiving corps is going to get its chance this season.

“We’ve got some kids who can run, play and catch,” Ensminger says. “They’re going to have their opportunities.”

Among the younger members of LSU’s receiving corps: sophomore Justin Jefferson, younger brother of former Tigers Jordan and Rickey. He has been drawing rave reviews from his teammates this offseason.

“I remember the first play he got in the [fall camp] game, he caught a deep pass over [cornerback] Kevin Toliver, and from that moment on he has not taken a step back,” Giles says. 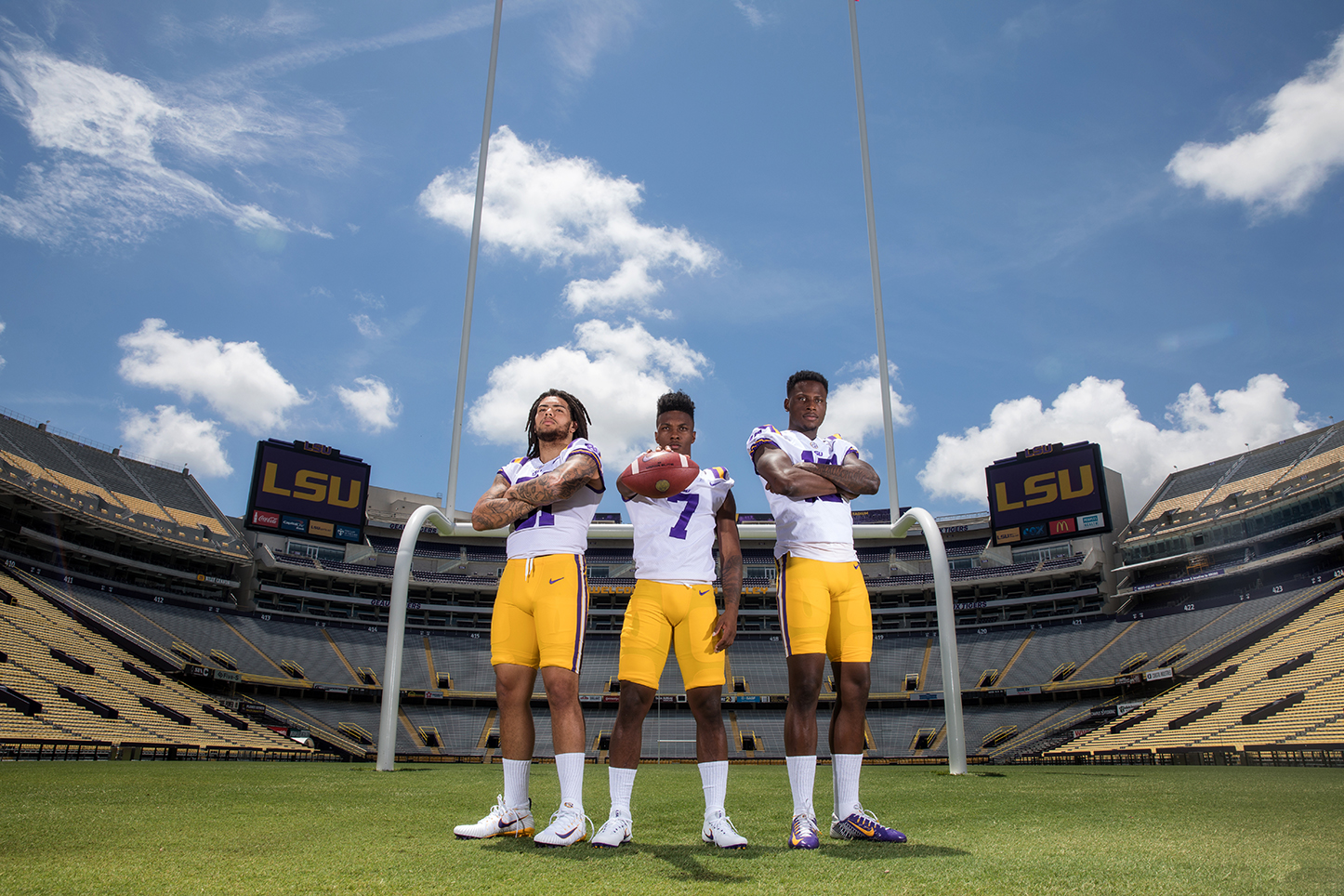 Then there’s the onslaught of LSU’s freshman talent, who will be jockeying for playing time within the deep unit.

Five-star talent Terrace Marshall Jr. was the crown jewel of the team’s 2018 recruiting class: the state’s unanimous top player and listed as high as the
No. 2 receiver in the country.

Sidelined by an injury his senior year, Marshall hauled in 55 catches for 1,250 yards and 15 touchdowns as a junior in 2016.

With the combination of incoming and returning talent in the wide-receiving corps this season, Sullivan is embracing the competition, noting none of his 2017 catches matter when it comes to deciding playing time this year.

“The competition is going to be crazy,” Sullivan says. “We’ve got four-stars, five-stars and freshmen that can play ball. Nobody has a starting spot.”

Giles believes that with the Tigers’ depth and great blend of height, speed and playmaking at wide receiver, they can have up to five receivers on the field at one time.

“We can rotate in and out, and there won’t be a step back,” Giles says. “Depth is one of our biggest strengths right now.”

Depth is definitely what Ensminger is counting on from the unit this season. He says he plans to run a flexible offense that adapts to the game situation, rather than stick to one unsuccessful methodology (i.e. lining up in the I-formation and repeatedly trying to pound opposing defenses).

After sitting out last season, Giles is ready for the receivers to step up and make the most of this 2018 season.

“It’s on our hands to make this offense go,” Giles says.