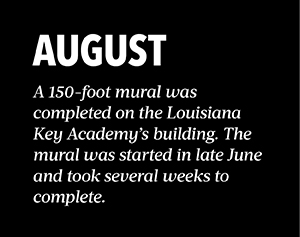 Driving down Government Street, a new mural may catch your eye. Lining the exterior of the Louisiana Key Academy Mural is a 150-foot painting showcasing a row of books alongside reading children. The young children fly and float whimsically along the school’s beige-covered wall. The five of them symbolize the fact that one in five children suffer from dyslexia.

The charter academy’s mission is to educate children with dyslexia, and the new mural celebrates the education and diversity of its students.

The mural is part of the ArtLIFT project, spearheaded by Mid City Redevelopment Alliance and Mid City Merchants to help raise funds for and to support public art. The project also co-sponsored a mural that went up this summer at Millennial Park. The Louisiana Key Academy building provided the biggest mural canvas in Mid City, according to Marlee Pittman, Mid City Redevelopment Alliance’s director of community relations and a Mid City Merchants board member.

“We wanted to activate that big, empty parking lot,” says Pittman, referring to the large lot in front of the building.

Pittman says she and her team approached the school with the idea for a mural. They worked together to develop an idea of what they wanted the mural to portray, and then held open calls for artists to create designs.

Out of those, local artist Taylor Jacobsen of Urban Canvas Studio was selected. As part of his design, students and staff of the school were engaged in creating the idea for the mural and even got to pick which books were showcased, like Dear Mr. Henshaw by Beverly Cleary, A Wrinkle in Time by Madeleine L’Engle and Overcoming Dyslexia by Sally Shaywitz.

“It was really rewarding because they got to choose what represented them,” Pittmam says.

While the mural is stunning and colorful in the light of day, it is meant to be viewed at night. When the security lighting on the building hits the mural after sunset, the children appear to be reading by moonlight.

“I hope it inspires people to understand that all around us, people are helping each other,” Jacobsen says. “They’re helping to build a better community.”

Pittman says she hopes the mural will attract the attention of people driving to work during the day, as well as people coming to enjoy what the area has to offer at night, including spots like The Radio Bar and Elsie’s Plate & Pie directly across the street.

“It’s a very large sign,” she says, “indicative of the importance of education and diversity of Mid City.” midcityredevelopment.org; lakeyacademy.com