THE BASICS: Owner John Haynes and general manager Tadd Swart, former home brewers, aimed for an “art farm” vibe when they launched Istrouma Brewery in fall 2020. Located on Sugar Farms in St. Gabriel, visitors can find an art gallery and tap room inside the bright red barn, and a porch and beer garden with a walk-up station for ordering pizzas, tacos and more.

WHAT’S A MUST: The pizzas are a hit, with a garlicky crust and toppings as traditional as pepperoni and olives and as varied as a deviled egg, pickled okra and even a “corn dog garnish.” The Hoké Poké Sushi Nachos are a surprising and flavorful appetizer. 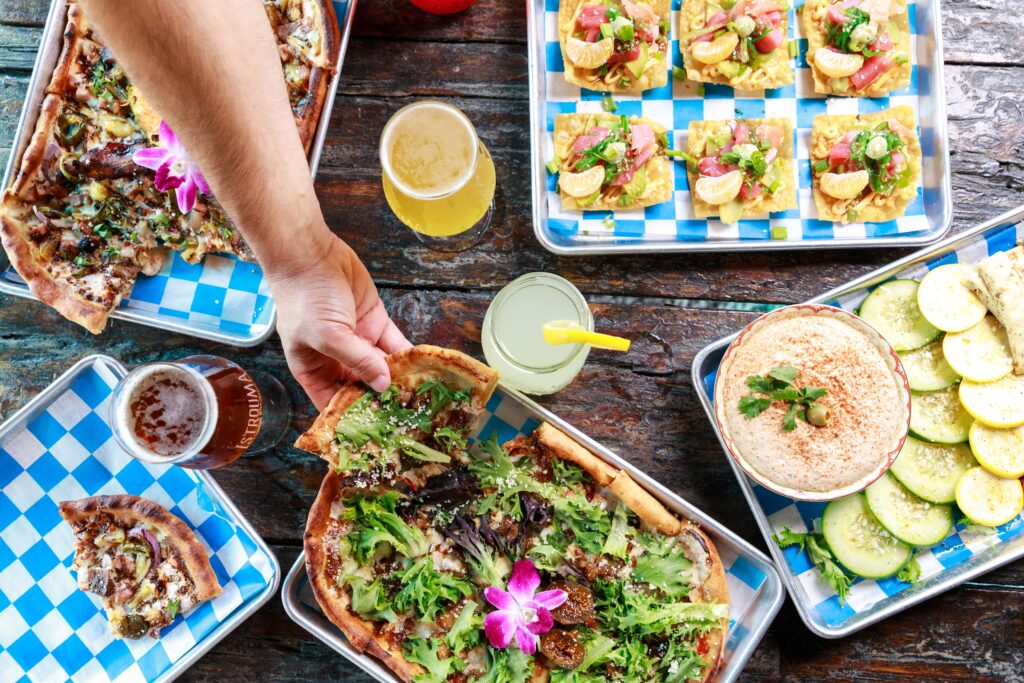 The beer garden vibe is something Baton Rouge has truly embraced in the last decade. Picnic tables under a shady canopy of trees, local brews and snacks, leisurely afternoons with friends playing lawn games.

But Istrouma Eatery and Brewery is not just a beer garden—it’s a beer farm.

On this pastoral acreage in St. Gabriel, you’ll find cows and goats, a ramshackle barn adorned with art, LSU memorabilia, antiques upcycled as bar tables and booths, and, of course, a working brewery supporting a sizable beer menu in its taproom.

While Istrouma began chiefly as a brewery, it recently expanded its name to reflect food offerings that have become as much a draw as the beer. In a small dining area (for those who need AC) and on a porch and courtyard equipped with an army of moveable box fans, Istrouma’s kitchen slings out a variety of pizzas, tacos and shareable items.

The pizza, in particular, seems to get a lot of love on social media.

On a hot June evening, I stopped in with friends to see what Istrouma’s grub was all about.

But first, we needed a drink. The extensive in-house beer menu varies slightly whether you are in the tap room or out on the porch, but some of the mainstays include the Golden Retriever Blonde Ale and the French Quarter Pale Ale, both equally refreshing this time of year.

Housemade lemonades, which also come frozen, provide a non-alcoholic option. On our visit, we tried the blueberry-lavender lemonade, which was more sweet than tart but exactly what was needed for the heat.

Knowing we were going to fill up on pizzas, we opted to start with some of the lighter appetizers.

First up was the Hummus Plate, which caught my eye because its description mentioned chickpeas, butter beans and black eyed peas. Three different versions of hummus? Not exactly. What came out was one bowl of dip, and I don’t think anyone could have parsed out each flavor. What it did have was a lot of tahini. I love that distinct sesame paste, but my dining partners were put off by the bitterness. The hummus came with pita wedges and slices of raw zucchini, yellow squash and cherry tomatoes that were lightly coated in Parmesan and red pepper. All worthy vessels for hummus, but this wasn’t the highlight of the appetizers.

That title went to the Hoké Poké Sushi Nachos. I was curious how a brewery would pull off an Asian fusion dish. Istrouma didn’t disappoint—this turned out to be light, flavorful and well-executed.

Six crunchy wonton wrappers were smeared with a Sriracha aioli then layered with cubes of fresh ahi tuna, avocado, seaweed salad and a dollop of wasabi aioli. Each came with a slice of pickled ginger, too.

I was most thankful the aiolis were applied with a delicate touch to keep this from being a goopy mess. This could be an easy choice for someone who just wanted a snack.

That wasn’t us, though.

We were ready for the pizzas. While the options include two of the just-cheese-and-sauce variety and another featuring chicken, the rest are pork-forward. And we went with that.

First up was the Figgy Piggy. Nestled underneath a generous handful of fresh salad greens was a sweet medley of homemade fig preserves (using the owner’s grandfather’s recipe) and al pastor pork swirled with melted mozzarella and homemade red sauce. The menu mentioned a chimichurri, but I didn’t notice it and also didn’t mind. The pork “butt and belly” al pastor (as identified on the menu) was tender, and the preserves had been pleasingly cooked down into the pizza to offer more depth of flavor.

Next was the Pig Kahuna, which was absolutely overloaded with more of the pork al pastor, crumbly bacon, pineapple, red onions and jalapeno, as well as a balsamic reduction drizzle. Of the two pizzas, this one offered more contrast of sweet, savory, sour and pepper heat.

Right off the bat, the most talked-about part of our pizzas was the crust. It was garlicky and salty with a perfect crunch and very clearly homemade. We couldn’t get enough of it.

If there was one criticism to be found, it was that the centers of the pizzas were soggy from the weight of all the ingredients.

That’s not enough to stop me from going back and ordering more.

And this is the kind of place that makes you want to return, and maybe even bring along friends or out-of-towners. While there, we saw a family gathered around a picnic table for a birthday, a couple of college-age friends arranging box fans so they could cool off and sample beers, and a group of tourists on a day excursion while vacationing in New Orleans.

Istrouma makes for a great escape, and while its brewery is making a name for itself, the food menu here isn’t just an added bonus. The Istrouma team was smart to add “Eatery” to its name. Of all the reasons to visit, it’s hard to argue with giving the food top billing.

About our food critic