You don’t often find South Louisianian and Jamaican and Haitian cuisines in the same restaurant. But after reading about co-owner Angel Lombrage’s heritage, it became clear his French Creole family lineage and Caribbean influence from the family’s stopover in the French West Indies led to a most interesting confluence of culinary influences once they settled here in South Louisiana.

At The Bullfish Bar + Kitchen south of LSU, we kicked off our experience with the Griot and Jamaican Beef Patties appetizers.

Served with pikliz, a Haitian pickled vegetable relish, the Griot’s fried pork bites were slightly crisp from the fryer and tender with barbecue honey notes. Beware of those pikliz, though. The vinegary crisp vegetables will draw you in, but the heat of fresh peppers will shock your tastebuds and scorch your tongue in the nicest way possible.

The Jamaican Beef Patties had a flaky bright yellow, mildly flavored crust with a smear of meat that was ground to almost a pureed consistency. It was quite delightful. A tart salmon-colored sauce accompanied this appetizer, but the patties were nice on their own. The seemingly simple execution made for an interesting and satisfying starter.

Soups loaded with so many greens are rare around town, but that’s what we got with the Soup Joumou. Listed on the menu as the “Haitian National Dish,” and described to us as a warm hearty bowl of goodness, this ample soup of chicken, greens, carrot and potato chunks was filling. The night of our visit was chilly, and it warmed our bellies and stirred our souls. It could easily become your new favorite comfort food.

Moving on to the entrees, the Curry Goat came with a choice of two sides. We went with Plantains and Lima Beans. The tender, firm sweet plantains were a perfect foil to the piquant and slightly salty goat.

I normally find goat too pungent and gamey, but had I not been told this one was goat, I would have assumed it was braised beef. Our other side of lima beans was earthy with a slow-cooked, homespun essence. I was impressed by the amalgamation of spicy, earthy, sweet and salty across all aspects of the entree.

The Jerk Shrimp entree with its succulent brown gravy, had a sneaky spice that went straight to the back of the throat. A side of Caribbean Rice and Peas had the look of a rich jambalaya but with a sprinkling of kidney beans among perfectly separated grains of al dente rice and pops of Jamaican spices. For the other side, the crisp and soft Fried Yuca helped calm the heat while offering a wonderful textural contrast to the rest of the dish’s components.

Thoroughly stuffed and fully gratified, we faced the prospect of dessert. Much like other local restaurants, the only house-made dessert was Bread Pudding, though our server gushed about it so much we had little choice but to order. It was super soft with an overt cinnamon flavor and aroma. Sweetened condensed milk-like sauce added sugary sweetness but little else. Though not made in house, the Key Lime Pie seemed like a nice foil to the Bread Pudding. But it had an unpleasant grittiness and a tartness that leaned more lemon than Key lime.

But while dessert was not Bullfish’s forte during our visit, the restaurant provided a tasty escape from the mundane. And with the uncertainty of if or when any of us can once again escape to the islands, now is the perfect time to run away to a local spot where at least we can get a taste of the tropics. Be careful, though—with the delicious heat this food is exuding, a suntan might come with dinner. 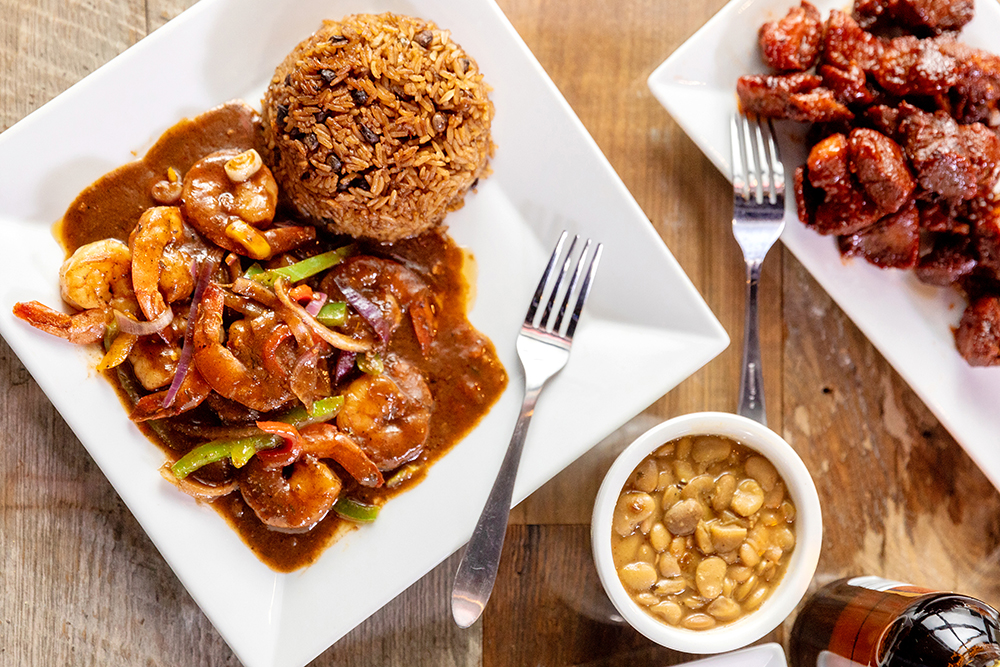 THE BASICS: Owners Angel and Jasmine Lombrage took over Bullfish in summer 2019 and amped up the restaurant’s existing Caribbean theme with dishes from their respective Haitian and Bahamian heritages. It brings a unique twist to the restaurant options just outside LSU’s campus.

WHAT’S A MUST: Warm up with the Soup Joumou, loaded with chicken, greens and potatoes. Snack on the fried pork bites and pickled veggies of the Haitian Griot appetizer. For an entree, the Curry Goat is slow-cooked to perfection, and the Jerk Shrimp is swimming in a spicy brown gravy.

This article was originally published in the April 2021 issue of 225 Magazine.