Baton Rouge resident Matt Beeson of Swamp Dragon Hot Sauce wants his hot sauce to be as big as Tabasco. “Or bigger,” he says.

That’s because Swamp Dragon is different from the leading brands in one key way: It uses alcohol—your choice of bourbon, rum, tequila or vodka—instead of vinegar. And no, you don’t need to show your ID. Not to mention it was concocted right here in Baton Rouge (OK, we’re totally mentioning it).

While Beeson had been a fan of all things spicy throughout his life, other hot sauces had left him disappointed with the acidic taste in his mouth that followed. Using alcohol instead of vinegar, he says, dramatically reduces the acidity while bringing out the food’s natural flavors.

“I found a way to preserve a hot sauce using flavors that actually work with the food instead of fighting it,” Beeson says. “I’ve been saying all along that there’s some kind of way it’s making the food flavor more intense and adding more depth to the flavor, and it turns out it’s scientifically sound to say that.”

Beeson believes in his product so sincerely that his enthusiasm is contagious. Especially once you taste it. I tried what I thought was an unlikely pairing: crawfish mac and cheese with the Bourbon Dragon. In just one bite, I was able to sense how the sauce subtly but gradually built up the level of heat—but not too much heat. That spiciness then slowly died down, leaving me more than ready for the next bite.

Even if you’re one of those Southerners with the spice tolerance of a Northerner, you’ll be able to enjoy Swamp Dragon Hot Sauce. Unlike specialty hot sauces aimed at fanatics looking to feel pain, Beeson has designed his sauce to be one that pretty much everyone can enjoy.

“This is explicitly not competitive-style heat,” Beeson says. “In that market, there’s this hyper-masculinized, angry thing going on, and my target audience is the wide world of adventurous, happy people who like to try new things, looking for some cool flavors.”

Along with that friendly approach is the company’s mascot Marvin, a wide-eyed baby dragon seen on all of the Swamp Dragon hot sauces and merchandise, designed by Beeson himself.

Marvin shares a name with Marvin Moncada, a research associate at LSU’s School of Nutrition and Food Sciences, who helped influence Beeson’s decision to start his own company.

After years of research and months in the LSU Food Incubator, Beeson developed the final Swamp Dragon recipe while experimenting in his kitchen one weekend. “I sat down with my wife on a Saturday and was like, ‘Throw the rulebook out the window. Let’s just mix some stuff up,’” he says. He kept mixing peppers until he got the heat index he wanted, and Swamp Dragon was born.

Once the recipe was perfected, Beeson had half a year of legal hurdles to jump through before he could start selling the sauce. After phone calls and in-person visits to numerous agencies and even a letter to Sen. Dan Claitor, R-Baton Rouge, the product was officially on the market by September 2017. 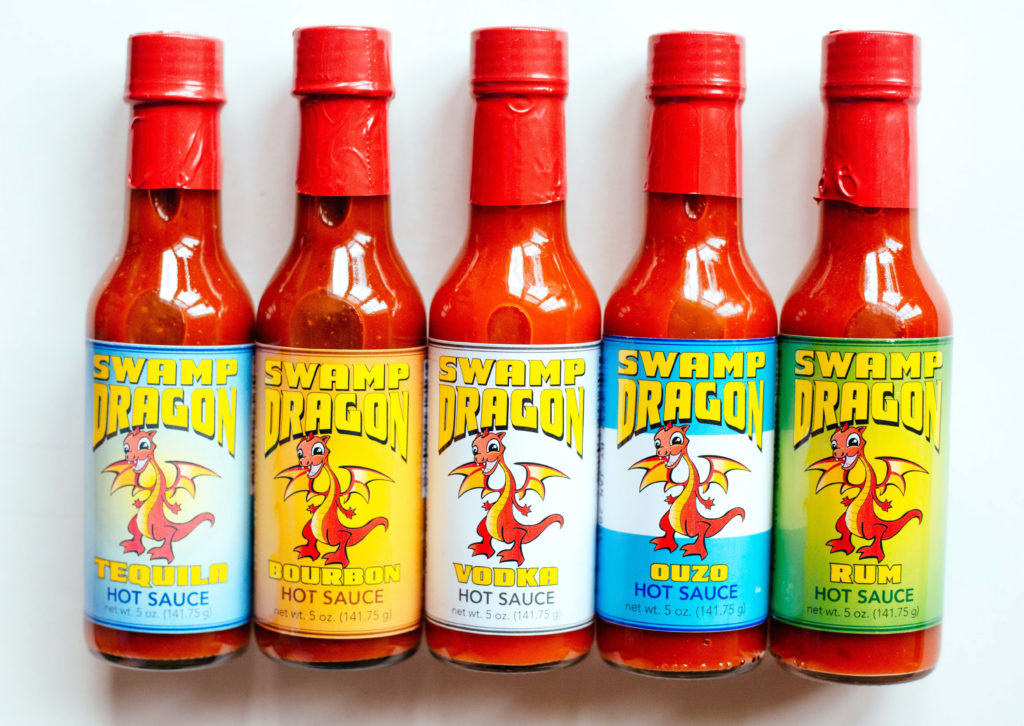 “I refused to sell it at all until I was sure men with dark suits and guns weren’t going to come after me,” Beeson jokes about the process.

Swamp Dragon is sold at Rouses, Alexander’s Highland Market, Calandro’s and Bet-R, as well as in Lafayette, but Beeson continues to travel across the country to national trade shows, in hopes of going international with the product.

While Beeson insists the sauce is good on anything (yes, even dessert), some of his favorite pairings include Rum Dragon on fried seafood and Tequila Dragon on “anything Latin,” like tacos and margaritas.

He says Tequila Dragon can help cure a drink that’s a bit too sweet, further proof of the multifunctionality of the sauce. “I honestly think my favorite pairing hasn’t happened yet,” Beeson says. “It’s a whole new world of culinary possibilities.”