The Mansurs on the Boulevard chef’s rare sincerity and kindness won over his competitors, host Gordon Ramsay and viewers.

But there was one segment of viewers who especially took a liking to Motto—those of us back here at home.

The self-taught Loreauville native was one of the four remaining contestants, but surprised everyone when he nominated himself—rather than a fellow finalist—to be eliminated from the competition. While he enjoyed the run, he said it was time to go home.

“I want to raise the culinary standard in Baton Rouge,” Motto said at the time. “That’s what I’ve been working on the last five years. I’m not ready to give up on that.”

Since then, Motto has continued to play his role in elevating the Capital City’s ever-evolving culinary landscape, introducing new innovations and ingredients at Mansurs and serving as a cheerleader for local producers and fellow chefs.

Motto has been asked by a number of charities to help raise money by cooking for events, and he’s enthusiastically accepted.

He’s also been a regular participant in local cooking competitions and gatherings of chefs.

While Mansurs’ menu is made up of bedrock crowd favorites, Motto keeps things interesting with a revolving door of specials that honor not just south Louisiana’s French influences, but its other foodways, as well.

“We have a really great, established menu, but we try to up our game in the specials. It’s really where our creativity goes,” Motto says. “We like to play around with all sorts of different global influences. Our culture is a mesh of different countries, so our food should be, too.”

He’s also started working on a special project with the oyster industry on sustainable farming, the details of which he can’t reveal yet.

“I’ve really come to realize the importance of coastal restoration,” Motto says. “Chefs can play a role in doing something about it.” mansursontheboulevard.com 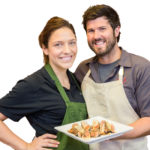 This food power couple met while training at the Louisiana Culinary Institute, later opening the wildly popular Hot Tails restaurant in New Roads and a second concept, the highly reviewed Sac- a-Lait in the New Orleans Warehouse District. They also starred on the Food Network reality show Cajun Aces. After closing Sac-a-Lait in late 2018, the couple has renewed focus on the Capital Region with a much-anticipated second location of Hot Tails opening this year in Prairieville. Sam was also recently named executive director of the Louisiana Seafood Promotion and Marketing Board, giving her a key role in promoting Louisiana’s native seafood to domestic and worldwide consumers.