Chad Hebert loves watching people’s faces as they fly in a hot air balloon for the first time.

“That moment when you first break over the tree line while climbing to altitude and see fear leave their face and excitement set in—there’s nothing like it,” he says.

Ballooning is a long-held tradition in Hebert’s family. Every weekend at Really Hot Air Balloon Adventures, three generations of the family and their friends take riders into the air. In bright yellow balloons, they lift off into clear, golden skies over Zachary. 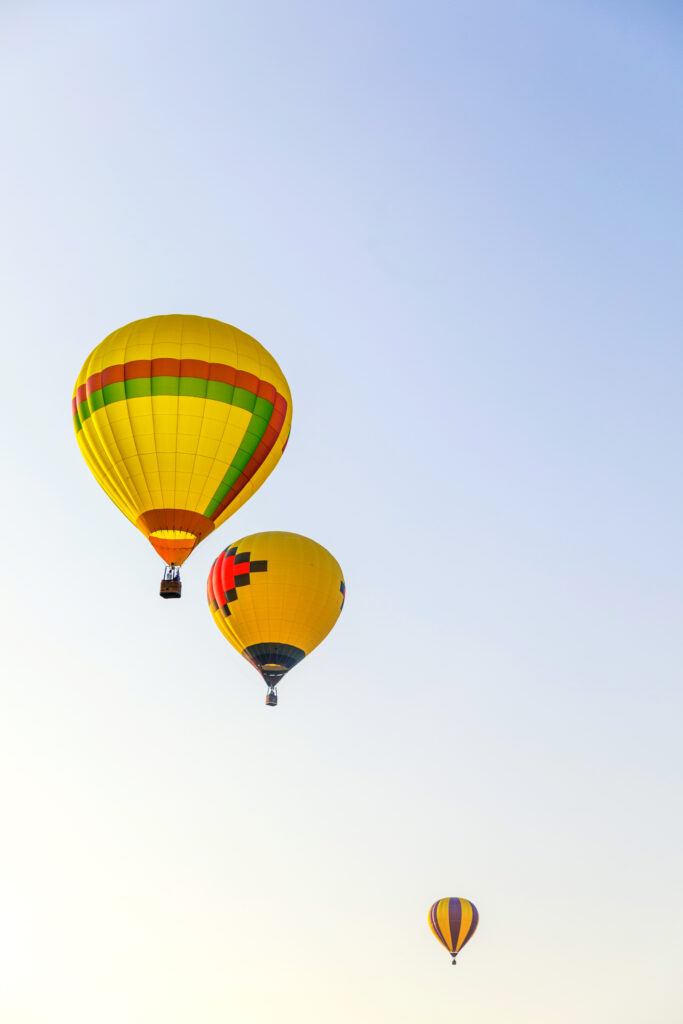 “There’s nothing like it.” — Chad Hebert, Really Hot Air Balloon Adventures in Zachary

Flights depart at sunrise and last 45 minutes to an hour, depending on the winds. As the sun rises over the horizon, riders can see the houses in the Zachary neighborhoods below, like tiny dots among the region’s green trees and fields.

Once safely back on the ground, customers are treated to a brief history of ballooning, complete with a celebratory glass of Champagne.

For the staff, it’s a laborious, team process. The group helps set up the basket, inflates the envelope, tracks the balloon in the sky and communicates with the pilots through a two-way radio. A successful balloon ride is heavily dependent on the weather. Ground winds should be below 6 miles per hour, with no rain, fog or fast winds in the forecast.

Once the balloon starts to land, the crew works to catch the basket and welcome the riders back to the ground.

But all the effort is worth the reward.

“I love it when the riders land, and I get to see their faces. It’s my favorite part knowing that it’s something I love to do, and I get to share it with dozens of people,” Shawnel Hebert says.

The art of ballooning is a family-hobby-turned-business going back four generations.

Really Hot Air Balloon Adventures got its start in the 1980s, when Phillip Branstuder, a retired helicopter pilot for the Army National Guard, visited a balloon festival in Baton Rouge and discovered a new way to fly.

“(My father-in-law) had several tours in Vietnam, and when he got out of the army, he realized helicopters were expensive to buy, operate and maintain,” says Shawn Krause, who is today a pilot at Really Hot Air Balloon Adventures. “You couldn’t do it on a retired army officer’s salary. So, when he visited the U.S. National Balloon Festival, he figured this wasn’t a helicopter, but it was a way to get him back into flying.”

Branstuder’s granddaughter Shawnel Hebert remembers traveling to different balloon festivals as a child after Branstuder bought his first balloon in the 1990s. Shawnel says it was a family hobby they all did growing up. But as they got older, extracurriculars took over and ballooning took the backseat.

In 2012, after a decade-long break, Shawnel, her brother and her husband, Chad, met up with some ballooning friends at the Pennington Balloon Festival in Baton Rouge. They asked Krause if they could bust out the old gear and get back up in the air.

“Dad said if the equipment was good and passed its inspection, then we’ll go back to flying,” Shawnel says.

In 2013, the family re-certified their equipment and purchased and custom-designed a new balloon. Krause began teaching his son and son-in-law how to fly. Eventually, the two obtained their private pilot’s licenses.

Chad went further, obtaining his commercial pilot license. This allowed him and his father-in-law to take passengers on paid flights.

Just before the coronavirus pandemic began, the family started advertising rides to folks around the Zachary area.

“In 2019, it was like a can of worms opened up, and we started booking left and right. Now, on average, we’ll stay booked months at a time,” Shawnel says.

“My dream is to ultimately be able to teach my kids not only to fly but to be responsible pilots and one day pass it on to them, just like my father-in-law did for me,” Chad says.

Now the family’s patriarch, Krause says even though he’s older and has grandkids, he’s not finished flying just yet. He has a responsibility to the ballooning community.

“I want to do my part to bring the next pilot up,” he says. “We’re in a plateau right now. We need more of us in the air.”