Baton Rouge has a self-esteem problem.

At least, that’s what Renee Chatelain, president and CEO of the Arts Council, says. In the past, it has been difficult for the Capital City to find its cultural identity, seemingly living in the shadow of New Orleans.

The Ebb & Flow Festival is trying to change this perception. What originally began in 2017 as a two-day art and music festival is now transforming into an entire season embracing culture, art and innovation in the Red Stick.

The Ebb & Flow Festival season spans March and April, encompassing many local festivals put on by other groups. Events like this month’s Third Street Songwriters Festival and the Baton Rouge Blues Festival fill both the streets of the city and plenty of springtime weekends.

And right in the middle is the Ebb & Flow Festival itself, a two-day event sprawling across the downtown area and showcasing Baton Rouge’s varied arts scene. 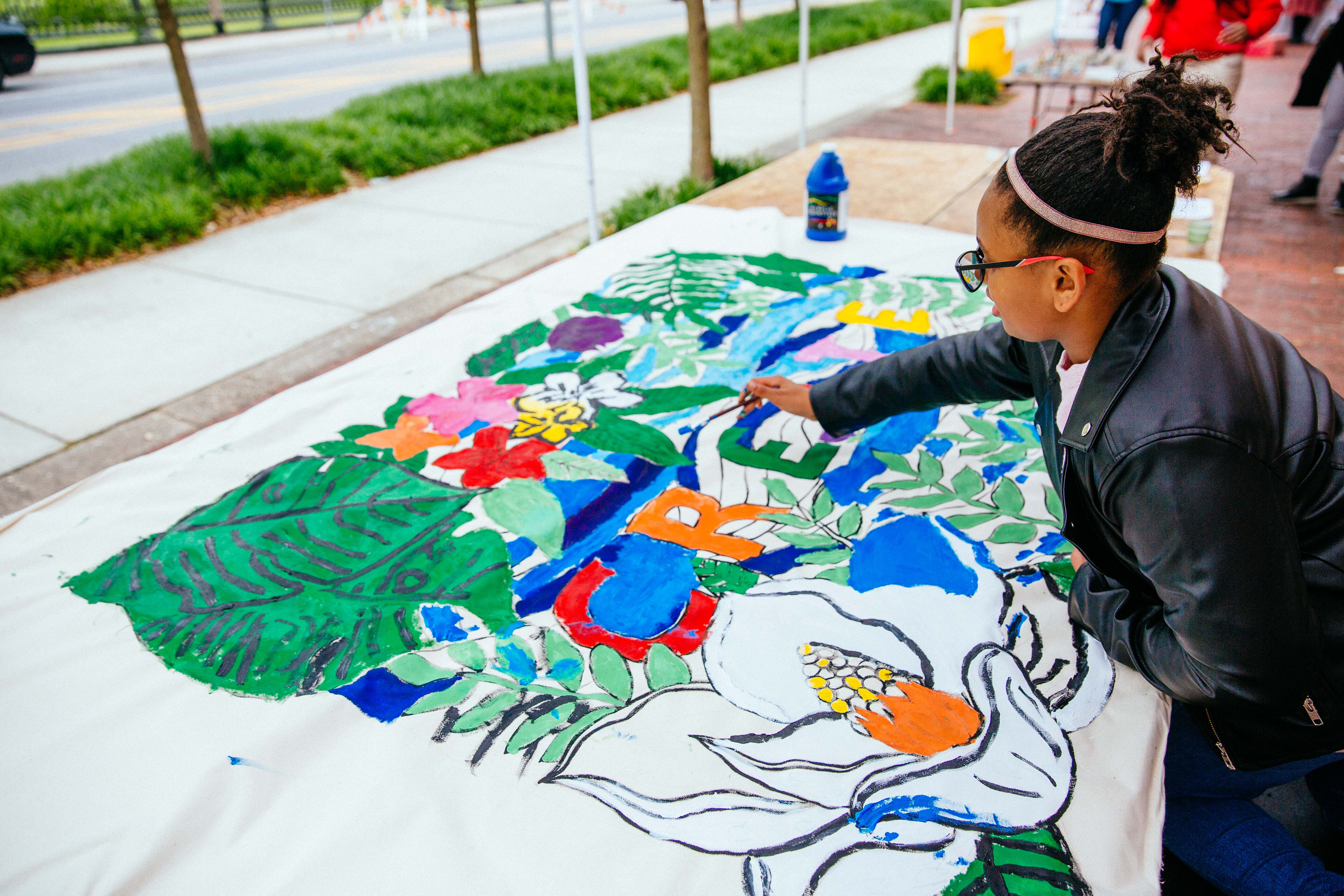 Since its beginnings, the festival has always tried to set Baton Rouge apart. In its first year, it celebrated water ecology and the city’s location along the Mississippi River. In its sophomore year, the festival emphasized Baton Rouge’s global reach, tying the event to the Amazon and South American culture.

But in its third year, the Arts Council staff has realized the essence of Baton Rouge lies right within the city.

“We don’t need to create what is already fantastic here,” Chatelain says. “We need to strengthen the local talent and connect it to the local economy.”

It’s this connection that has seemingly led Ebb & Flow to partner with other local events, with the Arts Council helping to promote them all under one large umbrella.

“As the Arts Council of Greater Baton Rouge, we are the overarching agency,” Chatelain explains. “We should be looking down from 30,000 feet at what makes our city great artistically and support that.”

For the Arts Council team, meeting that goal has meant a lot of time spent ensuring the Ebb & Flow Festival includes all aspects of the Baton Rouge arts scene. Spanning the entire downtown area, guests can enjoy live art creation, musical performances, arts markets, kid-friendly areas for children to get their creative juices flowing, poetry readings and much more.

The festival will also serve as the debut of the Baton Rouge heART trail, a semi-permanent walking trail through downtown with art installations and mixed-media displays along the way that will remain after the festival is over.

“It feels like a love letter to the city,” says Rhaea D’Aliesio, community engagement coordinator for the Arts Council. “It takes about an hour to walk and a half hour to run, and you pass so many historic places, cute houses and garden spaces, government and public buildings. There really is a sense of feeling like you are a part of something when you are participating in that.”

The council hopes to prove that through this showcase of art, music, innovation and culture, Baton Rouge is an enticing choice for businesses and permanent residents.

“It shows that this is what happens when you take arts and culture and put it in a setting where you are promoting your local talent and also making the quality of life here enticing,” Chatelain says. “You’re going to get immediate attention on a national level, and that is already happening here.”

And maybe, just maybe, showcasing our culture can solve that little self-esteem issue the council has been working so hard to resolve.

“We may not be the party capital, but this city is innovation and inspiration,” Chatelain adds. “That is who we are.” ebbandflowbr.org

THE WEEKEND ROSTER
There are many new and exciting features debuting at this year’s Ebb & Flow Festival, April 6-7. Here’s a sneak peek.

Art all over
Forum 35’s annual Art Melt is joining the Ebb & Flow weekend with a new iteration of its juried art festival, called Art Flow. More than 50 venues around downtown and across the city will showcase works by the selected Louisiana artists. People can check out the pieces and vote for their favorites using the FlowBR app. Elsewhere at the festival, there are two
art battles set for the weekend. Artists from Les Jeunes Artistes de Louisiane will battle it out on Saturday, while Sunday will host a Corporate Art Battle, where local businesses can get their creative juices flowing in an audience-judged competition. An Artist’s Aisle in front of the Shaw Center on Lafayette Street will host plenty of vendors to check out.

Poet’s Pier
Many awesome performances are scheduled for this area on Lafayette Street in front of the Shaw Center, including Red Magnolia Theatre Company, Of Moving Colors, Baton Rouge Ballet Theatre and poetry workshops.

IDEA Stage
The IDEA Stage stands for Inspire, Design, Engineer and Act. This area in North Boulevard Town Square will focus on big ideas that are enhancing the community. The Young Entrepreneur’s Academy will host a trade show presenting its ideas on Saturday, as well as other local organizations talking about their successes throughout the weekend.

Kid’s Coast
For the younger attendees, Repentance Park will provide a variety of activities, including a Ninja Warrior course by GymFitBR, interactive art activities by Knock Knock Museum and book mobiles from local libraries.

The Third Street Songwriters Festival is partnering with Ebb & Flow this year to provide music throughout the weekend. Take a walk down Third Street and duck into venues from Florida Street to North Boulevard to see performances all day and night. Artists such as Jeffrey Steele, CJ Solar and Blake Griffith will perform. See the full schedule at thirdstreetsongwritersfestival.com.

After more than six years of showcasing local films and filmmakers, the Louisiana International Film Festival’s board of directors decided to call it quits due to lack of funding, festival director Elliott Estelle says.

This year’s seventh film festival was scheduled for this month before organizers canceled it in March. Now, the film festival is collaborating with the Arts Council to show select films at the Ebb & Flow Festival. Five feature films and several shorts will be chosen from the original 200 film submissions to be shown at participating venues downtown during the festival, Estelle says.

“I thoroughly poured my heart and soul into working for LIFF,” Estelle says. “I gained so much appreciation for bringing the art of cinema to places that typically don’t get it. There’s something really special about providing that kind of gift.”

Plans for the screenings were still being finalized at press time. Find more information on Ebb & Flow’s website, ebbandflowbr.org.

Click here to head back to our festival headquarters.