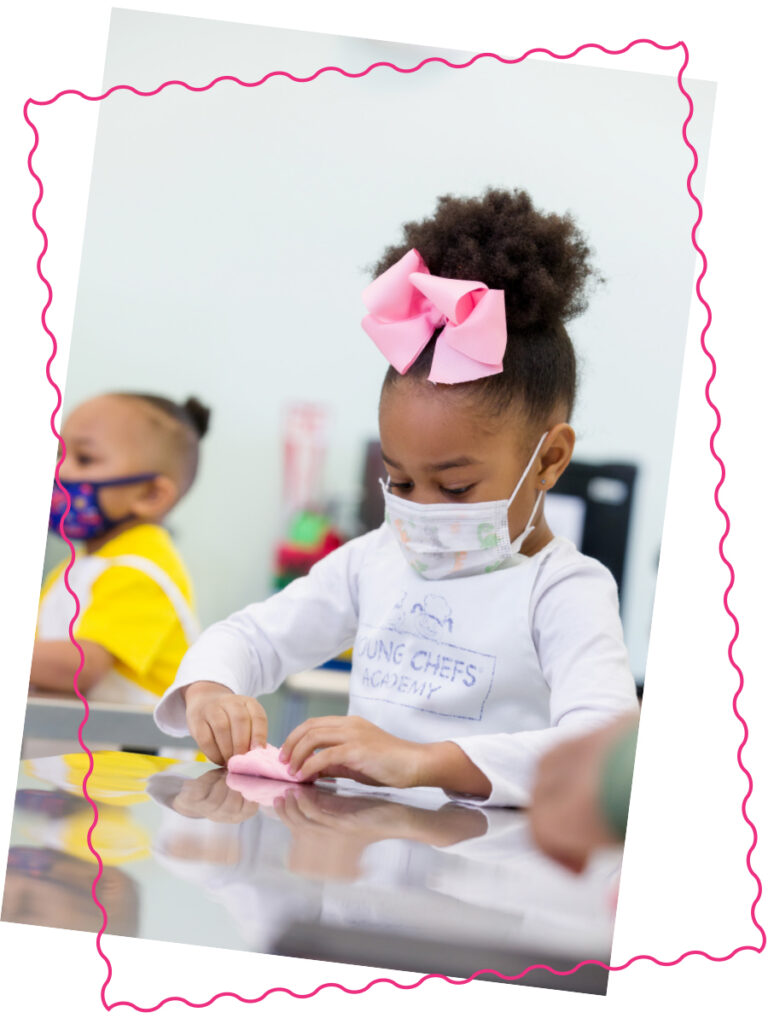 Owner Gay Nan Moree, a former middle school home economics teacher, is about to show them how to make tomato soup and heart-shaped grilled cheese sandwiches.

They work together, sautéing onions and garlic for the soup, and carefully combine these softened vegetables into a blender, along with canned tomatoes. Once the mixture is smooth, they pour it back into a saucepan and add a little cream.

“It tastes just like La Madeleine,” one student says.

With the soup finished, they turn to the sandwiches, which they cook on low heat in order to melt the cheese to a gooey texture without burning the bread.

Since Moree bought the Baton Rouge franchise of Young Chefs Academy in 2009, she’s been on a mission to show children and teens—and their parents—that cooking together isn’t a lost art. The Bocage area business offers cooking sessions, summer camps and birthday parties, all of which give children a chance to try their hand at cooking.

Moree draws from plenty of easy, kid-friendly recipes, like glazed sugar cookies, mini pizzas, and empanadas made simply from canned biscuit dough. She’s been a crusader for letting kids learn to cook at home—even if it feels inconvenient.

“Parents are so busy that they don’t take time to cook or show their kids how,” Moree says. “I hear it all the time. A lot of families are eating on paper plates in front of the TV.”

Don’t be daunted, Moree says. Start with easy recipes and basic tasks, and youngsters will pick up skills quickly. batonrougela.youngchefsacademy.com

Tips for Cooking with Kids

One of the most common mistakes parents make is taking over for their children. “I watched a dad once totally decorate a gingerbread house his son was working on because he wanted it to look a certain way,” Moree says. “Kids aren’t supposed to know how to do things perfectly, and they won’t improve unless we let them try.”

Moree marvels at the number of kids and teens who have never measured an ingredient, or who are unfamiliar with kitchen staples. Start with basics, like measuring, stirring and whisking. Discuss the function of common kitchen utensils. Go through your pantry, pointing out your favorite ingredients and how you like to use them.

Don’t feel like you have to tackle long, complicated recipes. Start with simple projects, like pizza kits, three-ingredient spaghetti or blender milkshakes. Most kitchen lessons can be gleaned from the simplest tasks.

Moree shows her students lots of recipe shortcuts, including how to make apple turnovers from crescent roll dough, sliced apples and cinnamon sugar. Even if you’re a kitchen purist, embracing convenience foods can make the experience less stressful and more fun.

Make a moment of the mess

Kids are going to make a mess in the kitchen, but don’t let that be a dealbreaker. Embrace the mess as a teachable moment. Show children how to clean up as they go.