From the pandemic’s earliest days, the need to stay socially distanced and safe gave golf an advantage over other contact-driven sports. It’s part of why local golf courses have seen increased activity over the past year.

BREC’s courses have been busy, says BREC Golf director Mike Raby. Though BREC had to shut down the courses for five weeks during last spring’s stay-at-home order, people were able to walk the courses and get outside.

“When we re-opened,” Raby says, “everyone was anxious to play golf. And they played a lot.”

Across BREC’s six golf courses, total rounds played were up 17% in 2020, according to Raby. It’s a continuing trend—February 2021 saw even more action than the pre-pandemic days of February 2020.

“Golf, as an outdoor activity, is naturally socially distanced,” Raby says. “When four people come to play, they’re around each other a little at the beginning and end, but they’re mostly on their own program.”

The experience levels of players has been plenty diverse, too. Seasoned golfers started playing more frequently at BREC; people who played when they were younger took the sport back up; and the courses also saw a fair amount of new players, Raby says.

“This is something you can do outdoors, you get some exercise—and it’s a social activity,” Raby says. “A lot of the things you couldn’t do in 2020 were social activities.” 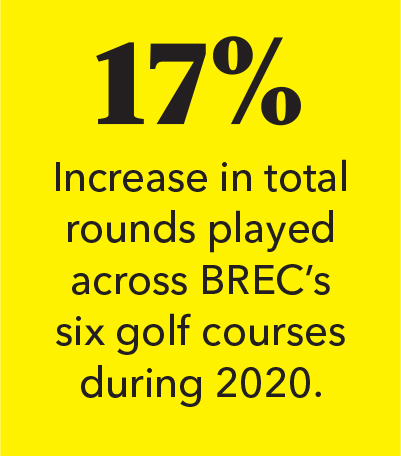 “I think more people are playing golf because more people are working from home and traveling less,” Jacks says. “They have more time on their hands. We’re seeing more people wanting to staycation and enjoying the club more often.”

“It’s been more popular in the last nine months than the months prior,” says director of operations Paul Howard. “I think the entire sport has benefited, because it is primarily an outdoor sport, and people are feeling safer in open-air situations where there’s natural social distancing.”

Topgolf has been able to continue hosting small birthday parties and celebrations. Groups can be separated into different bays, with barriers providing social distancing.

The presence of venues like Topgolf and the newly announced GolfSuites, expected to open at an unspecified date on a nearly 17-acre site on Siegen Lane, has also helped to increase popularity at traditional golf courses, Raby says.

“We were thrilled to hear Topgolf was coming to Baton Rouge, along with GolfSuites,” he says. “Topgolf got people who played golf when they were younger and stopped to do it as a social event. We see Topgolf as a feeder system that gives people exposure to golf.”

Raby expects GolfSuites will do the same.

“I think a lot of people are trying it and enjoying it,” Raby says. “That’s the big thing for us, just seeing all these people come out and enjoy themselves.”