Along the oak-canopied streets of Baton Rouge’s established neighborhoods, where mature camellias and towering crepe myrtles separate lawns, bulldozers are tearing down older homes to make way for new construction. The draw of the location and the foliage cannot be duplicated in newer neighborhoods further out from the city’s core.

But demolishing a dated, 1930s house on Terrace Avenue was not an option for Bridget Tiek and her family. Just like the old trees, the character of the home could not be duplicated and the history could not be replaced.

“We knew that it was going to be a big project going in,” Tiek admits, noting that the elderly woman who listed the house was only the home’s second owner. “The plaster walls were damaged, and there was no central heating and air. But it was a historic home. We didn’t want to see it torn down.”

In fact, they were so passionate about purchasing it, that when it went on the market as a sealed bid auction, Tiek’s mother, Cindy Tiek, wrote a letter to the proud homeowner to share their plans to enhance it.

“I told her that we were dedicated to bring the home back to its former glory,” says Cindy, who owns the interior design firm Tiek and Co. alongside her daughter. “Others wanted to take it down and build a McMansion or possibly even a multi-family residence. But we could see potential.”

The potential was as great as the work ahead of them. The mother-daughter team collaborated, creating plans to carve out a master suite from the former front-loading garage. Floors were stripped, the kitchen was gutted, a guest bedroom was turned into a media room, and storage was installed. Bridget’s husband, Gregory Dupuis, as well as her father worked tireless hours to help in the demolition and construction.

On left: The media room was carved out of a former downstairs bedroom, and was a must for this family. Storage cabinets (unseen in photograph) hide electronics, a laundry area and air ducts for the A/C. “This is where my daughter and my nephew live the most,” says Tiek, noting that she picked a forgiving fabric for the sofa. A painting on the far wall is by Nicole Cotton.

On right: Tiek created a dining nook with a banquet in an area where a former kitchen table used to reside. This bright and sunny space is perfect for early morning coffee. The banquet works double duty as seating and storage.

“The house dictated a lot of what we needed to do,” Tiek says. “It’s a Spanish Revival-style house, so I didn’t want to turn it into something that it is not. Even though my style is very contemporary, I didn’t want to put high-gloss white everywhere.”

They kept the character of the home, stripping all original doors and hardware for reuse, restoring the original millwork, and keeping the charming arched doorways and niches throughout the living spaces. They even went so far as to painstakingly refurbish the steel-casement windows that had rusted out.

“Laborers spent two months grinding and stripping the metal off the casement windows,” Cindy says. “Half of the glass was broken. A welder had to recreate the missing pieces. It was a lot of work.” 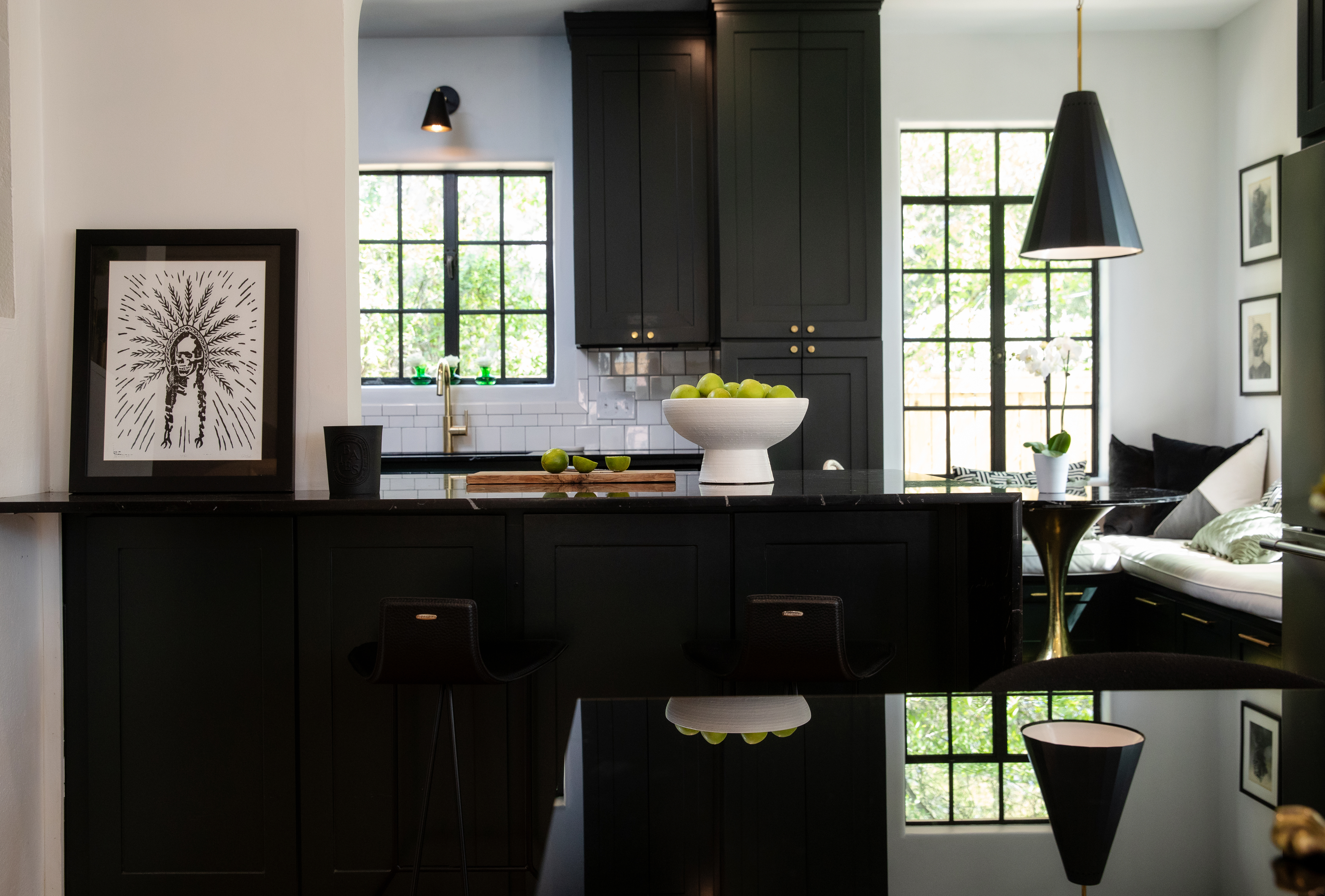 The kitchen in the original house was a tiny walk-through galley, with only a sink, a few cabinets and a range. Tiek closed off one wall and opened up another to create a more usable floor plan. Custom cabinets, a herringbone pattern on the porcelain floor, and black marble countertops create an art deco vibe.

But it was work well worth it for Tiek and her family, who now enjoy a perfectly proportioned house that they had a hand in creating.

The months of hard labor and detailed decision-making have resulted in a classic home with a contemporary vibe. And one step out the door to the tree-lined streets reminds her why she put all the work into this mature home to begin with.

“You can’t get the character of an old house like this in a new house. There is a general feeling that is lacking,” Tiek says. “I wanted it to feel updated and more modern, but I appreciate history. And this house, and this neighborhood, has plenty of history.”

See more photos of this home in our gallery below: