In just one word: Angelic

Office buddies: Anyone with whom she comes in contact.

Performance bonuses: Unfortunately, Lucy is allergic to just about everything and gets a monthly shot to minimize symptoms. So treats are off limits. She’s known to snag one of her own, though, when children in her home forget to bring their plates to the sink.

Obsessions: Sleep. She spends each night in a different bed. When snoozing with her parents, she makes her way under the covers, head planted on a pillow. She isn’t much of a morning dog and is usually the last one out of bed each day. 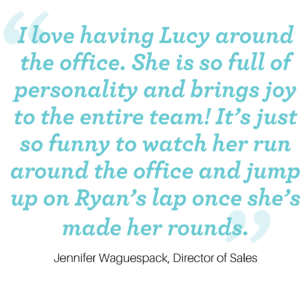 Favorite getaway: This is one well-traveled pet. From the hunting camp, to the river, to skiing, she’s included. She’s even been offshore fishing—and loved it.

Forgivable flaw: Lucy is perfect, of course. She has no flaws.

Company bio: Lucy was a complete surprise when she appeared at the Engquist home on Christmas morning two years ago. Neither Ryan nor the children were aware of her impending arrival. Ryan was not a fan of petite dogs at the time and was, he admits, less than excited about the newest addition to the family. Three days later, one of Ryan’s daughters put Lucy on the couch with her father as he watched the news. “I made the mistake of making eye contact with her,” Ryan says, “and it was all over after that. Now, we seldom go anywhere without her.”