George Strain remembers well what his Morning Glen neighborhood off Siegen Lane looked like during the flood of 2016.

“Our street flooded up to the level of the bottom of the mailboxes. It was about 3 to 4 feet deep, and vehicles couldn’t get through,” says Strain, professor of neuroscience at the LSU School of Veterinary Medicine. “My son, who lives down the street, and I had to use a kayak and canoe to get us out.”

Fortunately for them, the Strains’ houses were some of the few in Morning Glen that escaped flooding that year. But this May, when the Capital Region experienced an unexpected flash flood, the family wasn’t so lucky. Both Strains houses flooded this time due to a backup in Ward Creek, which runs behind the subdivision and absorbs water from its culverts.

As George Strain watched the water continue to rise and creep into his home, he and his wife, Pat, bagged what they could and got out, walking through thigh-high water until they found the closest high ground their daughter could reach by car.

What happened the next day at the Strains’ home, and in hundreds of homes and businesses around town, was the same narrative that had played out thousands of times in August 2016: the long, tedious process of cleaning up. Friends and family descended on the Strains’ home and removed saturated sheetrock, ruined household items and furniture, piling it all up on the curb to be hauled away.

“Those piles represented years of our lives,” Strain says. “It was very emotional. But we’re trying to look forward, not backward.”

Five years ago this month, an unnamed, slow-moving storm system camped out over the region for two days, unloading record rainfall, including more than 19 inches in Baton Rouge, according to NOAA. Areas to the east of the Capital City saw higher totals. The city of Watson saw more than 31 inches of rain, and Denham Springs was inundated by more than two feet of downpour. Swollen rivers, creeks and tributaries simply couldn’t hold the continuing rainfall, their banks overtopping and pushing floodwater into scores of homes and businesses. When it was all over, the freakish weather event had uprooted tens of thousands of families, totaled cars and cost homeowners untold sums in repairs.

But it also revealed the area’s tireless generosity. Neighbors helped neighbors. Churches and volunteer groups provided labor and meals. Millions of dollars were raised from local and national donors that went to flood victims and area nonprofits.

The storm was categorized as an anomaly—a one in 1,000-year event in the hardest hit locations—but it foretold the vulnerability of an area awash, quite literally, in bodies of water. Greater Baton Rouge is its own water world, its mostly flat topography crisscrossed by bayous, canals and channels that take on rainfall and water flowing from the north, sending it on to destinations to the south.

But just like Baton Rouge’s gridlocked roads, its bodies of water are choked with obstructions. Solving the complex problem of how to improve the manner by which water drains through the parish continues to be one of the biggest issues facing the community.

“I knew when I took office that my administration would need to roll up our sleeves and get to work to address our drainage infrastructure,” Mayor Sharon Weston Broome says. “We’ve started to roll out some of those projects, certainly not as soon as everybody would like. But contrary to popular belief, we’re going at a pace and a process that, for the most part, has been dictated to us.”

As we saw (in May), things are not going to get better, so we cannot kee spending money on flood risk reduction in the same way we have before.

Some of these storms, you talk about 50-year storms or 100-year storms, well, they’re happening two times, three times a year, and that ain’t good. You’ve got to look at some ways to reduce the flood risk.

[—Fred Raiford, city-parish director of transportation and drainage, in a July 7 article by The Advocate]

The slow pace, say Broome and EBR Director of Transportation and Drainage Fred Raiford, has been influenced by the requirements that accompany federal funding, including conducting environmental surveys to ensure any work doesn’t affect the natural landscape.

“The length of time it takes to get it done is frustrating,” says Jim Urdiales, whose Mestizo Louisiana Mexican Cuisine has flooded four times since 2016, including during the May storm.

The South Acadian Thruway building home to Urdiales’ popular restaurant was constructed in 1969 and sits at a lower elevation than most buildings in the immediate area, Urdiales says. It’s especially vulnerable to flooding when nearby Dawson Creek rises.

“The silver lining of the May event is that it’s on a lot of people’s minds,” Urdiales says. “This is a long-term problem, and it needs long-term thinking.”

An ambitious 20-year Stormwater Master Plan for the parish is using FEMA funding to better understand the flow of water around the city. And while we won’t see the final draft of that assessment for another year, the city is currently trying to create a clean slate in preparation for any resulting projects. 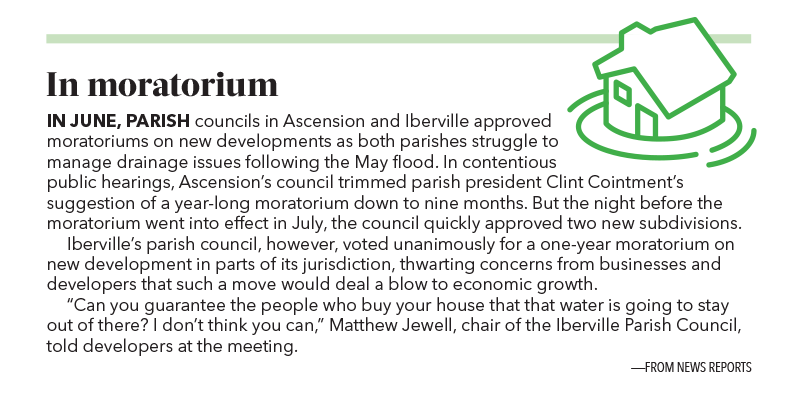 The Army Corps of Engineers will also begin construction on the Five Tributaries Project in the next few weeks, with “clearing and snagging,” or removing debris, logs and other obstructions from Jones Creek, Ward Creek and Bayou Fountain, Raiford says. Two other tributaries, Beaver Bayou and Blackwater Bayou, are currently under environmental review and will be addressed later. All told, the project addresses issues along 66 miles of tributaries that drain into the Amite River, and ultimately, Lake Pontchartrain. These waterways are responsible for carrying stormwater from three-quarters of East Baton Rouge Parish, Armstrong says.

The city has also secured funding to create two watershed conservation projects at Bayou Duplantier and Ward Creek. The areas will be maintained as floodplains and future development will be prohibited within their boundaries. Environmental recreation could be introduced at Bayou Duplantier, which connects the LSU Lakes to Ward Creek.

Future flooding across the parish is a likely possibility, admits Broome, whose own home flooded in 2016. Extreme rain events increased by 27% between 1958 and 2012, and their frequency is projected to increase everywhere in the United States, according to the federal government’s National Climate Assessment.

“Water is a way of life for us here, and we have to continue to manage it,” Broome says. “The drainage projects that are underway will help us build a more resilient community.”

In the meantime, families like the Strains—and many others—will be focused on putting their lives back together and preparing for the next big weather event.

Stay on top of the city’s progress in improving drainage by visiting stormwater.brla.gov

A $15 million assessment of the entire drainage system in East Baton Rouge Parish, which FEMA began funding after the 2016 flood. Expected to be completed in late 2022 by engineering firm HNTB, it will identify problem spots and potential solutions, though it will not include funding for the projects to correct those issues.

A long-gestating Army Corps of Engineers project to reroute floodwaters from the Comite River west to the Mississippi River rather than south into communities like Zachary, Baker and Central. Many residents complained that the canal could have prevented some damage from the 2016 flood, had it not been mired in decades of federal red tape. In June, it hit another snag over the costs and logistics of relocating a major gas pipeline in its path. The obstacle could delay the project past its initial late 2022 completion date.

Another Army Corps of Engineers project that aims to improve conditions in Jones Creek, Ward Creek, Bayou Fountain, Blackwater Bayou and Beaver Bayou. These five waterways, which are considered “sub-basins,” handle three-quarters of the stormwater drainage through the parish. Work is already beginning to clear and widen the channels of Jones Creek, Ward Creek and Bayou Fountain. Beaver Bayou and Blackwater Bayou are still under environmental review.

In May, East Baton Rouge Parish secured $14 million through this statewide initiative to acquire 200 acres of land along Bayou Duplantier extending from the southern end of University Lake to Ward Creek, and 140 acres along Ward Creek at Airline Highway Park. Both conservation projects will keep the areas from being developed and aid in flooding mitigation.

The future is mobile for these Baton Rouge area boutiques