Live bands, colorful decorations, creative costumes and fun throws usually spell out Mardi Gras this time of year. But with COVID-19 putting a dent in everyone’s plans, you might not be “throw me something mister” -ing until 2022.

Mid City, however, wasn’t going to let that stop the fun. Over the weekend, krewe members and area residents alike decked their houses—and themselves—with all of their favorite Carnival decor for the Mid City Gras reverse parade. Dubbed the MASK-erade, Sunday’s event allowed revelers to drive, bike or walk by the decorated homes and pick up goodies from a safe distance. Here’s a peek at all the fun. 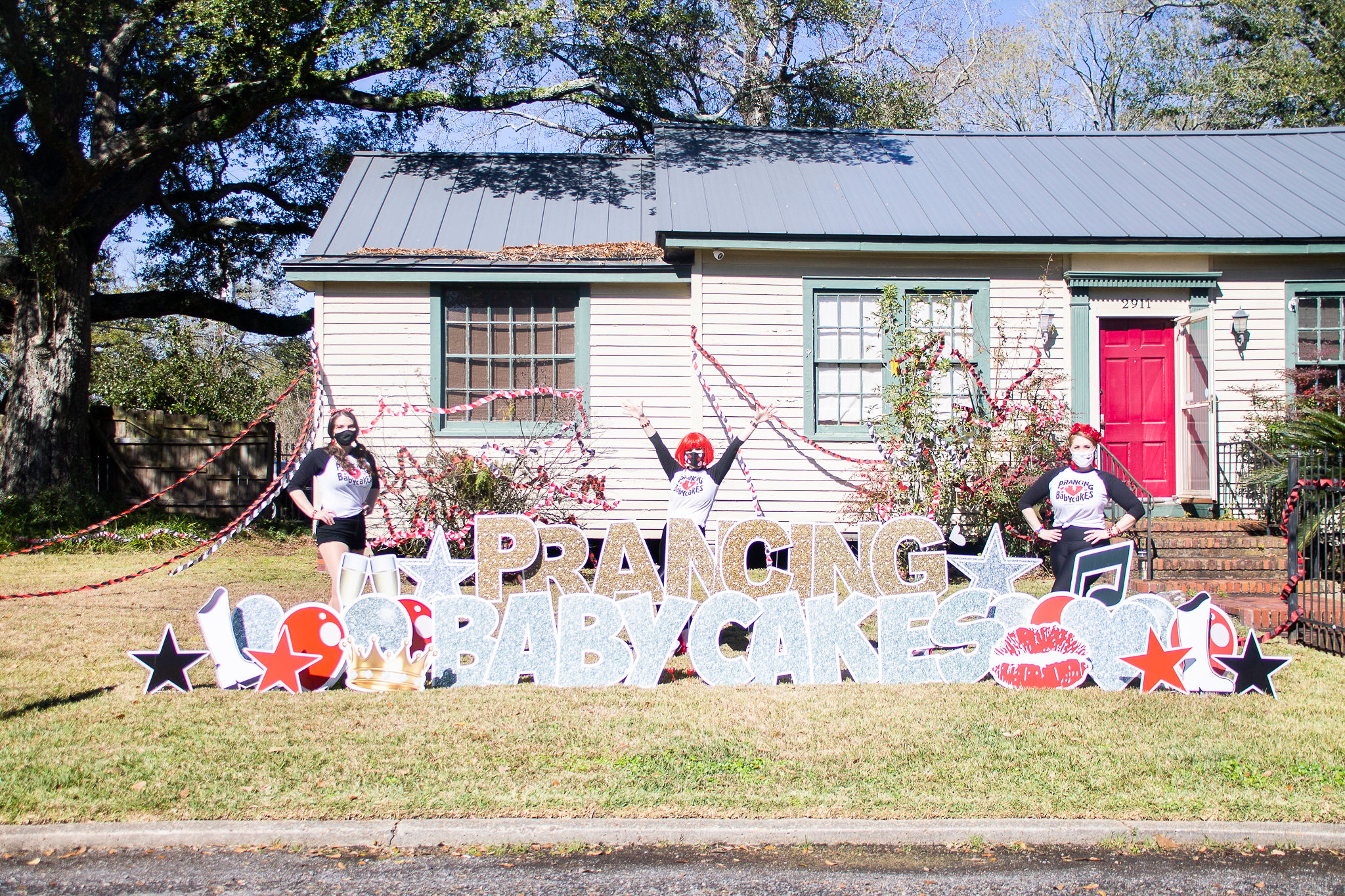 “We were so excited to do something for Mardi Gras, even though it’s not our usual dancing in the parades. We had to show out and flex our creative spirit. A lot of kids are really excited.”

—Jessa Mayard of the Prancing Babycakes. Mayard and the rest of the dance troupe decorated her house with a Valentine’s Day theme, including handmade streamers, pink hula hoops and buckets with long handles to hand out candy in order to stay socially distanced. 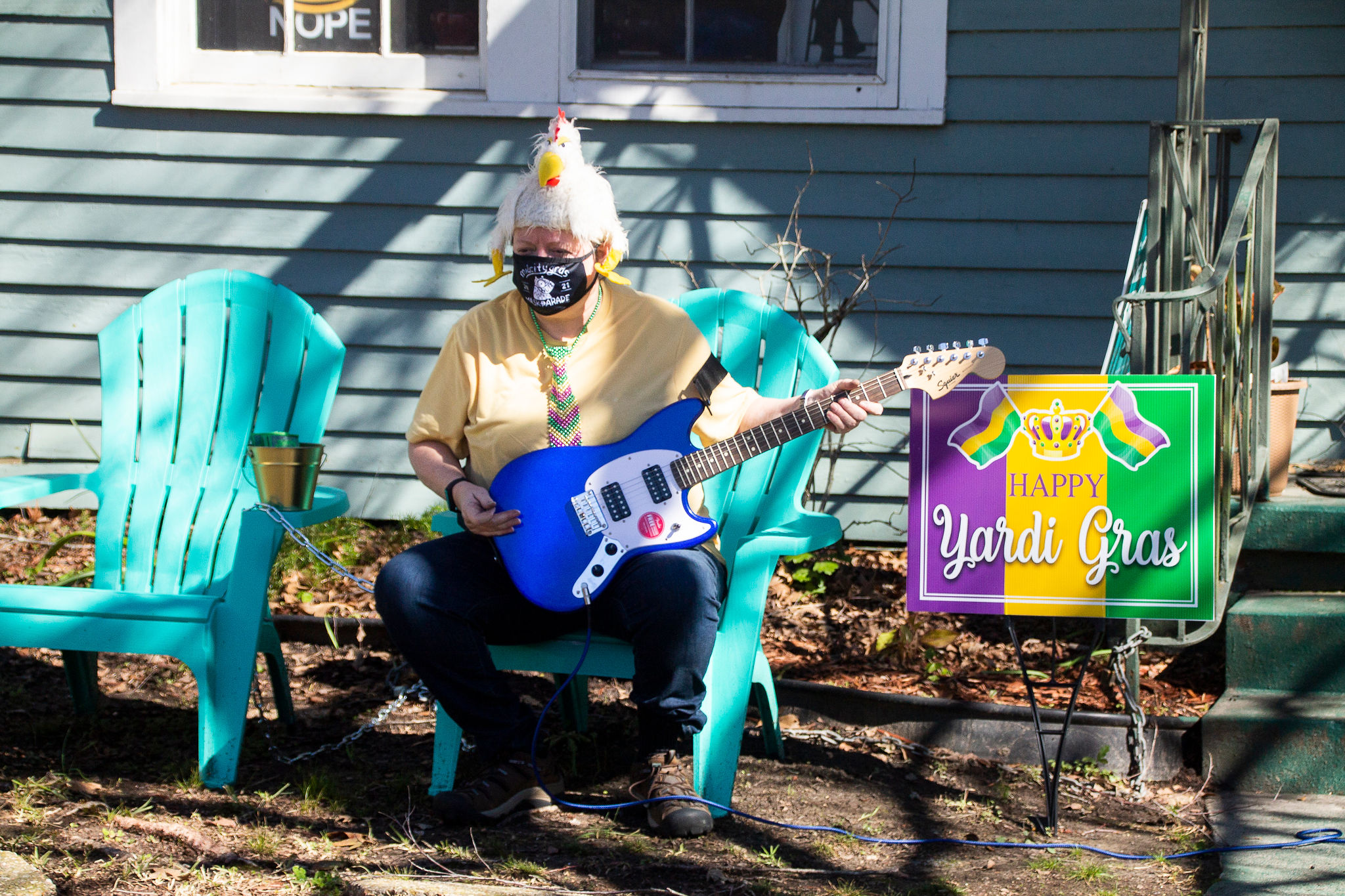 “The pandemic is the worst. But one of the good things was that I got to name a Mardi Gras event after my cat. … We have to make the best of a bad situation, and this is just plain fun.”

—Marsanne Golsby, whose house theme was Sparkle Bling Bling. Golsby is one of the founders of Mid City Gras. Named after her cat Sparkle Bling Bling, Golsby was a one-woman show on Sunday at her Mid City home, where she’s hosted parties during past, pre-COVID Mid City Gras parades. She also played her new blue Fender guitar for revelers in passing cars, one whom included Mayor Sharon Weston Broome. 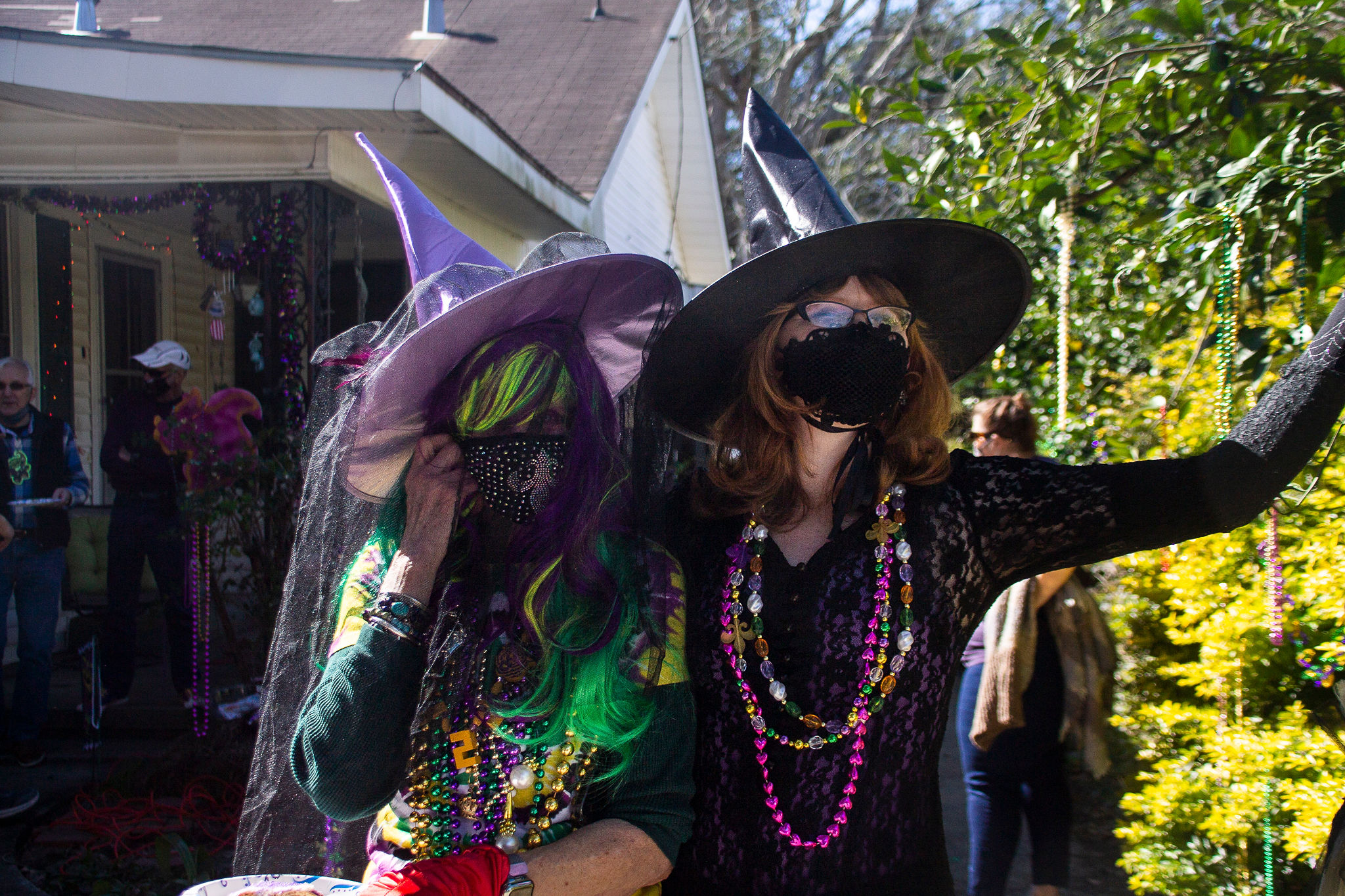 “This is our first year doing this. We love Mardi Gras, and we just wanted to have fun and dance. So we decorated. Since the pandemic, this is one of the only ways we could get the neighbors together and have fun.”

—Charlie Chavez and Christina Armistead, whose house theme was the Witches of Ogden Park. Usually the witches only come out for Halloween, but Chavez and her krewe made an exception this year. 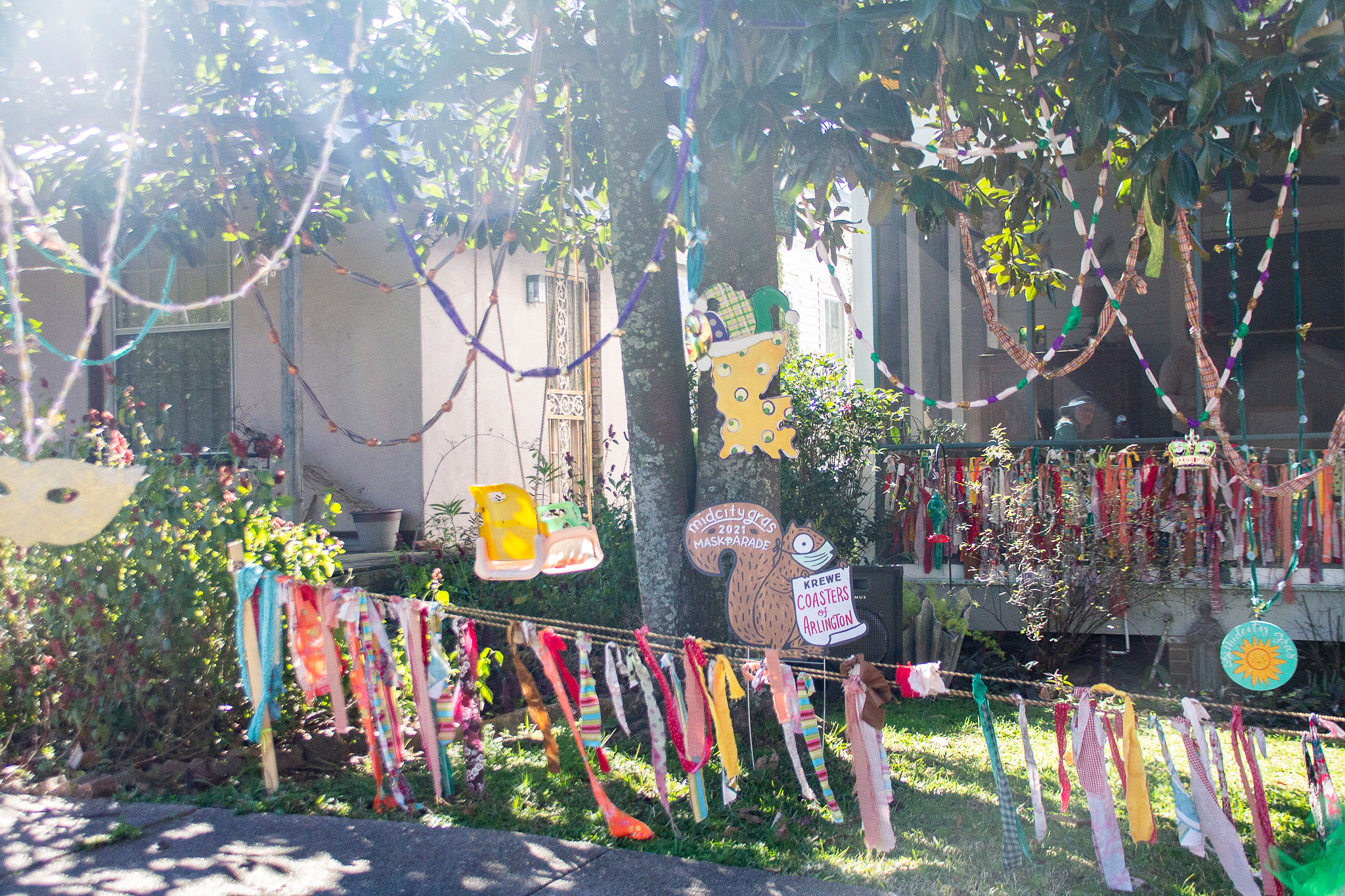 “We wanted to keep the spirit alive. We’ve been very crafty critters making these decorations. Seeing all the people coming by has been so much fun. It’s the best turnout we could have hoped for.”

—John Blanchard and Christy Papa, whose theme was Coasters of Arlington. The Mid City Coasters krewe has been a part of Mid City Gras since it began. This year, the krewe set up across a few different members’ houses for this year’s unique festivities. 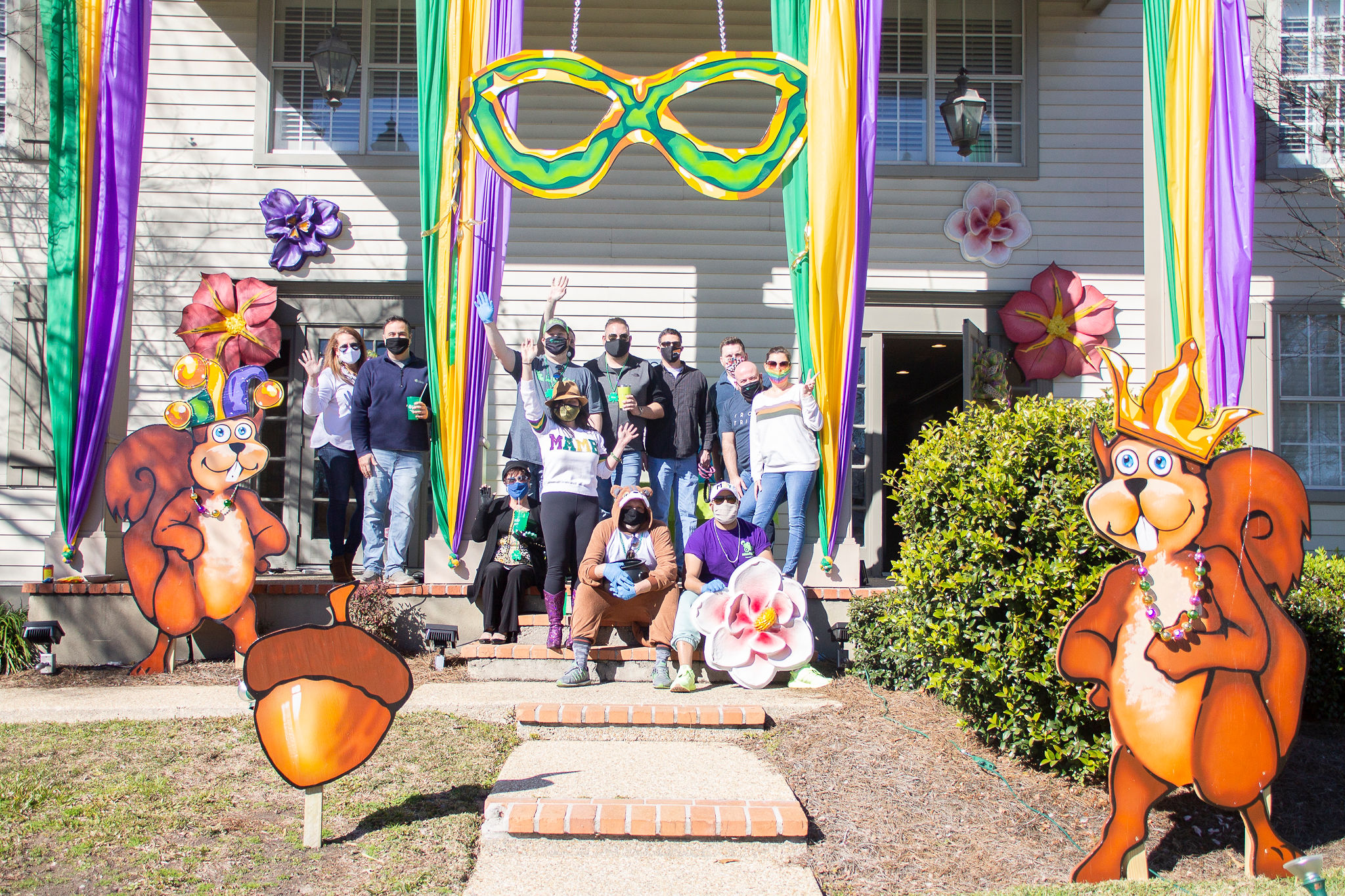 “We just wanted to be a part of something. There are so many people stuck at home, and this is their way of coming out and doing something different. I wasn’t sure how many people would be out and about, but we’ve gotten a great reception.”

—Robert Lucky, of Lucky Law Firm, and friends. Lucky Law Firm usually has a float in the parades, but this year, it contacted an artist from Blaine Kern’s studios in New Orleans to construct flowers, a mask, and squirrel decorations for a front yard display. 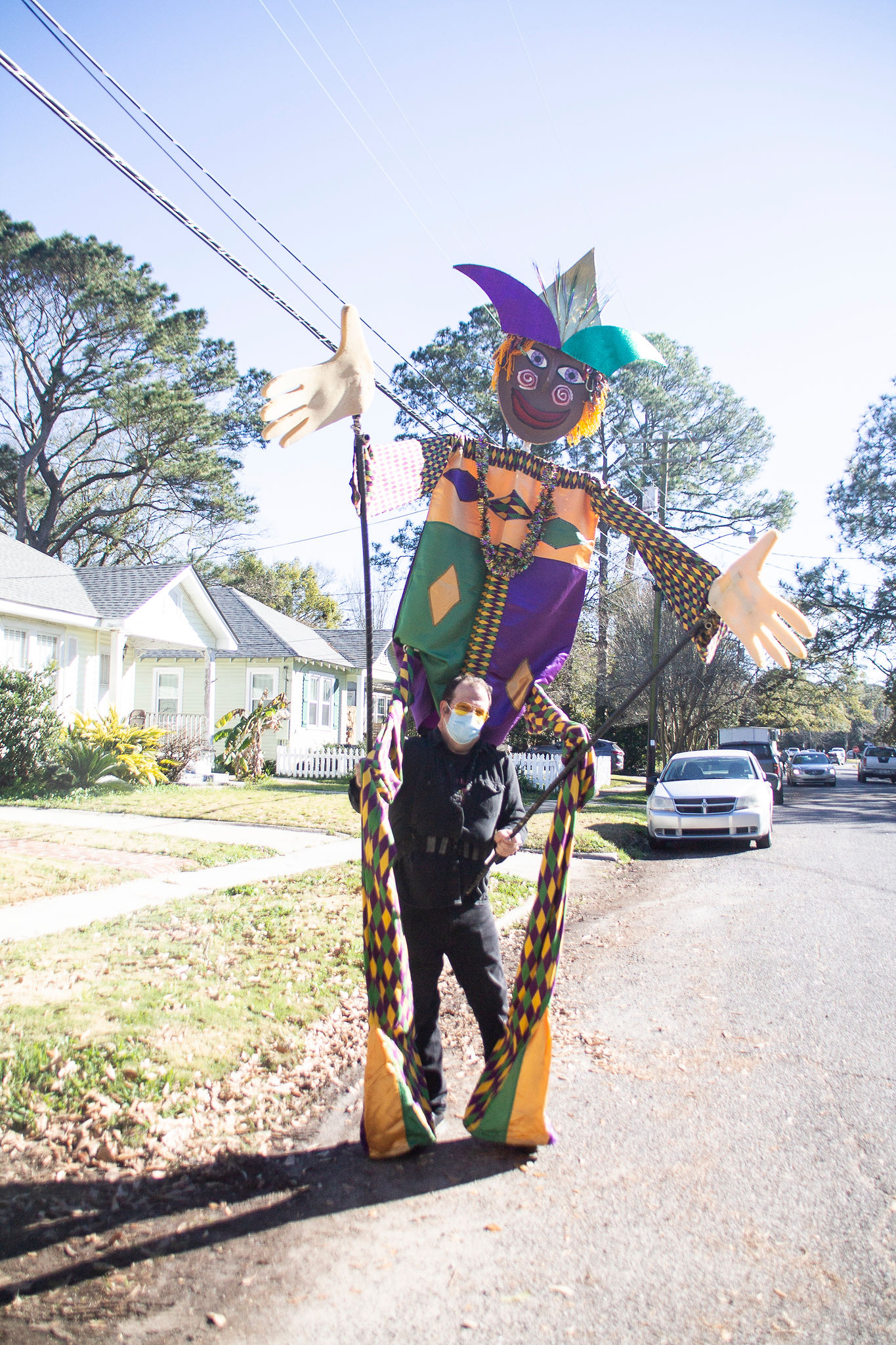 “We usually do festivals and parades, and we don’t have those this year, so this was our shot to do something for Mardi Gras.” 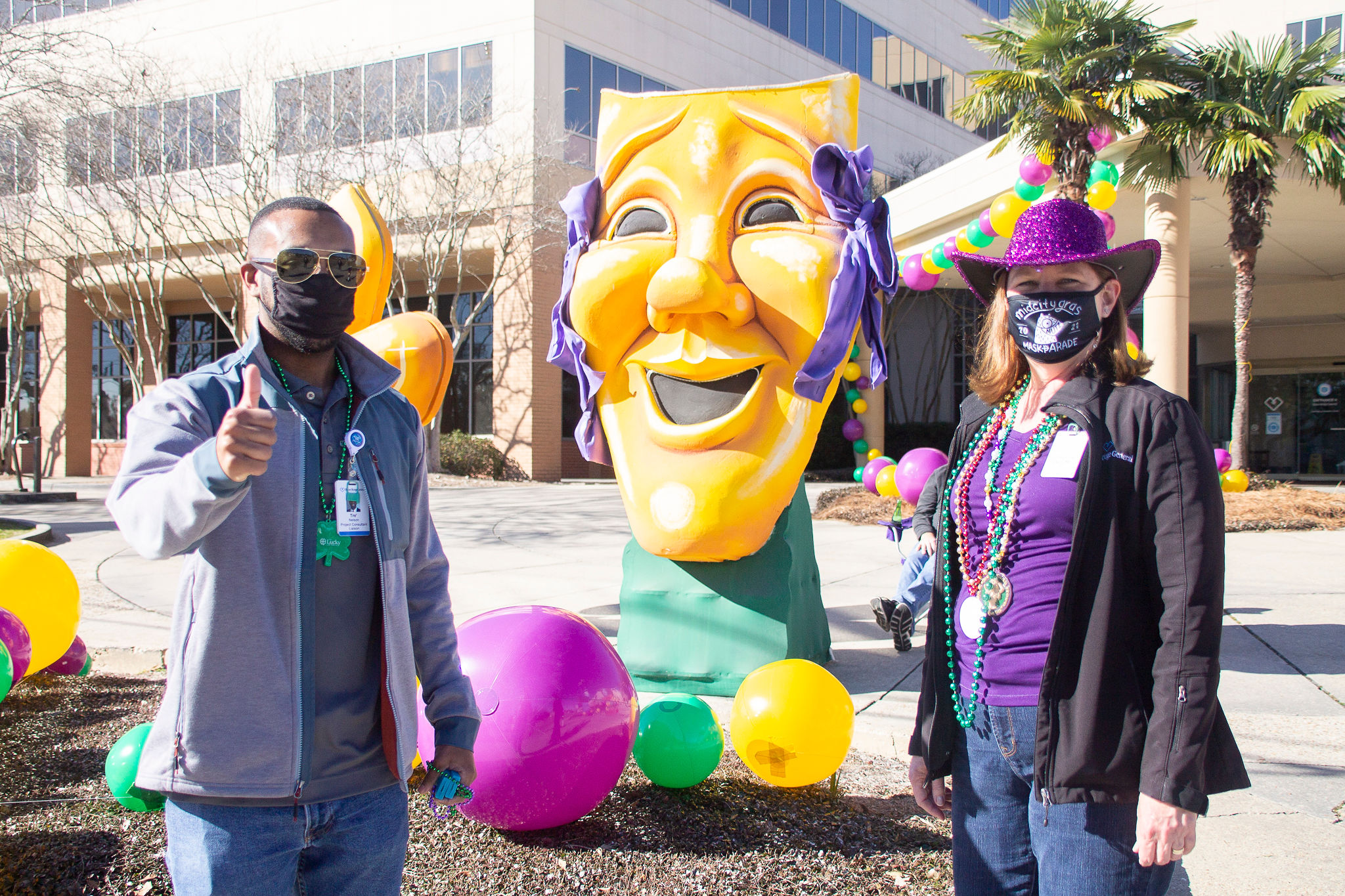 “We always want to be involved in the community. This has been absolutely wonderful, and everyone is so excited. Everyone’s getting to get out of their houses.”

—Barbara Ruiz and Trey Nelson of Baton Rouge General. The General’s Mid City campus provided throws including Band-Aids, which were very on-brand, and the hospital front was decorated with a mini float, a pelican and beach ball Mardi Gras “beads.”

[Sponsored] Beyond the gym: How to balance your wellness scales this year

You might see smart meters in downtown Baton Rouge soon