Picture this: four women over the age of 60, shredding punk rock anthems. Throw in some great hair and chocolate chip cookies, and that’s the band Your Mom. What they deliver is often unexpected, but as producer David Hinson says, you can count on two things: “Nice ladies, devil music.”

The group got together about four years ago after the ensemble local band The Grand Suburban divided into smaller acts: The Squanders, Low Water Bridge and Your Mom.

“I’ve been playing a long time,” says guitarist Kay Lindsey. “But this band, it’s an experience. It’s enjoyable. The friendship is palpable here. And it’s just a lot of fun.”

Lindsey’s the most recent addition to the group, but she’s been on the music scene for a while. She actually met Hinson in the early ’90s at an old music store on Main Street called Galaxy Music. She is the resident guitar expert, and her experience allows her to roll with the punches on stage. It’s an essential skill for a band packing some significant power.

Hearing their music for the first time feels restorative—like completing a vigorous workout, then eating the perfect homemade meatballs followed by a massage. At least, that’s how band manager Mim Aretsky describes the experience. It’s the band’s passion that grabs hold of the audience, especially that of drummer Debbie Roussel. She’s the least experienced of the bunch, but what she lacks in technique, she makes up for in enthusiasm.

“When you have ladies who are at this point in their life, they’ve got a lot of experience and a lot to say and a lot of feeling,” Hinson says. “And when you put that together with the excitement of being in your first rock and roll band, wisdom meets this rowdy kind of vandalism.” 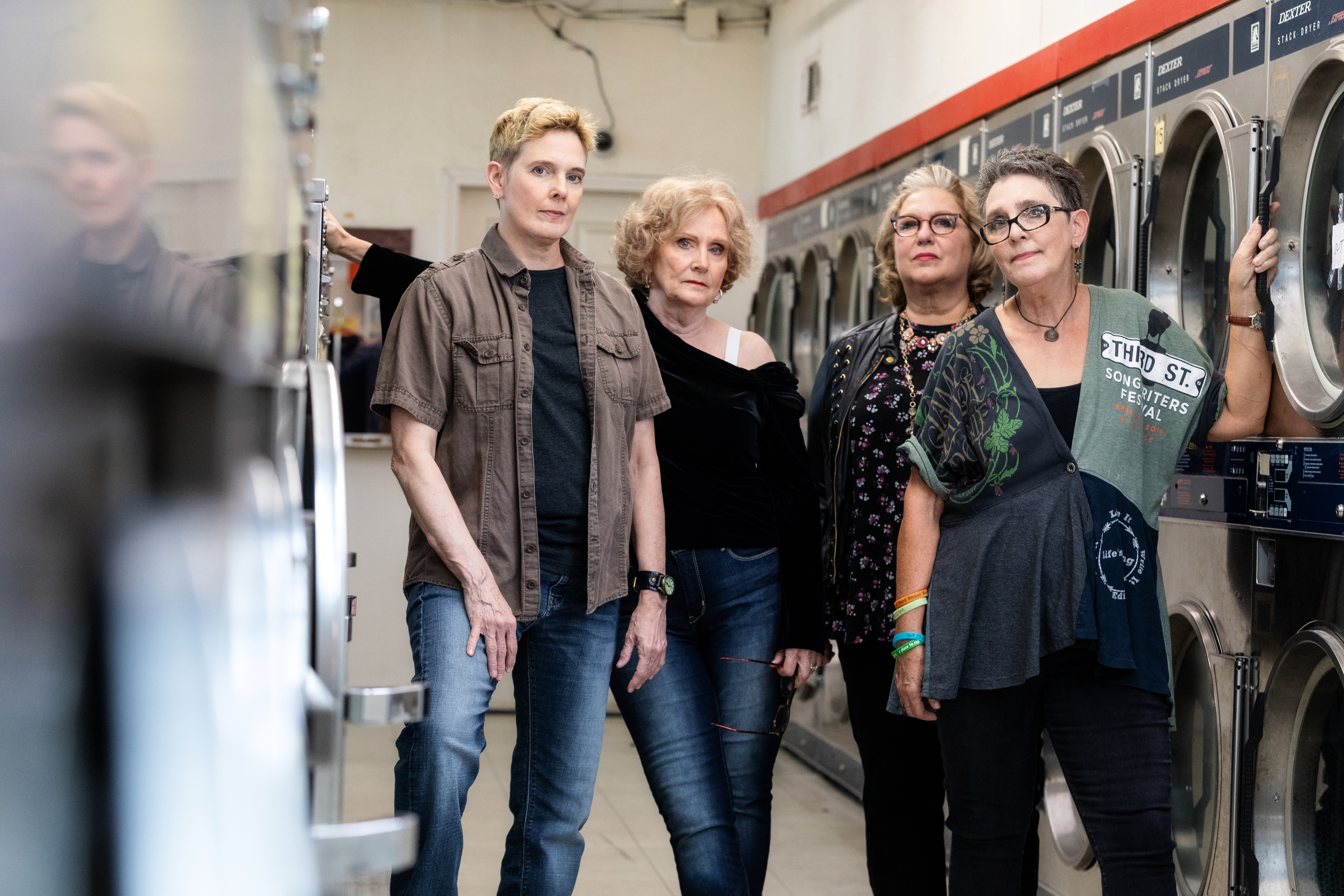 Supporters have likened Your Mom’s music to AC/DC and The Cramps, and most of their tunes carry a satirical and sarcastic edge, much like the early punk rock movement of the ’70s.

You might have experienced their sound at Mid City Ballroom, The Varsity Theatre, Phil Brady’s or the Arts Council’s Ebb and Flow Festival, with setlists that are a combination of covers and originals. Some of their most popular original tracks also seem pretty on-brand: “Aluminum Foil,” “Meg White,” “Call Your Mom,” “Tupperware Lid” and “Drugstore.”

And if anyone in the band ever forgets a lyric, they know to look at bass guitarist Dorothy LeBlanc, who says her sharp memory is her strongest asset. She’s certainly a favorite among fans. Her oatmeal chocolate chip cookies make an appearance at every show, occasionally passed around with milk-filled Dixie cups and an assurance from LeBlanc that the band “is about to melt your face off.”

“And I love playing bass,” LeBlanc says. “Man, bass is power. That thing is loud.”

LeBlanc says she considers herself a mousy person in her day-to-day life, but being a part of Your Mom has emboldened her. “This is the most courageous thing that I have ever done in my whole life,” she says. “And I walk a little bit steadier and taller because I know I can do this.”

The foursome wouldn’t be complete without rhythm guitarist Sandy Brock. She brings the humor and sarcasm to the group, plus some killer pipes. “I sing, but I’m not a singer,” Brock says. “I mostly yell and growl.”

And there’s another member the band occasionally welcomes to the stage. Her name is Candy Cigarette, but she’s really Hinson dressed in “foxy grandma attire.” Hinson and his now 22-year-old daughter came up with the character, who fills in for absent band members.

While each of the women in the band brings something unique to the table, it’s the shared friendship, passion and willingness to try new things that keeps them coming back.

“This sounds really dramatic, but it has totally changed my life,” Roussel says. “It just helped me open up and connect with a part of me that I needed to open up a long time ago.”

For now, the band’s goal is to play with other local and traveling musicians to hopefully ignite some gig swapping. Your Mom recently played with other groups like Baby in the ’90s at a house show ahead of Warfare, a two-day, hard rock music fest in the city. This goes down in all their books as a top night, especially Roussel’s, who credits it as the first time she ever felt like a rock star.

And until they hit it big, Your Mom will continue to bust stereotypes.

“I hope we’re an inspiration to women of age that think maybe they can’t do something,” Roussel says. “But you know, you can. You might not be perfect at it, but just keep trying. And as long as it brings us joy or you joy, that’s what it’s all about.” Find Your Mom band on Facebook.

The band took to Facebook ahead of this story and asked fans for questions about anything from kitchen tips to music favorites. Here’s how the band answered:

What is the best type of aluminum foil? Reynolds Wrap

What is singer and guitarist Sandy Brock’s hairspray of choice? Not applicable—frizz doesn’t move. “We tried using hairspray as a stage prop one time, but then we learned hairspray makes your guitar strings really sticky,” Hinson says.

Do you have any tattoos? Yes, some of the ladies do have tattoos. But when it comes to who, what and where, their lips are sealed.

If you could open for any band, who would it be? The Rolling Stones

Has anybody been arrested? No, we’re not those kind of girls.

Where does Candy Cigarette get her glasses? Flea market on Florida Boulevard

Do you have any groupies? Stalkers? Cookie lovers? Brock’s husband, Ed Brock. But also an action team of family and friends that doubles as personal bodyguards and equipment wranglers.

Where does drummer Debbie Roussel buy her lipstick? Sephora

What’s the most punk rock thing that’s happened at one of your shows? Young people fist pumping with half-eaten oatmeal chocolate chip cookies in their hands at the Warfare pre-party.

Heat oven to 375 degrees. Cream the margarine and oil. Add the sugars and blend thoroughly. Add the eggs and vanilla, blending well. Fold in the flour, baking powder, baking soda and salt. Fold in the oatmeal and chocolate chips. Spray a baking sheet with non-stick cooking spray. (LeBlanc uses a cookie scoop to place dough on the baking sheet.) Bake for 8-10 minutes.