When he thinks about what Southern University has meant to him personally, retiring president-chancellor Ray Belton responds with quiet candor.

“Southern,” he says, pausing, and taking in a breath. “Southern has meant everything to me.”

Belton’s palpable affinity for the institution goes back a long way. While a strong student in high school, the Shreveport native didn’t consider going to college, choosing instead to enlist in the United States Army like his father. In his late 20s, after completing his military commitment and working full time for local industry, Belton figured he’d use GI Bill benefits to take a few classes at Southern University Shreveport, then a two-year institution.

Right away, his professors saw potential, and made a point of encouraging him.

“The faculty really reached out to me,” Belton says. “They saw something in me.” 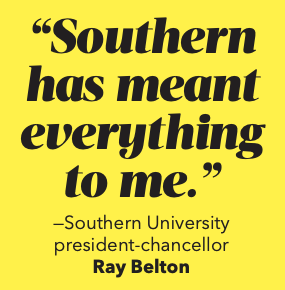 Belton transferred to Southern’s flagship campus in Baton Rouge to complete a bachelor’s degree in psychology, and began a career as a licensed mental health counselor, working in Louisiana and in Boston. He later earned a master’s degree from the University of Nebraska at Omaha.

While working in Nebraska, Belton’s father died, leading him to return to Shreveport to take care of his mother. There, he was asked to teach classes in psychology at Southern’s Shreveport campus.

Belton showed natural skills as a teacher and campus leader, and faculty mentors encouraged him to shift his focus to higher education administration. They suggested he apply to the University of Texas at Austin’s competitive doctoral program in educational administration. He was accepted, and after completing his PhD, Belton returned to Southern University Shreveport. There, he served in several administrative roles before becoming chancellor in 2003. Over the course of Belton’s 12-year tenure, the campus saw $34 million in capital improvements and a 156% increase in enrollment.

Calm, thoughtful and driven to see students flourish, Belton has been a steady hand at Southern, guiding the university out of unprecedented challenges, including dips in enrollment, budget shortfalls and probation for 12 of its athletics programs, and onto solid, exciting ground. He’ll be succeeded by incoming president-chancellor Dennis Shields this fall.

We checked in with Belton about some of his best memories as leader of the Jaguar Nation, and what he sees for the system’s future.

As you look back on your tenure as president-chancellor of Southern, what are you proudest of?

A number of things. When I first arrived (in 2015), it was on the heels of a period of significant disinvestment in higher education, and Southern University Baton Rouge was tremendously challenged from a fiscal standpoint. I’m really pleased we were able to bring fiscal stability to the campus. Also, the university had never had a strategic plan, and we did that. It’s provided us guidance and direction, and brought every department together toward a common goal. Also, this year, we are enjoying the largest enrollment at Southern University Baton Rouge we’ve seen since 2010 (7,404 students). And our enrollment projections for next year are 30% higher than this year.

Your undergraduate major was in psychology, and you worked for many years as a mental health counselor before becoming a tenured psychology professor. Why did you gravitate toward this field?

I’ve always been inquisitive about people, and the importance of understanding others and understanding yourself. My professors really imposed upon me to think about my worldview. For most of my life, I’ve had a yearning to understand human behavior, which is why I became a counselor and worked in clinical settings. Once I got into the classroom and into administration, it was clear there were a lot of similarities. It’s so rewarding to see students come in at one level and leave at another. I really enjoy watching them progress in their development. I think that’s something Southern does very well, caring about each student’s growth.

Under your leadership, the university has experienced many infrastructure improvements and created a master plan for the future. Tell us about this.

This year, we’re celebrating our 142nd anniversary, which is great, but it also means we have some aging facilities. It was important to us to identify our needs, and ensure we’re able to welcome new generations of students in the future. We asked ourselves: ‘What kind of infrastructure do we need to ensure that, going forward, we can attract 20,000 students?’ We’ve worked with the Baton Rouge Area Foundation and the Center for Planning Excellence to create a plan for the future that will position us to be able to do this. It allows us to grow our signature programs, like our College of Nursing, build a new student union and honors dorms. We’re well on our way to constructing a new STEM facility, a new College of Business and other amenities that will create a great student experience.

It sounds like the plan has energized alumni already. Isn’t fundraising at an all-time high?

Yes. We’re launching a capital campaign next year for the first time in the history of the university, and already we’ve been able to attract donations in the millions. Alums are really responding.

Under your leadership, Southern became one of just two institutions in Louisiana to be awarded a license to grow medical marijuana. What has that meant for the university?

It has really taken off. We have about 16 to18 different products now, and demand for these products is higher than ever. We’re engaging in research and trying to learn as much as we can about their therapeutic value. It’s been both a revenue generator for the university, and a way to ensure affordable products get into the hands of people who need them.

What are you most looking forward to in retirement?

I’m really excited about being able to spend more time with my wife, Norma, and our children and grandchildren. And I’m also excited about having time to pursue some other opportunities, like consulting.

Editor’s note: This interview has been edited for brevity and clarity.