Take a drive through Southern University’s campus today, and you’ll see a lot of construction. There are new sports facilities being built around A.W. Mumford Stadium and renovations to existing buildings. There’s a new Center for Innovation and Entrepreneurship in the works right next to the Valdry Center for Philanthropy, which itself opened in 2019.

And with this flurry of construction activity comes a need for the university to still look like a cohesive campus.

Southern released a sweeping campus master plan last fall. It’s a blueprint for a future version of the historically Black college and university, with a more pedestrian-friendly landscape; a new student union and student housing; a riverfront bluff promenade to rival downtown’s riverfront; and plenty of other improvements.

The university partnered with the Center for Planning Excellence on the project, launching a two-year deep dive into how the physical campus might grow, how it might welcome visitors and how students might get from class to class.

“When we engaged with CPEX on this, we had already started some of this work and needed a way to pull it all together,” says Southern University Foundation CEO Alfred E. Harrell III. “We needed to make sure that what we do fits into our comprehensive strategic plan.”

That broader plan for the university might be less visible than the campus upgrades, but it’s just as important. Southern aims to up enrollment to 20,000 by 2030.(For context, it welcomed about 7,500 for the fall 2021 semester.) Harrell says this much larger student population would be half traditional, in-person students and half online students.

And to attract those new students, the look of the campus and having top-of-the-line facilities are paramount.

“Thirty years ago, a young African American student would look to HBCUs first, because those were schools they felt spoke to their experience, or that was where their parents went,” Harrell says. Now, he adds, access to information and more mobility has expanded their search to consider an HBCU’s rankings, its facilities and the overall experience on campus compared to other universities.

For CPEX’s part, much of its work has focused on a facelift to the campus and connecting it to the Scotlandville community. That includes streetscape improvements along Scenic Highway, a new gateway entrance at Scenic and Harding Boulevard, and beautification of the secondary entrance on Swan Avenue. The new student union will be located in an area more accessible to the nearby community, and a new alumni center will offer event space and sweeping views of the Mississippi River.

“This is an area of the city that’s been disinvested in over the years,” says Camille Manning-Broome, CPEX’s president and CEO. “It was wonderful for Southern to take a leadership role to say, ‘we want to lift up the entire community.’”

In CPEX’s discussions with students and faculty, many spoke of the need for places to eat just outside campus.

“It is a food desert, and the students and faculty told us they need somewhere to access fresh food,” says CPEX community planner Lyneisha Jackson. “There’s a Family Dollar (right outside the campus entrance) and not much else.”

Southern owns some parcels of land near campus on Scenic Highway that it could redevelop for much-needed fresh food markets. There’s also a stretch of Swan Avenue that currently plays host to pop-up food trucks serving the campus population—it could be redeveloped for a pedestrian-oriented district of cafes and walk-up restaurants. Scotlandville Plaza has already become a space for community activity, with the weekend Scotland Saturdays market and the Southern Cofe coffee shop across the street.

Harrell says the community outreach should go even further than gathering spaces. Part of the university’s strategic plan focuses on bringing its resources and education into Scotlandville and north Baton Rouge. Its highly ranked College of Nursing and Allied Health could provide urgent care services to nearby residents while also training students. Southern’s AgCenter could take a more active role in solving the food desert issue in this part of the city, as well.

“Universities have a tendency to be insular—everything they do from research to programming tends to stay on campus,” Harrell says. “We understand the overall mission is to educate students, but ultimately the best use of that education and research is to activate it within the community. It gives us an opportunity to practice what we teach right here.”

Southern will officially launch its capital campaign this summer with a goal of raising $760 million over the next five years to achieve its strategic plan. Many of the major construction projects, such as the new student union, are expected to break ground later this year. subr.edu and cpex.org 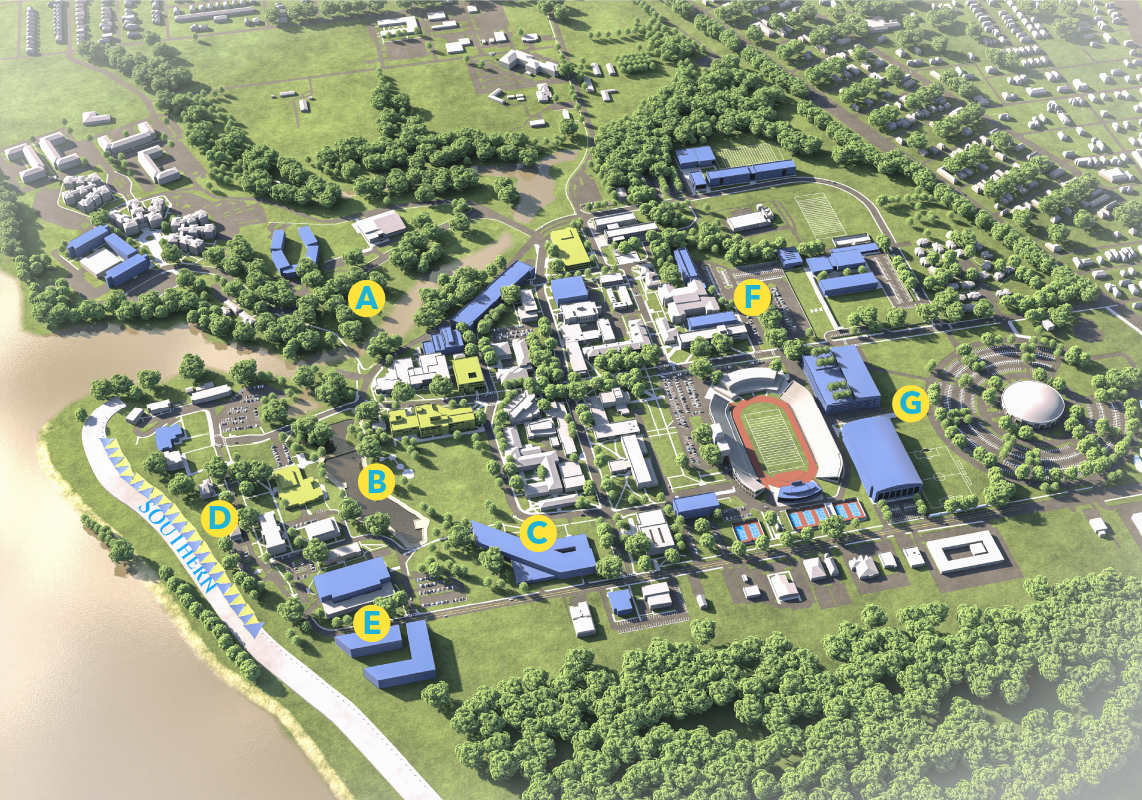 Some highlights from the master plan Southern developed with the help of Center for Planning Excellence. Buildings in blue in the rendering are proposed new construction projects; buildings in green are renovations. Find out more at suscotlandvilleplan.com.

A. Pedestrian access: Better lighting and a new pedestrian bridge will make it safer for students who live in the cluster of on-campus housing complexes to get to class.

B. Lake Kernan: Boardwalks and other improvements on the lake will create a serene and natural gathering place.

C. Student Union: A new $70 million structure will replace the Smith-Brown Memorial Student Union, which will eventually be demolished for a quad and green space.

D. Riverfront bluffs: The views of the Mississippi River from the bluffs will be upgraded with canopies, historical markers and branded lettering. Reinforced concrete steps will also prevent erosion.

E. Alumni Center: Located near the famed “Red Stick” sculpture, this will provide event space with views of the river.

F. College of Nursing and Allied Health: The sought-after nursing program regularly gets more applicants than it can accommodate. The master plan includes a 59,000-square-foot addition.

G. Athletics facilities: Southern athletes would gain a 100,000-square-foot indoor athletics facility, and visitors would be able to use a 2,000-car parking garage on game day.