Since the mid-’90s, millions of dollars have been invested in downtown Baton Rouge, transforming the once sleepy district into a lively hub for arts and entertainment, dining, events and everyday life.

Just in the last two years, the Cary Saurage Community Arts Center opened, along with the renovated River Center Performing Arts Theatre, the new River Center Branch of the East Baton Rouge Public Library and the first units in the anticipated Residences at Rivermark, an upscale development in the former Chase skyscraper.

But there’s plenty to be done, says Whitney Hoffman Sayal, recently appointed executive director of the Downtown Development District. Sayal is just the second person to lead the organization since its 1987 founding. She fills the role long held by Davis Rhorer, who died in 2021 from complications of COVID-19.

A Nebraska native, Sayal earned a bachelor’s degree in architecture from Louisiana Tech and a master’s degree in landscape architecture from LSU before embarking on a career in urban planning that included an eight-year stint working at the DDD. She left the three-person organization in 2020 to advance her career at BREC on its urban trails program.

After Rhorer’s untimely death, Sayal wanted to resume her mentor’s work. She competed in a national search for the executive director spot.

225 checked in with Sayal about her vision for downtown, the new parking meters we’re seeing on its streets, and her most interesting—and surprising—past job.

Answers have been edited for clarity and brevity. 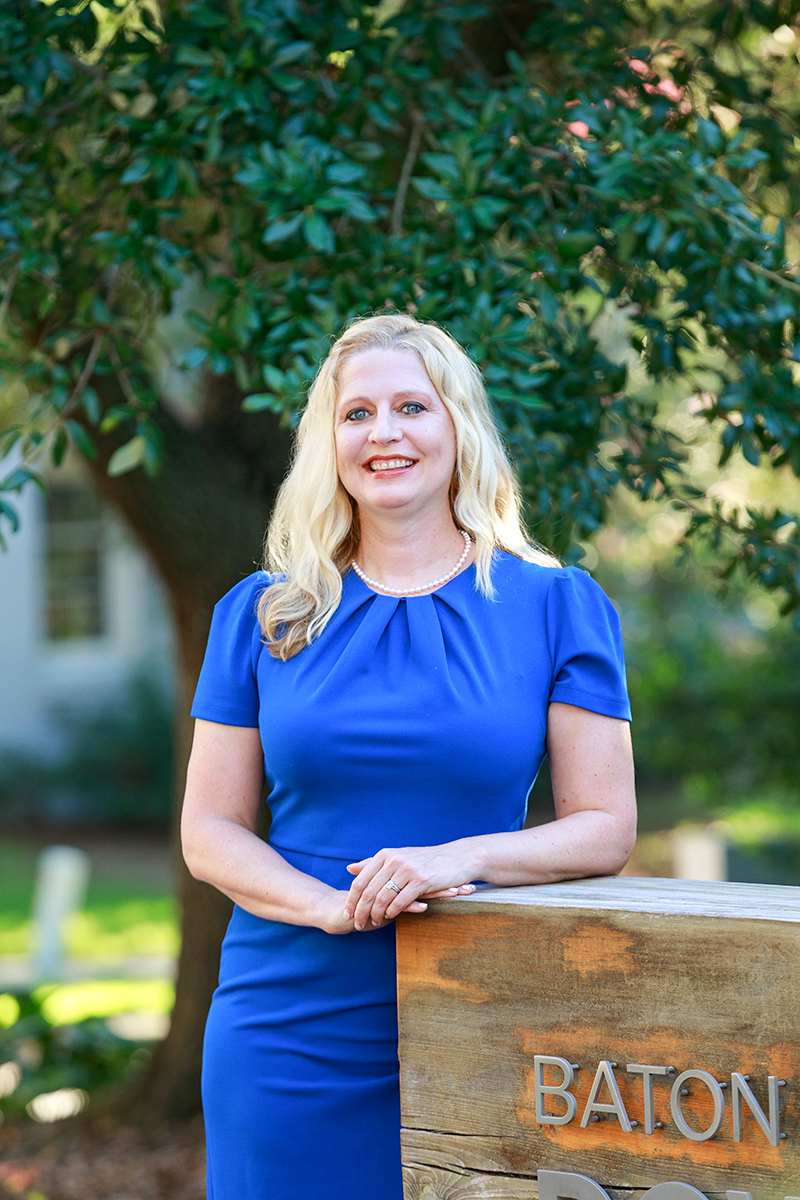 It’s been almost 20 years since Baton Rouge began its downtown revitalization. How are we measuring up?

In terms of Plan Baton Rouge II (the most recent downtown master plan), there are a few things left, but we’re mostly complete. I think we really need to spend some time celebrating the success of that, because plans are notoriously known for staying on a shelf. But with this one, we did not do that. And it really took a lot of stakeholders coming together in support of that plan to be where we are today. Still to be done is looking more at Downtown East, the area east of the interstate to the railroad tracks. We have expanded our boundary to include it, but it hasn’t really been looked at carefully. Also, I think going forward, we’ll focus a lot on the connections between downtown and the rest of our community.

What is your vision for downtown?

The basic vision never changes: to make it a space where people can live, work and play 24 hours a day, seven days a week. I don’t know that we’re there quite yet, but it continues to improve. We will be doing a strategic plan with our stakeholders, but in my job interview, I talked about six strategic points. One was rebranding downtown, because we’re kind of entering a new era. Another was building an authentic inclusive culture through effective engagement, and another was fostering a diverse business community and economy. We might also look into a “clean and safe” program, which other downtowns have, where you have people dressed in uniform trained to welcome visitors, provide directions, provide litter pick up and basic maintenance and other services like basic security. I think it would be a huge value to downtown.

Creating more residential opportunities has been a priority for several years now. What’s happening with housing?

It’s funny. When I applied for my previous position here in 2012, I was asked to write what I felt downtown was missing, and my two responses were ‘a grocery store and a pharmacy,’ because that’s what was needed to bring residents and really make downtown a 24/7 active community. Now we have those. And between them and the rehabilitation tax credits for historic buildings, it’s given us the ability to bring more residential units into the heart of the Central Business District. Now you see the Residences at Rivermark. That’s going to be huge. You’ve got The Heron (luxury apartment building), as well. It’s just becoming a place for residential life. We’re seeing more families. We’re seeing empty nesters. We’re seeing young professionals. We have a lot of infill opportunities for more housing, especially when you look at Downtown East.

A perennial complaint about downtown is having to pay for parking. What do you think when you hear that?

I think when you go to pretty much any city’s downtown, you expect to pay for parking. People from Baton Rouge will go to New Orleans and expect to pay for parking and to walk a little to their destination, right? For some reason, when it comes to Baton Rouge, everyone still wants to be able to pull up in front of a business downtown. But that’s been almost impossible because we haven’t had the turnover parking, where people are parking, taking care of business, then leaving. They’ll stay in one spot all day, especially with so many broken meters.

You announced in August that a new parking system is being installed this fall, and will replace meters. This is supposed to help with turnover parking, right?

Yes, we’ll have a functioning parking system, so it’ll be easier for law enforcement to monitor meters. People will use them to conduct their business, then move on. The new meters work with an app and a credit card, but you can still use coins. There will be kiosks on each block, so it won’t be as cluttery either. It’s going to create the turnover parking that our businesses need to survive.

What additional amenities would you like to see in downtown?

We’re going to have the Bus Rapid Transit line come through downtown from north Baton Rouge to LSU, which will be important, and which we very heavily advocated for. I’d also like to see more public art. We were blessed with the (reflective) Rotary sculpture, ‘Sing the River,’ (on the riverfront), and that’s been huge. I think that beautifying our streetscapes is going to be really important. We also have an aging infrastructure. A lot of cities struggle with that, but infrastructure projects will help catalyze continued private development.

What would you recommend a downtown visitor experience?

I think our museum and attractions are great and can keep you busy for a day or all weekend. Come stay in a hotel and really absorb the experience. I think our Downtown Greenway (bike path) is fabulous, going from North Boulevard and then connecting on TJ Jemison Boulevard. The ‘Sing the River’ sculpture. I love Third Street. It’s so lively, and you’ve got so much going on.

Tell us something that very few people know about you?

I was an ocean lifeguard in the summers after high school in Myrtle Beach, South Carolina. That was probably one of the coolest experiences I’ve ever had. People don’t really know this, but folks come from all over the world to ocean-lifeguard. I had friends from Costa Rica, France and Russia. It was a lot of fun.