Many fans of the Perkins Road Overpass District would agree the area succeeds notwithstanding some pretty challenging design conditions.

Bars, restaurants and retailers—most of them locally owned—pulse with activity despite a harsh concrete backdrop, noise from two overhead roadways (Perkins Road and Interstate 10) and cramped, poorly marked, gravel parking. The area is also void of landscaping and is flanked by overgrown, undeveloped patches on its northwest side.

For years, business owners, particularly in the Perkins Road underpass portion of the district, have mused how the area has the bones to become a model mixed-use destination—if only the city of Baton Rouge would invest in improvements. Now that idea is closer than ever to reality, though bureaucratic hurdles still remain. 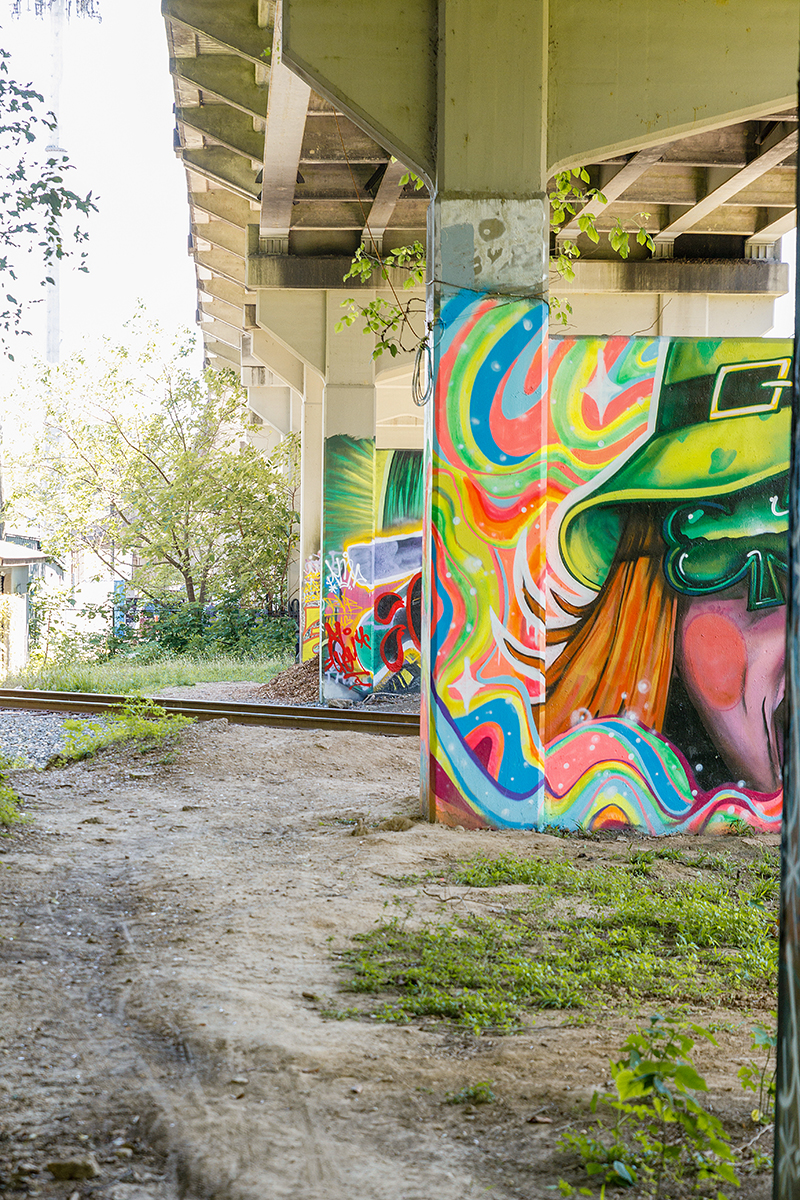 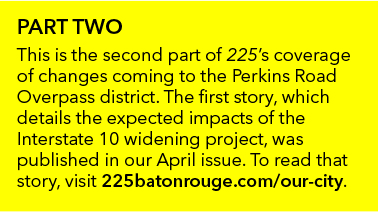 In March, a handful of can-do business owners released the first renderings of a landscape plan to revitalize the underpass area. The targeted strip runs in front of businesses like Kalurah Street Grill, Salon Hue and BLDG 5, extending from Reymond Avenue under the overpass at one end, to Christian Street on the other.

BLDG 5 owners Brumby and Misti Broussard; Varsity Sports owner Jenni Peters; Moreau Physical Therapy owner Al Moreau; and Chad Hughes, owner of Ivar’s Sports Bar & Grill and the forthcoming Unleaded BBQ, paid for the plan themselves (along with an initial survey of the area) as a way to jumpstart the work. The group raised $40,000 to do so.

“We’ve been working on this idea for two years,” Peters says. “The city-parish told us we needed a survey and a plan to get things started, so we chipped in and paid for them ourselves.”

The group contracted with Baton Rouge-based Carbo Landscape Architecture to create the plan, released in mid-March at a press conference at BLDG 5. The design would transform the area, improving current conditions with a safe, multi-use path that encourages pedestrian and bike activity. Sources of funding are still to be determined for the
$2.2 million project, though any public funding would likely come from an enhancement fund within MOVEBR, the city’s transportation initiative.

The underpass plan’s main objective is to create better connectivity and safer pedestrian conditions in the popular area. Currently, walkers and bikers are loath to access its amenities by way of the Perkins Road Overpass, with its narrow sidewalks and fast-moving traffic.

A safer alternative, the plan proposes, would be allowing users to arrive by way of a new, ADA-compliant Merchant District Trail under the overpass. It would start at Reymond Avenue, flow along Kalurah Street under Perkins Road, and end at Christian Street. New landscaping, lighting and public art would soften the area’s concrete vibe, making for a pleasurable, inviting environment. 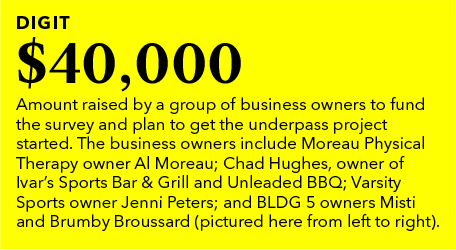 Parking in the area is notoriously bad, with cramped diagonal spaces in front of underpass businesses creating traffic jams as motorists arrive and depart. The plan calls for better organized parking, plus drop-off areas that could inspire carpooling and ridesharing. While parking is limited, the plan does not call for additional spaces.

The proposed trail features lighting, murals, low-maintenance landscaping, seating and signage. It could spark additional investment in the area, organizers say, and it will connect to improvements that are woven into the interstate widening project happening a short distance away. Those include improved parking in the gravel lots that lie under I-10, as well as a new linear park that extends westward from the current Perkins Road off ramp (set to be eliminated).

The Perkins Road Underpass improvements could also connect to the forthcoming LSU Lakes improvements by way of East Lakeshore Drive.

The business owners released the three-phase plan to the public in hopes of gaining momentum, they say, especially now that the adjacent project to widen Interstate 10 is on an accelerated schedule. Though the underpass project is independent from the interstate project, the widening brings challenges to the entire district.

Work is set to begin on the first phase of the widening project in February 2023, after which the current parking spaces under the interstate (just southeast of the underpass) will be reduced to accommodate heavy equipment.

“I want to commend these business leaders, citizen activists, for taking this on,” Carbo said at the press conference. “This district is of cultural and entertainment significance to Baton Rouge. If you come here on a Saturday, you’d be amazed at the number of people.”

“We’ve got to begin to prioritize quality of life initiatives,” he said. “(These) initiatives seem to take the backseat, and then we wonder why we’re behind other communities and why our children want to go live in other places.”

That might be easier said than done. While an initial plan for the Perkins Road Underpass project has been completed, work can’t begin until a few more boxes are checked, says EBR Director of Transportation and Drainage Fred Raiford.

One of the biggest is gaining permission from the Kansas City Southern Railway Company (KCS) to create the portion of the trail that crosses the railroad tracks near Reymond Avenue (in the area behind BLDG 5). Raiford says that a second, more detailed survey of the area will need to be completed before the proposal can be submitted to KCS for permission to proceed and add a crossing.

Raiford, who has been meeting with organizers from the beginning, estimates that adding the new railroad crossing alone will cost between $750,000 to $800,000.

“It’s really some of the most important infrastructure you can put in place,” Raiford said at the press conference. “The mayor (Sharon Weston Broome) is fanatic about being healthy and connecting residential to commercial or vice versa.”

Exactly how the project will be funded remains cloudy.

Hover over image to see names

“They’re going to have to submit the project to the city for any enhancement funds under the MOVEBR program,” Raiford says. “This is a good project that touches three council districts (District 10, District 7 and District 12), but council members have many requests they deal with every day.”

In late May, members of the Metro Council were given guidelines on the requirements for potential enhancement projects. The discretionary funds total $49 million, Raiford says.

Coleman and Racca both indicated their support of the project at the press conference.

“I would definitely team up to make that happen,” Coleman said later. “When I look at that project, it’s the epitome of businesses that are interested in things happening where they are, and they put their money where their mouth is.”

The group of business owners behind the project say they also believe they have the potential to raise private funds to offset the cost, once it’s clear what the city-parish will fund and what will be required to pay for the new design’s long-term maintenance. They’re partnering with the BREC Foundation to manage private donations.

One thing’s for sure, says
BLDG 5 co-owner Misti Broussard. The organizers don’t want to see a reduced version of what they’re proposing.

“We have made something very clear,” Broussard said at the March meeting. “We are not interested in a 2-foot sidewalk. That is not what we’re looking for. The idea (is) to build something that there can be a lot of pride around. We just have to get this first step started and quit talking about it.”

An underpass mood board

The project’s proposal portrays the vision for the district, including these inspirational images