As National Treasure, one of the biggest film productions to come to Baton Rouge since the pandemic, nears the end of its first season’s production in June, the future of filmmaking in Baton Rouge is bright.

The Disney reboot is merely a signal fire for the innovations coming out of the capital city’s film industry, with the next generation of filmmakers being taught on state-of-the-art technology at LSU.

Thanks to a five-year $1.25 million grant from Louisiana Economic Development’s Entertainment Division awarded in 2021, LSU’s digital media center was outfitted with a virtual production stage, utilizing the same technology from Michigan-based Fuse Technology Group that brought The Mandalorian to the small screen.

A curved wall of LED screens capable of producing three-dimensional environments, in conjunction with video game design software from Epic Games and motion capture programs, was installed at LSU in February 2022. And by the first week of the summer semester, the first class completely utilizing the technology was underway.

By the second day, professors Derick Ostrenko and Marc Aubanel were already allowing students to take on roles within their film crew, including camera operator, motion capture supervisor and video engineer. The technology is run like a professional film set, with multiple disinclines coming together to work with the technology of the future. 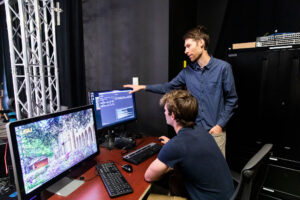 “One of the coolest things is that we are able to get students from the school of theatre, screen arts, science, digital media, engineering, music. There are just a lot of areas we are able to bring together that do a really good job at a particular skill set,” Ostrenko, a professor at the College of Art & Design, says. “We’re showing the students what’s possible and how to bridge all these technologies together and letting them make their own projects.”

Ideas are exchanged and solutions are offered in this new environment, with the set being adjusted on the fly to create a makeshift talk show set to test the screen’s capabilities.

“We’re hoping this can close the gap with what a professional production might be and what a student projection is. We’re evening that playing field,” Aubanel, the director of digital media arts & engineering at the college says. “We’re able to use the same high-resolution assets that a feature film is able to use.”

Just a 15-minute drive from the groundbreaking innovation on LSU’s campus is Celtic Studios, the central hub for almost all filmmaking in the city, bringing together the various talents necessary to sustain the industry. And with help from organizations housed there, like the Baton Rouge branch of the New Orleans Video Access Center (NOVAC), the studio helps connect those individuals to opportunities.

On the set of National Treasure, carpenters and painters transform soundstages into lost temples, while electricians maintain the electronics on screens similar to those used at LSU but on a smaller scale. The goal of a place like Celtic, the studio’s executive director Aaron Bayham explains, is to open up the industry to every kind of person—actor or  carpenter, creative or technical

“A lot of people don’t realize there are a lot of different types of opportunities to work in film,” Bayham says. “Any interest that you have can apply to the film industry. People think of actors or directors, but there’s a lot of things that happen behind the scenes, whether its construction or wardrobe or makeup or visual effects. We should be training our young people with those skills and opportunities to get on-set experience.”

One of the thriving parts of the industry in Baton Rouge and on Celtic’s lot is Crafty Apes, the largest cinematic visual effects company in Louisiana.

Launching in January 2020 as part of a larger network with seven offices across two countries,  the group is involved from script-to-screen on most all projects they provide effects for, head of studio Sam Claitor explains. As soon as a production gets off the ground, Crafty Apes is there, working with the filmmakers to develop a film’s visual language through its effects.

“I always say working in visual effects means we work in tech,” Claitor says. “The technology is always evolving so a big part of our job is staying ahead of the curve.”

Their work has kept them busy, with local productions like Where the Crawdads Sing and Home Team booking them well into next year. And in fact, Crafty Apes helped LSU install and develop its virtual production stage earlier this year. 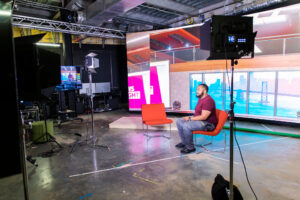 Between the virtual production innovations at LSU and the work being done by Crafty Apes at Celtic, the future of Baton Rouge’s film industry is operating on a digital frontier, bounding with possibilities.

“It’s like the wild west right now,” Ostrenko says. “The future is this merger of the virtual and the physical and what you can do between that.”

With films and television shows utilizing technologies like motion capture, virtual sets and computer generated images more and more, institutions in Baton Rouge are on the cutting edge of bringing what’s on the big screen closer to reality than ever before.

This is the second part of a two part story diving into the future of the Baton Rouge film industry. For a more general overview of the current state of Baton Rouge’s film industry, click here!