Elementary school-age children walk in quiet formation down cheerful hallways trimmed in bright Kelly green. Some are headed to French, Spanish or Mandarin classes, while others are making a beeline for biology, English language arts or even Latin. The thespians in the group find their way to the black box theater, where they’ll work on dramatic productions they may later perform on the school’s main stage.

Cubbies that hold each student’s books and backpacks line the walls, cradling—among other items—day planners that even the youngest students are expected to use to help manage their time.

Welcome to BASIS Charter School’s kindergarten through 7th grade Materra campus, part of a wave of new local charters that are changing the conversation about school choice in Baton Rouge. BASIS Materra, located near Woman’s Hospital, and a sister Mid City campus that opened in August, are run by Arizona-based charter school operator BASIS, a 32-school network of high-achieving institutions in Arizona, Texas and Washington, D.C. Known for an accelerated, fast-paced curriculum, BASIS aims to place its graduating seniors in some of the most competitive colleges in the country. And because it’s a public charter school, it’s free and features open enrollment.

“At last, we have unprecedented choice, and school opportunity that we’ve just never witnessed in the city before,” Meyer says. “Historically, it’s been really confined to the wealthy and well-informed to be able to navigate and have the kind of options for where your child goes to school.”

Charter schools have had a lengthy history in Baton Rouge. In 1995, the Louisiana Legislature passed a law making it possible for city and parish school boards to authorize “the creation of innovative kinds of independent public schools for pupils.” Charter schools, which were garnering attention around the country, were starting to give high-poverty communities a tuition-free, open enrollment alternative to often low-performing schools to which their children were assigned.

Since the late ’90s, many charter schools have emerged in Baton Rouge for that same purpose: to provide an educational alternative while still being a tuition-free, publicly funded institution.

New Schools for Baton Rouge aims to help charter schools be more successful, to build relationships with the public school system and to attract and support a cadre of national charter school operators with a proven track record for success.

Along with BASIS, several other high-profile operators have opened charter schools in Baton Rouge, due to front-end work by NSBR. Those school operators include IDEA Public Schools, a Texas-based charter launched by two Teach for America alumni that has nearly 140 campuses nationwide, and Geo Prep Academy, an Indianapolis-based model known for its teacher training and five-pillar academic model.

Another well-known charter, KIPP, short for Knowledge is Power Program, will finally open in the Capital City in 2022, having been approved this year. Several years ago, civic leaders frustrated with local public education attempted to recruit the operator, but the effort was rejected at the time by the East Baton Rouge Parish School Board. KIPP went on to open several campuses in the South, including New Orleans and Arkansas. The current climate in Baton Rouge—considered favorable for charter operators thanks to NSBR’s work—made a big difference in KIPP’s interest in the community.

This summer, another high-performing charter operator recruited by NSBR, Great Hearts, was approved to operate in Baton Rouge and will open at the south end of Bluebonnet Boulevard near L’Auberge Casino & Hotel next year.

Despite the flurry of activity in the region, it’s not easy to open a new charter location. The role of NSBR has been to facilitate what can be an expensive and arduous process.

For example, the nonprofit has helped national charter operators identify property or available buildings in the Capital Region, and secure financing. The nonprofit has also raised significant funds to help new charter schools hire faculty in advance of its public per-pupil funding, which kicks in later. NSBR has also helped schools arriving in the community build relationships with key partners, including businesses, local leaders, parents, ministers and neighborhood activists. These relationships build trust in the community, and thus, help the schools attract new families. 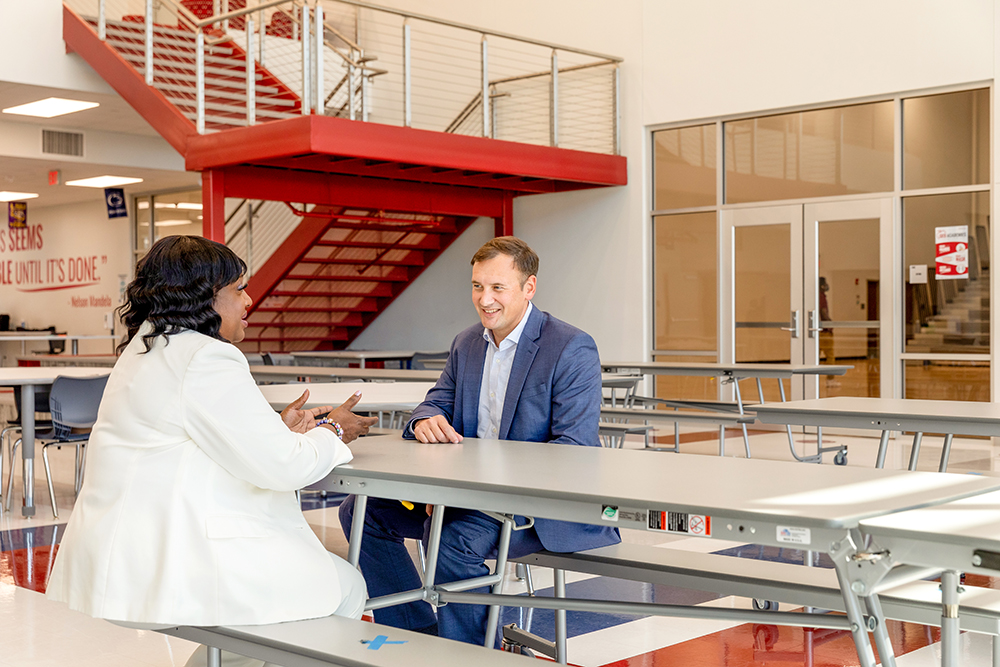 “(We have) school opportunity that we’ve just never witnessed in the city before. Historically, it’s been really confined to the wealthy and well-informed to be able to navigate and have the kind of options for where your child goes to school.”

Meyer says when NSBR recruits charter school operators, the organization is looking for institutions with a proven track record in academic achievement. The schools have succeeded, Meyer says, in part because they have an established curricula and method of teaching, and they can be flexible and more responsive to families. Moreover, they tend to attract teachers who are excited about the school’s mission and pedagogy. Schools also set the bar high for students, even if they’ve recently attended poorly performing schools.

By the same token, when national charter school operators look at Baton Rouge, they see a community that has spent several years successfully integrating charter schools into the public school system. And they find a nonprofit in NSBR that helps them integrate into the community smoothly.

The advantage of having a critical mass of charter schools is that each model offers something different to a family, Meyer says. “I think what you find as you begin to look at each of these schools is that they’re all unique.”

At BASIS, for example, students are taught an accelerated curriculum with the goal of entering college with significant college credit completed. “All of our kids in high school need to take at least six AP exams, but the (BASIS national) average is 12,” BASIS Materra Head of School Roberto Ramirez says. While the Baton Rouge BASIS schools currently only reach the 7th grade level, an additional grade level will be added every year.

Elsewhere in Baton Rouge, Geo Prep Academy’s four campuses, the first of which opened in 2015, have attracted a total of 1,700 students drawn to the charter school’s low student-teacher ratio and its commitment to helping children advance academically, even if they come from failing schools, Chief Academic Officer Sandra Douglas says.

The school has also developed a fruitful relationship with Baton Rouge Community College. Geo Prep’s high school students are brought to classes at the BRCC campus, enabling many of them to graduate with significant college credit. These factors have helped the school attract children and families from all over the parish, Douglas says.

“We service a lot of kids from (as far as) the Baker area,” Douglas says. “It’s very important that families have a choice. They show that when they get up at 5 in the morning to come here.”

In Baton Rouge, charter schools are publicly funded, privately managed schools that must obtain permission to operate by the East Baton Rouge Parish School System. They are funded through the same per-student state funding mechanism as other public schools in Louisiana. Functioning independently and often deploying leading-edge approaches to education, good charter schools are seen as being highly responsive to community needs and nimble in their decision-making. Since the mid-1990s, when charter schools first came on the scene in Louisiana, some have been more successful than others. If a charter school fails to meet its promised outcomes, the school system can intervene or close it.