The kids in his class fat shame him. He wheezes from asthma. His desire to lose weight is thwarted by school lunches filled with salt and fat, and no organized opportunity to exercise. His distracted parents worry about finances, and they save money by buying cheaper but unhealthier foods.

Like Charlie, they have obesity. They can’t see how much weight he’s gained over the years, or how isolated he’s become.

Charlie and his family are animated characters in an emotionally resonant national campaign intended to change the conversation around obesity. Their stories, crafted from real research on the obesity epidemic, show the human side of the disease, as well as the many factors that make it an intractable public health problem. The campaign was developed by the Pennington Biomedical Research Center, a local institution lauded worldwide for its research on the connection between nutrition and disease. 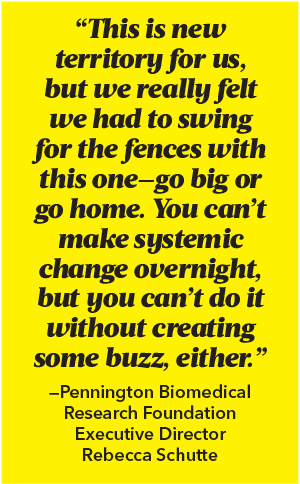 “We recognize that we have a role and a responsibility to be an advocate,” says Pennington Associate Professor Amanda Staiano, a pediatric obesity researcher. “We’re a credible source. We’re scientists, and we want to make sure that evidence is getting out and improving the health of people across the country and in Louisiana.”

The web-based campaign, which will also include billboards and radio and TV advertising strategies, was introduced now because obesity has reached epidemic status and shows no signs of slowing down.

The new website takes users on a virtual tour of a place called Obecity USA, where one-third of prime-time television commercials are for junk food, where 80% of children born to obese parents will also have obesity, and where one in three children lives in neighborhoods without sidewalks.

Charlie and his community are fictional, but the facts are real. Obecity USA is a stand-in for the United States itself, which has reached a crisis point in its failure to curb the disease. In the mid-’60s, only 13.4% of American adults had obesity. Today, that rate has shot to about 42%. In the next decade, fully half the population will suffer from it if the country remains on the same path.

The problem has been especially significant here in Louisiana, where two-thirds of adults are considered overweight or obese. Twenty percent of Louisiana children have obesity. The state continues to have one of the highest obesity rates in the nation.

The Obecity USA campaign is an attempt to encourage people to reconsider what they might think they know about obesity, including where to place blame.

“We want to change the narrative of how we talk about obesity,” Staiano says. “There are too many myths out there, like, we think obesity is because of willpower. We really have to show people that obesity is a disease, and it needs to be treated like a disease.”

Through visual storytelling and hard-hitting facts, the campaign demonstrates obesity’s multifactorial nature, and how easy it is to gain weight in America, due to what Staiano calls a “tsunami” of opportunities to eat poorly coupled with a built environment that often keeps regular exercise out of reach.

There are 16 fast food restaurants in the United States for every one grocery store. Portion sizes continue to expand. A calorie-packed restaurant meal is just a click away, requiring almost no physical movement. Healthy foods are not the default in the United States—they have to be dislodged from a landscape dominated by pizza, burgers, fried foods and sweets.

“We, as a community, have a role to play in improving our environment, because it has gotten so hard to eat healthy and to be physically active, and to control our weight,” Staiano says. “And so we really need to figure out how to make meaningful changes to our environment to get everyone healthy.”

Some progress has been made in Louisiana, Staiano says.

Obesity rates have plateaued in recent years. The state’s public schools are required to provide physical education for at least 30 minutes a day for children in kindergarten through eighth grade. Much more attention is being paid to “complete streets,” and the need for more sidewalks for biking and walking. A transit-centric master plan is underway for north Baton Rouge. And there have been some incentives for grocery stores to move into food deserts, Staiano says.

“I also think the school breakfast and lunch program has improved tremendously over the past several years,” she adds.

Still, there is a long way to go. Obesity, considered an epidemic, is linked to 300,000 deaths in the United States annually. Moreover, research shows that obesity puts individuals at risk for getting sicker from COVID-19 and other viruses, according to the Robert Wood Johnson Foundation.

The Pennington Biomedical Research Foundation paid for the campaign. Executive Director Rebecca Schutte says the foundation was eager to bring a fresh approach to a problem that’s been discussed for years. It worked with national media agency Rokkan (now Razorfish) to create the website, which was deliberately edgy.

“This is new territory for us, but we really felt we had to swing for the fences with this one—go big or go home,” Schutte says. “You can’t make systemic change overnight, but you can’t do it without creating some buzz, either.”

The Obecity USA website welcomes visitors to the “fastest growing place in the world,” a place that’s “easy to get to, and almost impossible to leave.”

Ezra, another child suffering from obesity, is shown sympathy by a carnival weight guesser, who, rather than guessing her weight, explores the many ways Ezra’s condition has been out of her control, “because she was never in control” of her diet or routine. The site couples these stories with tourism tabs that give Obecity USA the feel of a real destination. But click on a feature like “Nightlife,” for example, and discover how obesity feeds insomnia, anxiety, loneliness and binge-eating.

The campaign hopes to raise additional research funds for the study of obesity and rally communities to improve policies on nutrition, physical activity and the built environment, which includes access to parks and sidewalks.

The goal is to end the epidemic by 2040, which means shrinking the rate of individuals suffering from it to about 5%, Staiano says.

For more on the campaign, check out the website visitobecity.org.

The Government Street redesign wraps up this summer, so check out the new spots along the corridor