Like other performing arts organizations, Theatre Baton Rouge was hit hard by the pandemic, losing tens of thousands of dollars in revenue from shuttered performances, and reinventing its operations several times to accommodate each phase of the pandemic.

Now, Theatre Baton Rouge and other smaller local theater companies are looking forward to what they believe will be a far more predictable season.

“We made it through and cannot wait to get back to normal,” Ballard says. “Everyone pulled together, and we made it work. I’ve never been prouder to be a part of this community.”

Theatre Baton Rouge will stage 11 performances from August 2021 to July 2022, including several musicals, which had been totally restricted during the pandemic due to the high rate of germ spread in vocal performance. 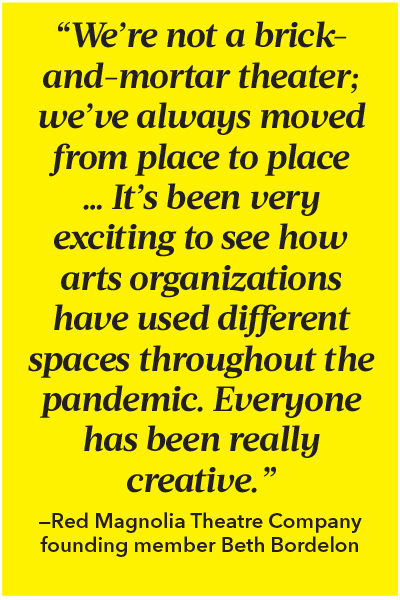 Ballard says seat sales in the Florida Boulevard’s main stage theater will return to pre-pandemic levels; all 327 seats will be available to reserve. Its smaller studio theater will also be back to normal.

Live theater, which requires both actors and audiences to occupy tight spaces, looked a lot different this time last year. Live musicals were nonexistent. During the shutdown, smaller dramatic or comedic performances were broadcast over Zoom with minimal casting. In these carefully choreographed productions, even the actors were separated by their computer screens.

Playmakers is also anticipating a more robust fall, but its team still isn’t sure when performances will be allowed to take place inside its home facility, the LSU Reilly Theatre, says executive director Todd Henry.

“We are very hopeful about a Christmas show,” Henry says, “and we could be doing some things this fall.”

Henry says Playmakers will follow the lead of the LSU School of Theatre and its facilities, which include the Music and Dramatic Arts Building and the Claude L. Shaver Theatre. But if things take time to open, Playmakers will deploy other options, including staging outdoor shows at Pointe-Marie Square, inside the neighborhood off River Road near L’Auberge Casino and Hotel. Playmakers held two performances of A Midsummer Night’s Dream at Pointe-Marie in May, a work deliberately selected because it was easy to stage outdoors, Henry says.

In fact, Playmakers was one of several arts organizations that held events at Pointe-Marie. The development opened its expansive outdoor village square to regular live concerts, arts shows and live theater throughout 2020, and that will continue this year, says broker Lee Ann Miracle, who sells the development’s residential properties.

“We had been trying to get arts programming in, and COVID-19 made it an easy sell last year,” Miracle says. “We try to do a wide variety of things that appeal to the community. We like having groups come in.”

Red Magnolia Theatre Company was one of the first local arts organizations to stage a performance at Pointe-Marie last year. Founding member Beth Bordelon says the company is planning four staged readings and one full production for the 2021-2022 season. She isn’t sure where they will take place yet, but says Pointe-Marie is a likely possibility.

“We’re not a brick-and-mortar theater; we’ve always moved from place to place,” Bordelon says. The troupe was founded by a group of women interested in staging the work of female playwrights. In its three-year tenure, Red Magnolia has performed at places like Brew Ha-Ha, Mestizo and Theatre Baton Rouge’s studio theater.

Bordelon says the pandemic helped decentralize the idea of live theater. Patrons got used to finding performances in unexpected locations.

“It’s been very exciting to see how arts organizations have used different spaces throughout the pandemic,” Bordelon says. “Everyone has been really creative.”

Lots of chances to see live music, plus more cool events this week in Baton Rouge