The staff left behind more than 40 years of decrepit and insufficient space, climate control, kennels and a clinic trailer with a hole in the floor.

With the move, our community also left behind the idea that shelter animals’ lives were not worth saving.

It did not come quickly or easily.

CLAWING ITS WAY UP FROM THE BOTTOM 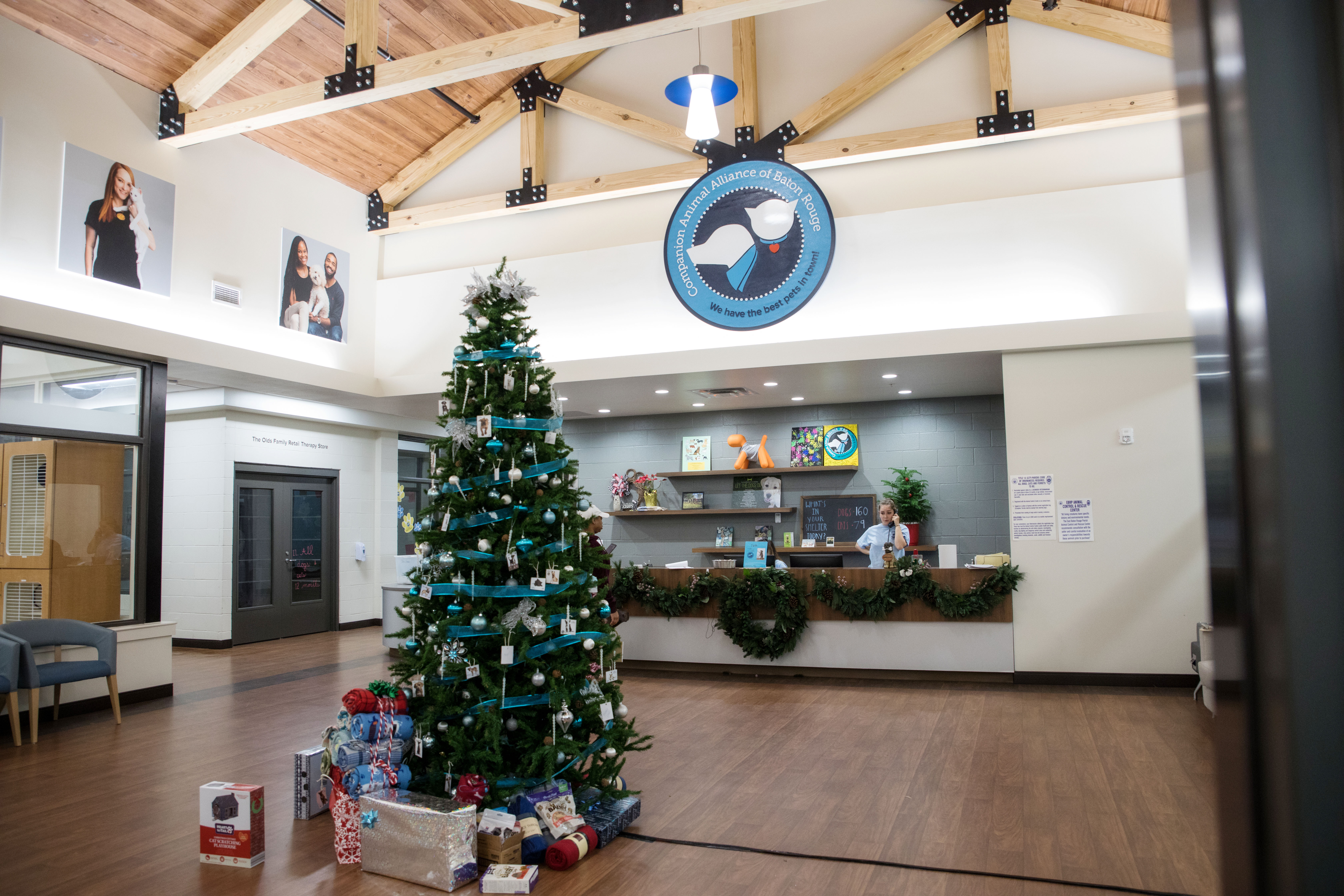 As a municipal service, East Baton Rouge Parish Animal Control is mandated to protect the public from disease and injury caused by animals. The department is obligated to remove animals roaming city streets and take in any unwanted animals from the public, including dogs, cats, lizards, horses, etc.

For decades, Animal Control remained a low priority in the city’s budget and maintained a low profile—across from the airport behind the East Baton Rouge Parish Prison—because nobody was looking to adopt these animals.

“I remember when [Animal Control] had iron cat cages from the 1970s with fixed food and water bowls,” says longtime animal advocate and CAA board member Cathy Wells. “If the kittens were so tiny they couldn’t reach them, they were out of luck and literally starved to death.”

In 2010, BRAF created CAA as a nonprofit and soon contracted with the city to provide shelter services.

Early on, CAA’s board recognized the need for a new shelter and adoption center. Before launching a capital campaign, though, they knew they needed to gain the community’s trust. They started by working to improve the 80% euthanasia rate and conditions at the existing shelter.

CAA also lobbied the Metro Council to adequately fund shelter services, as well as change an ordinance to allow for the trap, neuter and release of neighborhood cats.

In 2015, CAA’s board approached LSU Board of Regents in hopes of placing a new shelter on the LSU campus.

Besides increased visibility, the location offered opportunities to collaborate with the LSU School of Veterinary Medicine. After much negotiation, CAA began a capital campaign to raise $12.75 million for the new facility on Gourrier Avenue.

BARKING UP THE RIGHT TREE

“The first time I walked into the new shelter and saw the animals, I cried,” CAA board member Lisa Adamek says.

She was astonished by the effect the new floor plan has had on the adoptable dogs.

“In the old shelter, the dogs could see one another. They would become over-stimulated, feel territorial (or frightened) and bark constantly,” she says.

Now, cinderblock walls surround each kennel. Each dog has a private, safe space.

“It’s a much less stressful environment,” Adamek says. “This is what it’s supposed to feel like for these dogs.”

The shelter’s proximity to the LSU vet school has the potential to improve the animals’ health as well. The new cavernous surgical suite has allowed CAA to increase the number of vet students on shelter rotations.

Besides learning animal handling and practical skills, the rotations offer “one of the few opportunities for students to look at an animal from tip of the nose to tip of the tail and make a diagnosis,” explains Dr. Joel Baines, a veterinarian and dean of the vet school. “Physical exam is the most important thing students learn because an animal can’t tell you what’s wrong.”

LEADER OF THE PACK

The new shelter is likely the country’s first municipal shelter built on a vet school campus. That means our city—once infamous for its antiquated shelter and abysmal euthanasia rate—is now being hailed an animal welfare innovator.

The groundbreaking partnership between the LSU vet school and CAA has garnered the interest of major funders such as PetSmart Charities, which donated $200,000 toward the shelter’s surgery center and training for vet students.

As more funds become available, LSU will look at new enhanced educational programs that would allow students to treat injured shelter animals at its vet school.

CAA is becoming a benchmark for mid-sized municipal shelters looking to modernize—but the state-of-the-art building is only part of the reason.

Even before the move, CAA overhauled policies and nearly inverted the city’s euthanasia rate into its save rate. In 2010, 20% of the 8,000 to 10,000 animals who entered the shelter yearly left alive. Now, 74% of animals are rehomed or trap-neuter-released back to their communities.

The new shelter does not have increased capacity to hold more animals. To continue its trajectory, CAA must decrease the time animals spend in the shelter and get them into a new home or rescue facility faster. That will take community support.

“We were able to create our own environment,” explains CAA operations director Amanda Pumilia. “The building’s design is calmer for the animals and more inviting to the public. I hope the community will be here for the animals.”

REDUCING THE NUMBER WHO NEED RESCUE 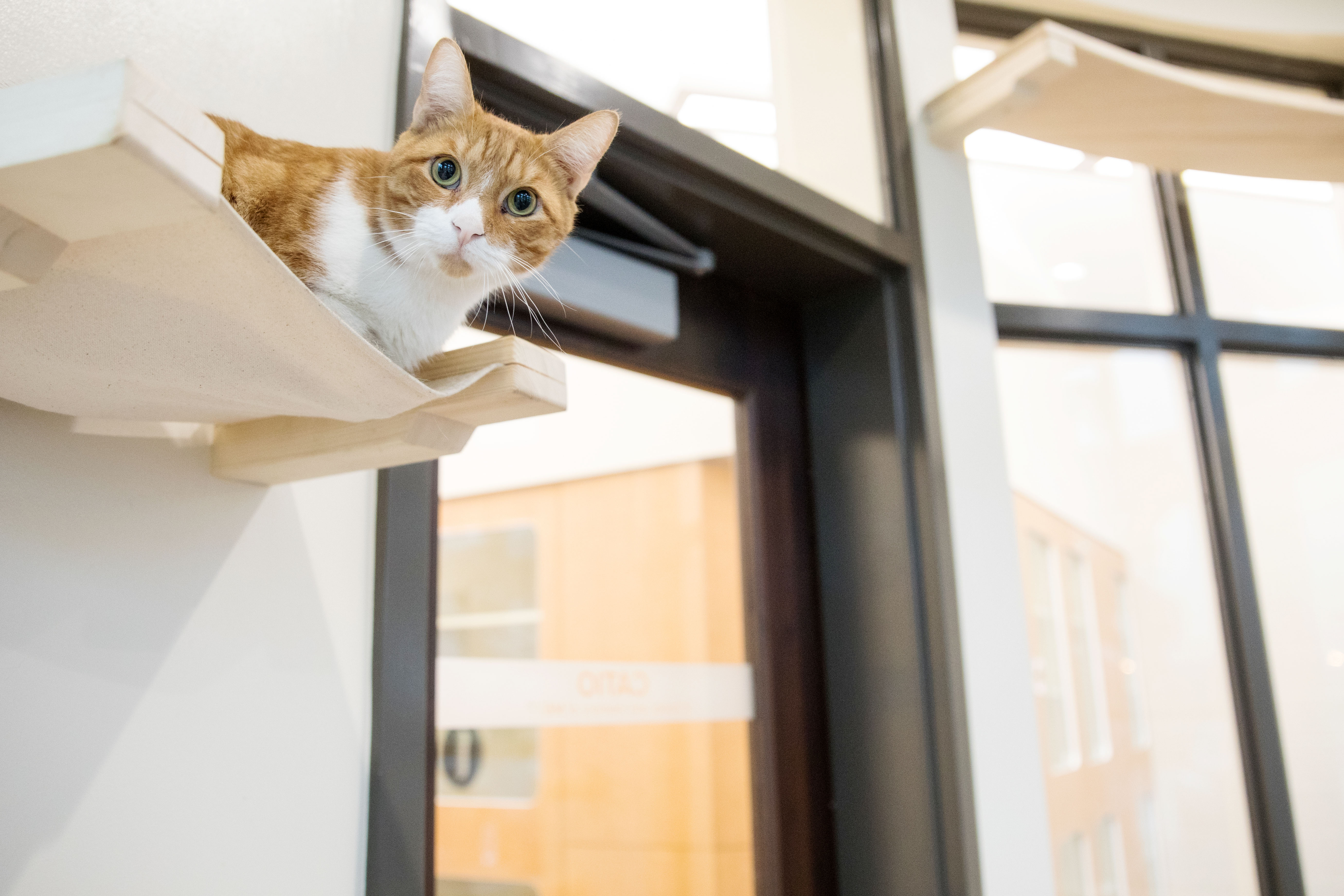 Companion Animal Alliance is not the only local shelter that has made strides. In the past two years, Cat Haven and Capital Area Animal Welfare Society renovated their shelters.

With a bequest from Thaddeus “Ted” and Ana Anthos, CAAWS invested $100,000 in its 30-year-old building, including its driveway, fencing, 14 dog runs, isolation area and cat room.

“Many people say they could never go into a shelter because it’s such a sad place,” says CAAWS president Glenda Parks. “But, when people walk in CAAWS now and see the fresh shelter filled with families interacting with all these cute furry faces, they see a happy place.”

CAAWS takes in and adopts out dogs and cats from seven local kill shelters and the public. As part of its primary mission, the nonprofit offers spay/neuter vouchers for low-income individuals and $25 coupons for the general public.

“Spay/neuter is the only way to reduce unwanted litters that end up in the shelter,” Parks explains.

In April 2017, Cat Haven invited the community to the reopening of its shelter after a $200,000 renovation, which was funded by individual and corporate donors including a $12,000 PetSmart Charities grant for a ringworm treatment center.

Cat Haven now houses 100 to 150 cats and kittens, who are available for adoption seven days a week.

Some are looking for a feline family member. Others come for some kitty companionship. The daily visitor volume results in the adoption of about 1,300 felines each year.

CAAWS’ and Cat Haven’s efforts have been amplified by Friends of the Animals’ Dog Adoption House, breed rescues and an increasing number of small foster home-based nonprofits.

Municipal shelters in neighboring areas—West Baton Rouge, Iberville, Ascension, Walker, East Feliciana—have all undergone building and management improvements. That means an increasing number of pets are being rescued and rehomed outside of Baton Rouge.

“There are so many groups, and we all do our best to help as many animals as possible,” Decker says. “But that doesn’t put a dent in the demand. There are so many people looking for help for animals they’ve found, can’t keep anymore or inherited.”

While Cathy Wells and others have worked to stem the birth of unwanted animals with spay/neuter assistance for low-income pet owners, advocates agree reducing the number of pets needing rescue is the community’s next animal welfare priority.

“Now, it feels like we have the right place, the right combination of skills and the right relationships with LSU to make a lot more progress on some of the bigger issues in animal welfare, [such as] encouraging owners to spay/neuter their pets and controlling the spread of preventable disease.”  caabr.org

HOW YOU CAN HELP
Even if you can’t adopt or foster, there are many ways to help homeless animals

Be a kitty cuddler or puppy hugger: Dogs and cats are companion animals needing contact with people. Shelters never have enough staff to give the animals all the individual attention they crave. One hour can make a difference in a puppy or kitty’s life.

Bring treats, toys or towels: Due to infection control practices that help stop disease from spreading through the shelter, many items can’t be washed and re-used. Shelters always have a need for additional items.

Fur Ball: On May 18, CAA will crown the canine king, queen and court at its annual Fur Ball at Celtic Studios. furballbr.org

20th Krewe of Mutts parade: For its 40th anniversary, CAAWS has mounted a 2019 campaign to spay and neuter 1,040 animals. All of the Feb. 17 parade proceeds are dedicated to CAAWS’ spay and neuter programs. caaws.org

Cat Tails & Cocktails: All the cool cats will be on the prowl for the purrfect evening Sept. 27 during Cat Haven’s 18th annual fundraiser at the Crowne Plaza. cathaven.org

Click here to read more from our February Pet Issue.

It’s almost March. Will LSU be a part of the Madness?