The Kinchen family name carries some formidable weight around Baton Rouge, boasting some of the highest clout one can attain in this town: a long, decorated legacy in LSU football. 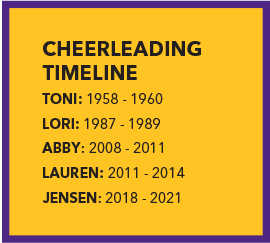 And, while the spotlight has traditionally shone on the Kinchen men wearing the purple and gold on the field, there is yet another Kinchen legacy that’s carried on just off the sidelines: a parallel lineage of Kinchen women cheering on the Tigers.

So, to shine a light on this side of the Kinchen legacy, 225 sat down with three generations of Kinchen women—whose tenures on the LSU cheer team date all the way from the late 1950s to the present.

We talk about their time on the team, their memories, and their thoughts on the Kinchen family legacy. And it’ll come as no surprise that their veins carry just as much purple and gold as their helmeted counterparts.

What’s one of your favorite memories?

Toni: It had to be just standing on the ground at the bottom of the stadium when everyone was yelling. I mean, that wasn’t 100,000 people like it is now, because they didn’t have the top row at all. But it was just the tumultuous roar of all the people in the stadium. It makes my hair stand up on my head right now.

Lori: I was a member of the only national champion cheerleading team at LSU, which was pretty exciting. Kentucky won every year. Kentucky dominates the cheer scene, to this day. But when we went, we hit a perfect routine, so it came down to us and Kentucky. And everybody thought Kentucky had it, so when they announced us as the winners, we were like, ‘Yes!’ And, honestly, I don’t even think that we were the most talented, but we were the most determined.

Lauren: Probably pregame, doing it before every football game. Every year they would do pretty much the same thing, but they would kind of twist it up with different stunts and different basket tosses and stuff. But it’s just the same pregame dance that has been passed on generation to generation. All five of us know the same dance.

Jensen: My freshman year, we beat Georgia at home, and we stormed the field. All the student section came onto the field. It was crazy. That was probably my favorite memory on the team. Also, when I was going into my junior year at LSU, during cheer camp in the summer, our coaches asked all of the LSU cheer alumni to send letters to our current team, just wishing them well and giving advice, and everyone got a random letter from an alumna. But when I opened mine, I had four letters, and I was like, ‘This is weird, because everyone else only had one’. So, Miss Toni, Miss Lori, Lauren and Abby had all written me letters, giving me advice and telling me about their time at LSU and that was super special, because I don’t know that there’s ever been a tradition like this, so it was really special to just share those words. 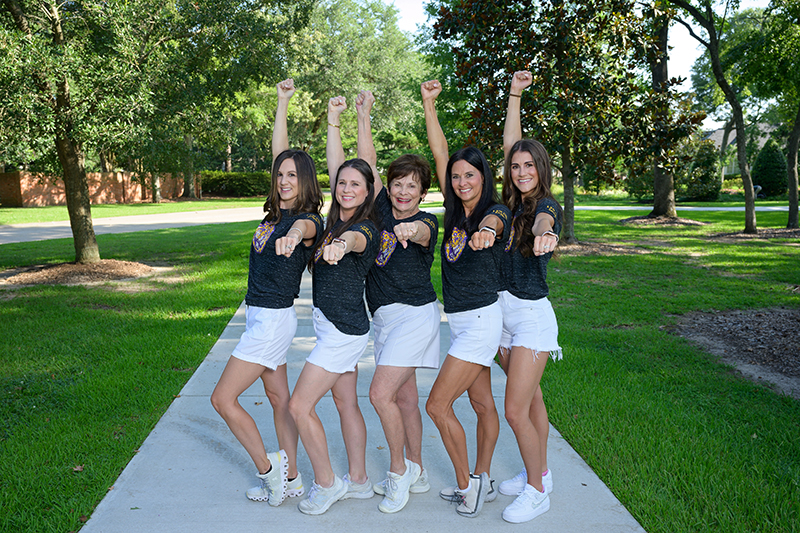 How does it feel to be a part of this family tradition?

Lori: I think we just all bleed purple and gold. I think it was just all of our paths. And it makes me laugh, because they always say that boys marry women like their moms.

Lauren:  I felt like I instantly bonded in the family. Being a part of a family of LSU cheerleaders, we can instantly relate to one another. We just have something in common and something to share and talk about, and it’s fun to see the different traditions that have been passed on throughout the generations. We have that one special thing in common, and so we can relate to each other a lot better.

Abby: It’s certainly unique. I do think that being an LSU cheerleader is certainly a sought-after position by many people, and few attain it. And, being born and raised in Louisiana, I realize what the weight of having that title is for you know, young girls who look up to the cheerleaders and everything. So I think it’s just a special opportunity to have that position in general, and then to have it continue in a family is even more unique. It’s cool to have those same bonds and memories, even though none of us were ever on the same team, but just having similar experiences and opportunities.

Jensen: It’s really special. We always say LSU cheer is a family, and for me that’s doubled because this is now my real family, but also my LSU cheer family.