Kevin Faulk has made countless memories in Tiger Stadium.

He rushed for 4,557 yards and 46 touchdowns—both school records—in his four-year LSU running back career. He graduated in 1999 as the SEC’s all-time leader with 6,833 all-purpose yards.

But the memory that stands out for Faulk didn’t come from any record-setting runs, game-winning touchdowns or monumental victories for the Tigers. It was all about the passion of the university.

“When we ran out the tunnel onto the field, the coach holds everybody behind the goal posts,” Faulk recalls. “One of the things coach (Gerry) Dinardo let me do was walk about
3 to 4 yards in front of everybody right before we ran out. It was at the time when ‘raising the roof’ was popular, and I raised the roof, and 80,000 people went (crazy). That feeling right before a game for an athlete, I will never forget that.”

After LSU, Faulk moved on to a 13-year NFL career that featured three Super Bowl titles and another five-year stint as an assistant coach at his alma mater, Carencro High School. But now he’s back where it all started, channeling that LSU passion he remembers and making new memories. But this time, he’ll be making them off the field. 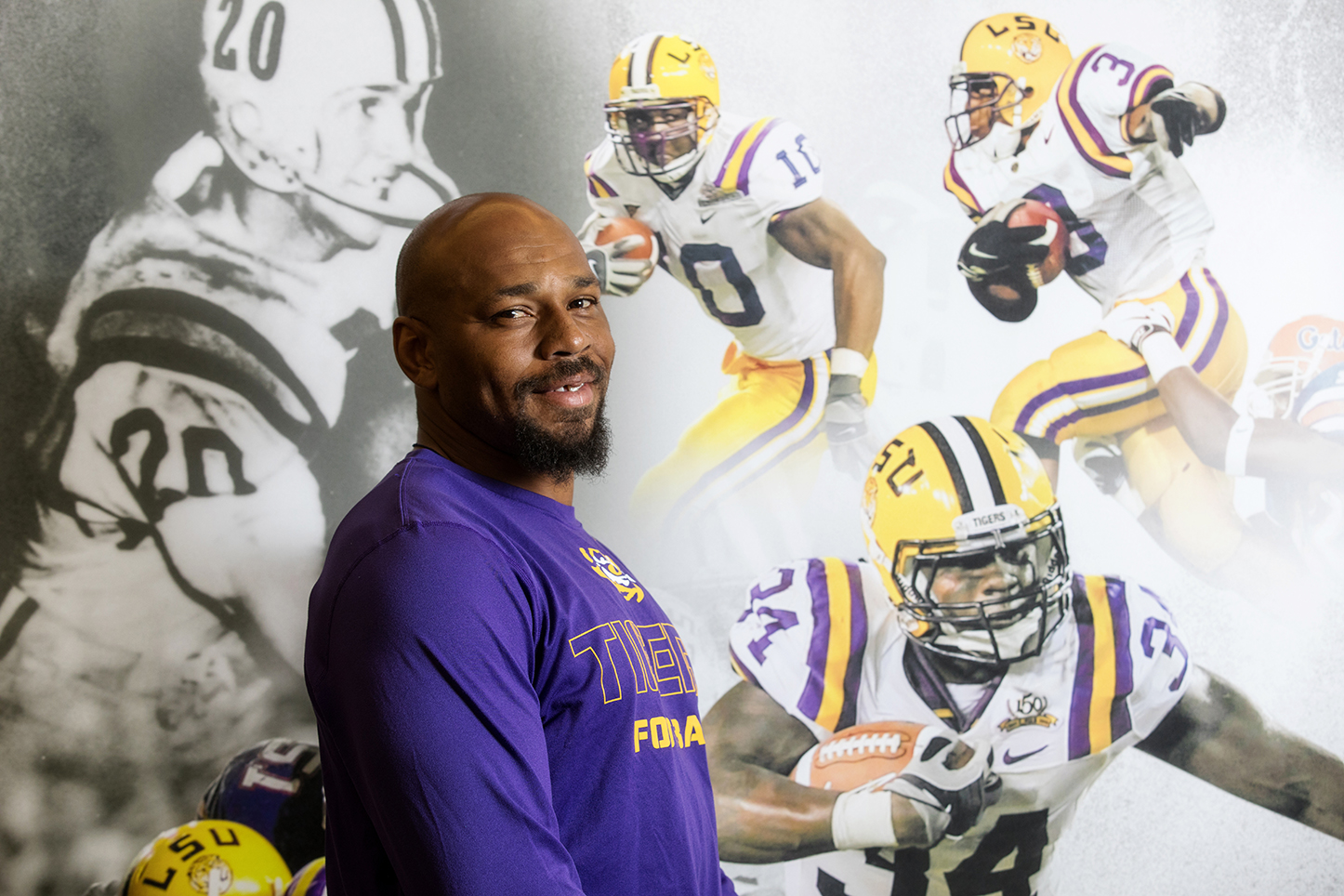 The 42-year-old joined the LSU staff in January as the director of player development—a title that may seem ambiguous to the average fan but has proven a perfect fit for Faulk.

And what does the job entail? “Everything,” Faulk says. “It’s about guys understanding what they’re doing here. We all know the guys have athletic abilities off the charts. That’s why they’re at LSU. But it’s outside of football that I deal with.”

That can mean anything from ensuring the players go to class and attend tutoring sessions to generally helping them stay out of trouble in day-to-day life as a college athlete constantly in the spotlight.

Having been the big man on campus, Faulk’s seen it all before.

“It’s those little things that I talk to them about,” he says. “I’ve seen a whole lot of situations within football and outside of football, so anything you need to talk to me about, I may have the answer. And if not, I can go find it.”

Faulk is a Louisiana native who opted to stay in-state for college despite countless offers across the country and ultimately learned under legendary New England Patriots coach Bill Belichick—it’s no wonder Ed Orgeron came calling.

Faulk’s skills and experiences are unmatched, but he admits there are other aspects of being a college athlete in 2018 that he wasn’t worried about back in the late ’90s, like social media.

Under NCAA guidelines, Faulk isn’t allowed to give any on-field coaching with his current title.

He said it’s been challenging to be “off the field” for the first time in his career, but it’s a step he felt he needed to take.

“I thank God every day for the opportunity to be able to play as long as I did in the NFL and to have a long football career,” Faulk says. “But my time of playing is up. I think he wants me to talk more about it and be more vocal with the guys. I love talking about football. I love watching football. I’m just trying to bring football to these young guys.”