By golden hour, there’s a crowd of thousands surrounding Bethany Church. In the shadow of the church’s famous trinity of tall white crosses, the crowd eagerly awaits Kanye West’s arrival. It’s the first Friday of November, but West’s Sunday Service is mere hours from starting.

Since January, the rapper has been staging Sunday Service events across the country, in cities like Los Angeles, Chicago, Atlanta, Dayton, Ohio, and even at California’s Coachella music festival. It’s all led up to the October release of the rapper’s ninth album, Jesus is King. The record’s gospel style is a sharp turn from West’s signature secular sound.

Tonight, that record is one week old, just long enough for the crowd to have already memorized its lyrics by heart. The sun sets before West finally walks into the center of the “stage”—nothing but a clearing on the lawn equipped with keyboards and pianos, a battery of percussion instruments, a couple of guitars and a few mics.

There are no elaborate lights, fog machines or barriers between him and the crowd. Just an open space in the middle of a sea of people. Some came to see West, some for the worship aspects and some out of simple curiosity. There are fans wearing the artist’s merch, while others stand patiently in church-ready clothing, eagerly anticipating the service itself. 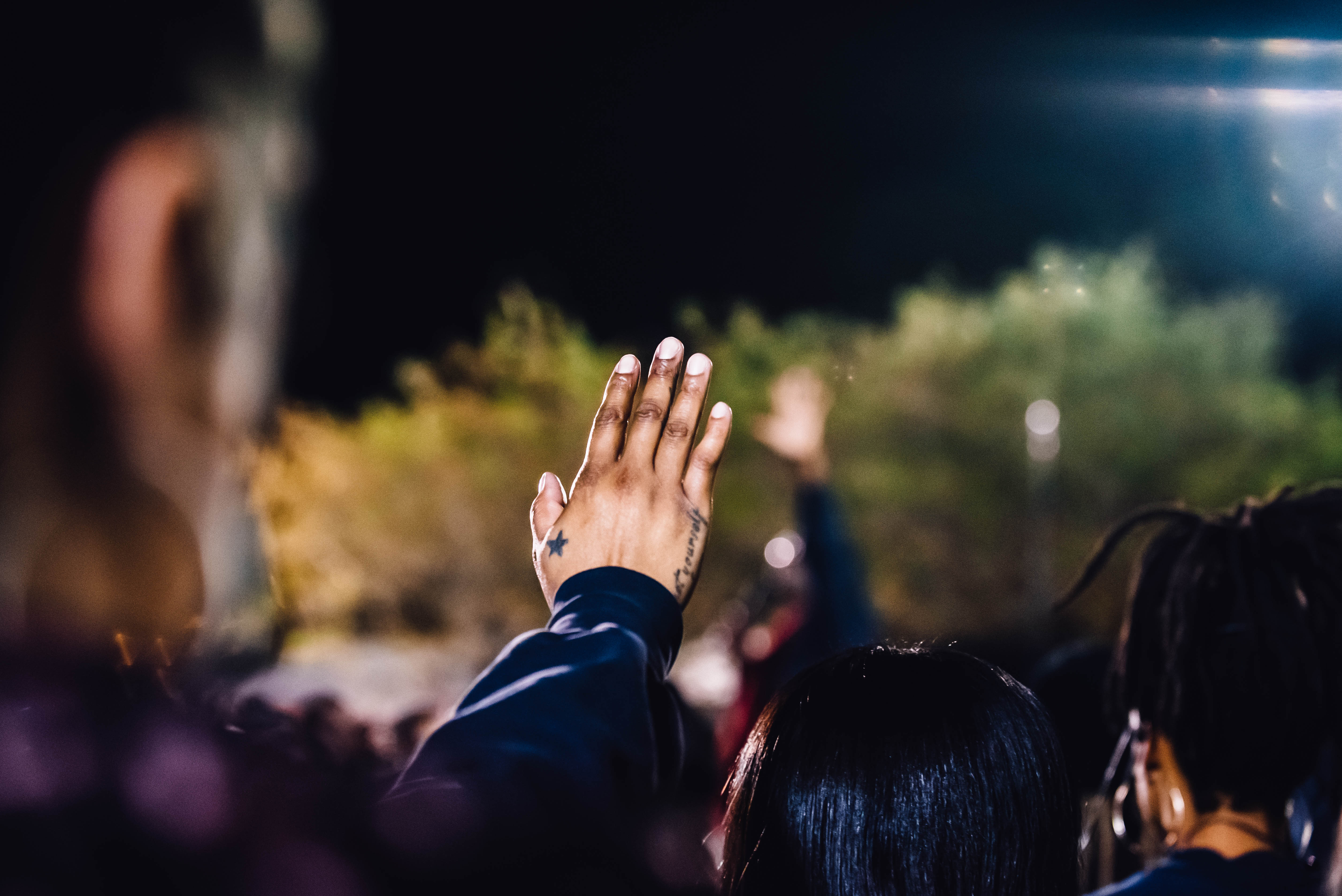 West’s three eldest children stand with their father, taking turns sitting on his shoulders and holding onto him. An 80-piece choir fills the remaining space. The show begins with one of Jesus is King’s best known lines: “Closed on Sunday, you’re my Chick-fil-A.”

The crowd roars. Tonight is West’s ode to Christianity, a place for celebration and community, music and spiritual connection. His excitement is palpable as he smiles ear to ear, singing with his children. Some audience members quickly become emotional, belting out the lyrics.

The choir harmonizes in “Every Hour,” another song off the October release, and the sounds ricochet across the sea of people. Four stadium lights shine down on the makeshift stage, illuminating the minimalist layout and in-sync chorus. The music slows as the mood shifts from energetic to calm, centered, ready for a sermon.

Pastor Jason White leads with uplifting words before the choir transitions into a rendition of “Hallelujah, Salvation & Glory.” Everyone—including daughter North, at this point on Kanye’s shoulders—sings along to the slow, devout lyrics. Teary-eyed onlookers cry out “For the Lord our God is almighty / Yes, the Lord our God is omnipotent.” 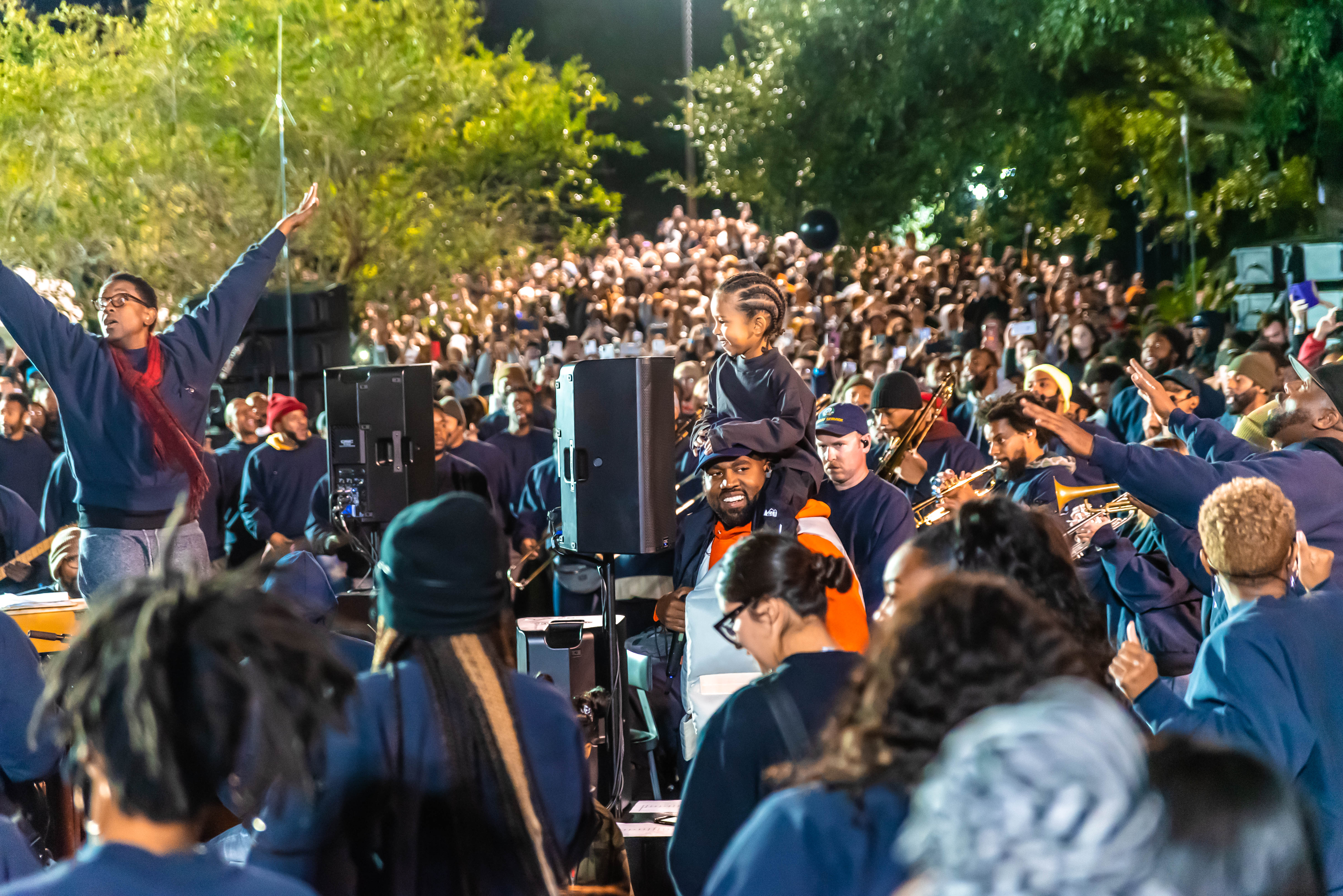 An older woman looks emotional as she raises her arms to the sky, soon joined by the entire crowd as the chorus moves into a rendition of “Father Stretch My Hands.” Thousands of arms fill the air, and the audience falls silent. For just a few moments, everyone focuses on one thing: the music.

Another sermon recalls the story of Bartimaeus, a blind man in the Bible healed by Jesus. He wouldn’t have gotten his sight back if he hadn’t kept his faith strong, even when others doubted him. Speaking up for your faith is critical no matter who’s against you, White tells the crowd.

As the show nears its end, the audience is asked what song they want to hear. Unanimous shouts give way to “Jesus Walks,” one of West’s most famous faith-related songs.

The song is meant to unite believers of all different backgrounds, showing the common link humanity shares through religion.

The powerful lyrics, matching the intensity of the chanting choir, cause the crowd to erupt. After a long buildup, it’s a fitting conclusion to a night Baton Rouge won’t soon forget.

See more photos from Kanye West’s Sunday Service in our gallery below:

This article was originally published in the December 2019 issue of 225 Magazine.