One of the cornerstones of the game-day pageantry is the performances by the Golden Band from Tigerland, which provides the legendary soundtrack before, during and after the game each Saturday in the fall.
225 caught up with drum major Beau Bujol and Golden Girls co-captain Eleanor Koonce to get the scoop on the experience from everyone’s favorite game-day entertainers.

225: What is the game-day experience like from your perspectives?

Beau Bujol: We meet up around 8, 9 o’clock to get ready for rehearsal. We rehearse the morning of game day in the indoor football facility. After that, we go to the band hall for lunch. Then, we go up to the Greek Theatre and do different sectional warmups. Each section has their spot, and they play a warm up for the crowd. We head down the hill and witness the sea of purple and gold, which always gives me goosebumps. We play pregame, and then it’s game day from there. For the rest of the game, we cheer on our team, obviously. On offense, we’ve always got to be alert. If we’re not paying attention, the first down might sneak up on you. You’ve got to be very cognizant of what’s going on, and on defense you’ve got to make Tiger Stadium roar. At halftime, we perform our show to Tiger Stadium and always get a very loud applause. Then the rest of the game, the Tigers win, and we play the alma mater for the team. Then we march all the way back to the band hall. We don’t get back until around 11 o’clock p.m. When we get back, we watch video of the halftime show and pregame because we’re always striving to get better as an organization.

Eleanor Koonce: We usually begin practice about seven or eight hours before kickoff at the indoor football field, warming up before the band arrives. We’ll run through the show for the game a couple times, and then we’ll go over our show for the PMAC. From there, we’ll head to Tiger Band Hall, where we have moms and other people help serve food, and we freshen up after getting sweaty at practice to look presentable for the game. Then we’ll walk over to the Greek Theatre, meet with our family and fans to take pictures and talk to kids. That’s when we get to see all the little girls dressed up. After that, our drum major will blow the whistle, and we’ll get lined up for marching down the hill. We’ll march from the Greek Theatre to Mike the Tiger’s cage and perform pregame there for all the fans lined up, which is super special because everyone is surrounding you and cheering you on. Then we’ll march into the PMAC, where we’ll perform a portion of our halftime show, play “Hey Fighting Tiger” and a couple other cheers. We’ll march over to Death Valley, all the way into the stands, perform a couple dances, then we’ll head down onto the field to perform pregame 15 to 20 minutes before kickoff. After pregame, we’ll march back into the stands, perform our stand dances for the rest of the game. Then we march back as a full band ensemble back to Tiger Band Hall, where we’ll watch our halftime show and our pregame and self-critique before we get released to go home. 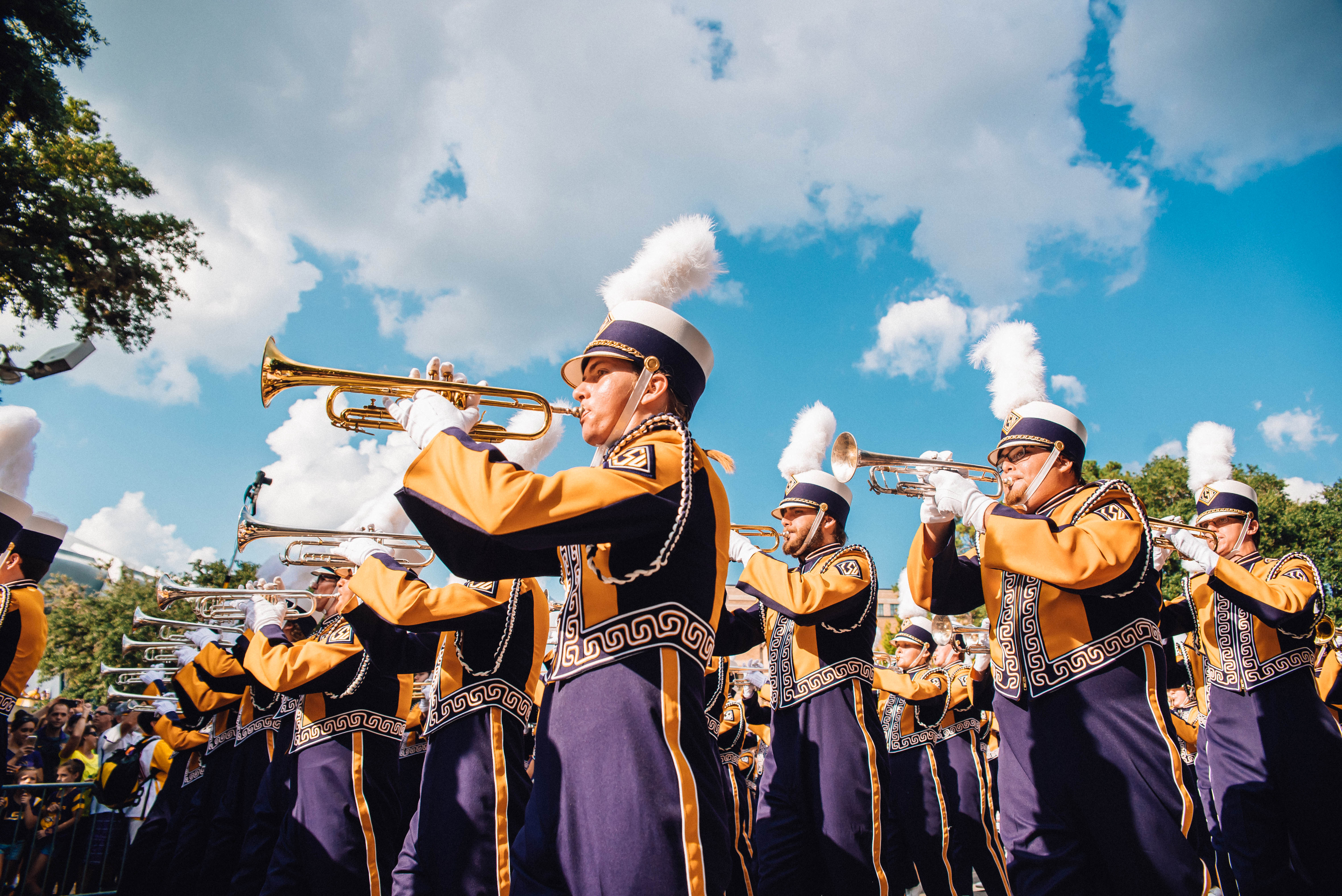 Bujol: It starts with practice every day of the week in the afternoon, Tuesday through Friday. We have an amazing staff of band managers and an instrument repair man on campus that makes sure all our instruments work, are shined and ready to go. After lunch on game day, we transition into uniform. All the uniforms stay safe on campus, locked up secretly. We gear up and the section leaders make sure all our uniforms look the same. Once we pass the inspection, as you will, then each section of the band can go out into the Greek Theatre. There’s a lot of logistics that go into it, but it really is a testament to the hard work of the band that we put in throughout the week.

Koonce: We have practice every day with the band, including Fridays. We’ll try to have the girls get their spray tans on the Thursday before so they’ll be ready well in advance, as far as that goes. After practice, we’ll keep the girls if more work is needed and do any last-minute reviews. On the night before, sometimes we’ll have a sleepover with the girls if it’s an early game, and we get ready together in the morning. To get through the game day, there’s a lot of caffeine. We’ll have five-hour Energy shots on deck and some coffee in the morning.

225: What is the biggest misconception from the average fan about your role on a game day?

Bujol: The Tiger Band supplies some of the major spirit in the game. If you can imagine a football game without the band, it would be very quiet, and somewhat boring, even for LSU. You can’t think of LSU getting a first down without us playing. It kind of adds that extra atmosphere. Without the Tiger Band, I believe the game-day experience for the entire stadium can be dramatically different.

Koonce: Lots of people ask me who does our makeup and hair, which is hilarious to me because I wish someone did my makeup and hair. Honestly, we all do it ourselves on Saturday after practice in Tiger Band Hall, where we have a lot of mirrors. 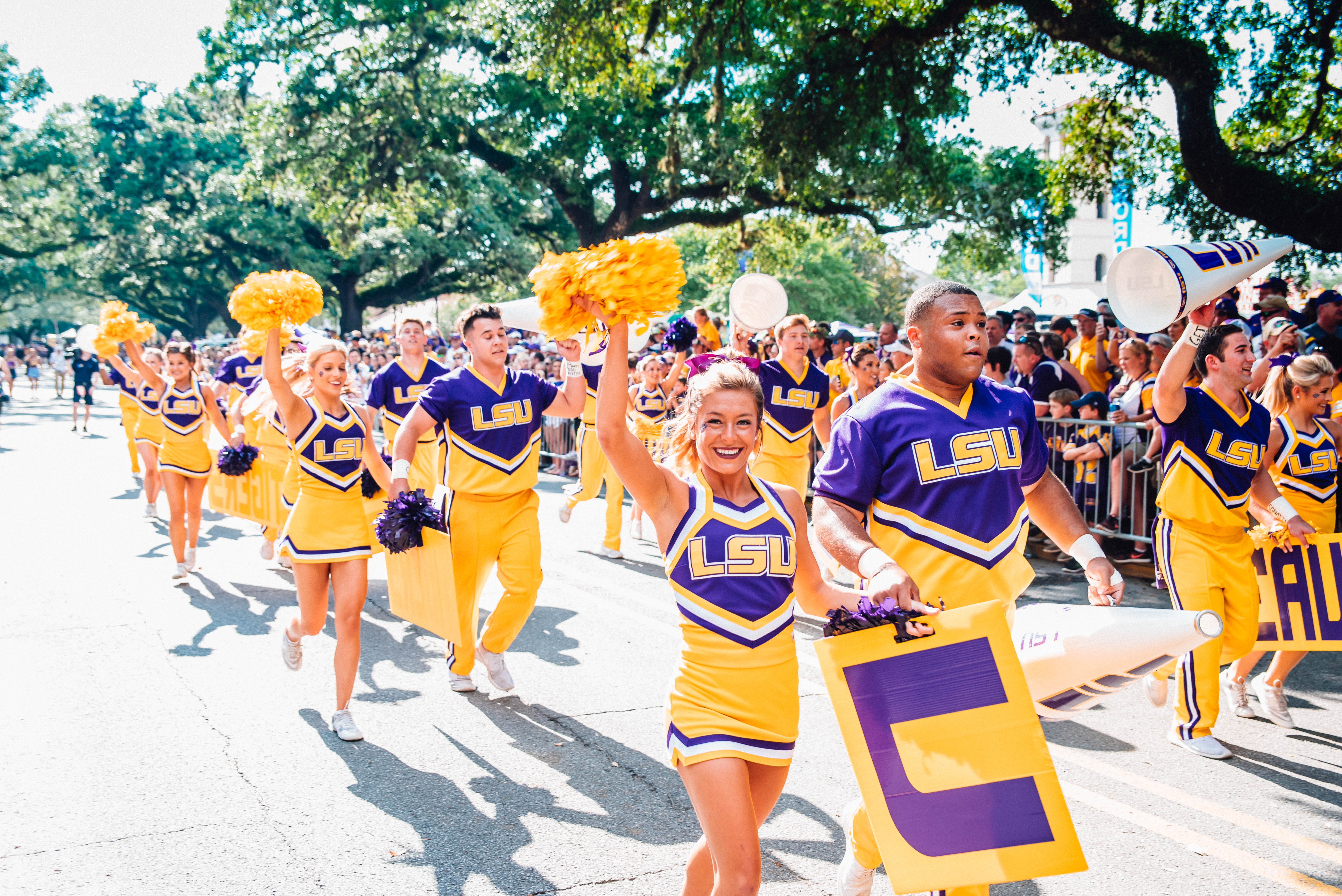 225: What is your favorite part of game day?

Bujol: One of my absolute favorites is when we play pregame on Victory Hill and run down the hill. When you make that turn off Dalrymple [Drive], you can’t see the ground. It’s just people in purple and gold there to see the band. The football team, at that point, has already passed by. The fans are just there to see the band and hear us play and run down the hill. To me, that’s just such a cool experience to see that many fans cheer for four notes.

Koonce: The Greek Theatre because we get to see a lot of the young fans. My dad was in Tiger Band, and when I was girl, we would always meet the Tiger Band and go march down the hill with them. It’s special to have it come full circle. I’ll see other young girls dressed in Golden Girl uniforms, and it will bring me back a little bit to when that was me.

225: Compare walking down Victory Hill versus walking into Death Valley.

Bujol: When we run down the hill, we’re making our entrance as a band into the stadium. When we play pregame on the field, it’s a unification of all the fans, all the hard work of the football team, the cheerleaders, everyone coming together. This is LSU, this is what we’re all about, and we’re going to get out of here with win.

Koonce: When we perform pregame in Death Valley, there’s nothing like it. Everyone is clapping along, and you feel the energy of everyone in the stadium. Basically, it’s the whole city gathered together, and it’s a real sense of community I feel with all of Baton Rouge.

225: What is the biggest challenge you face on game day?

Bujol: It’s a long day. We work hard to keep ourselves hydrated—we drink lots of water throughout the day. Maintaining our stamina, drive and excitement for the game is crucial. You can go all out for the first quarter, but if you get tired during the third quarter, that’s probably when the team and stadium needs the band the most to pump up the crowd.

Koonce: Keeping the energy up and keeping everybody motivated and focused can be challenging. To counteract that we have the student section next to us, which seems to never get tired. It’s great to feed off their energy.

225: Are there any game day experiences you may miss out on by serving in the band?

Bujol: As a band member, we lose out on LSU’s famous tailgating scene before the game. However, you can only be in the college marching band for a small period of time. You can tailgate and do all the other stuff fans do for the rest of your life if you want to, but as a band member I don’t think I’m missing out on too much. Our role in Tiger Stadium and as representatives of the university is such a great and humbling responsibility and a great honor. If anything, it’s made my college experience 10 times better.

Koonce: Sometimes I’ll feel like I’m missing out on tailgating because I grew up tailgating so I know exactly the fun that I am missing. But there’s nothing like being on the other side of things and getting to be with my teammates and dancing for the school I love. I can always tailgate after I graduate. 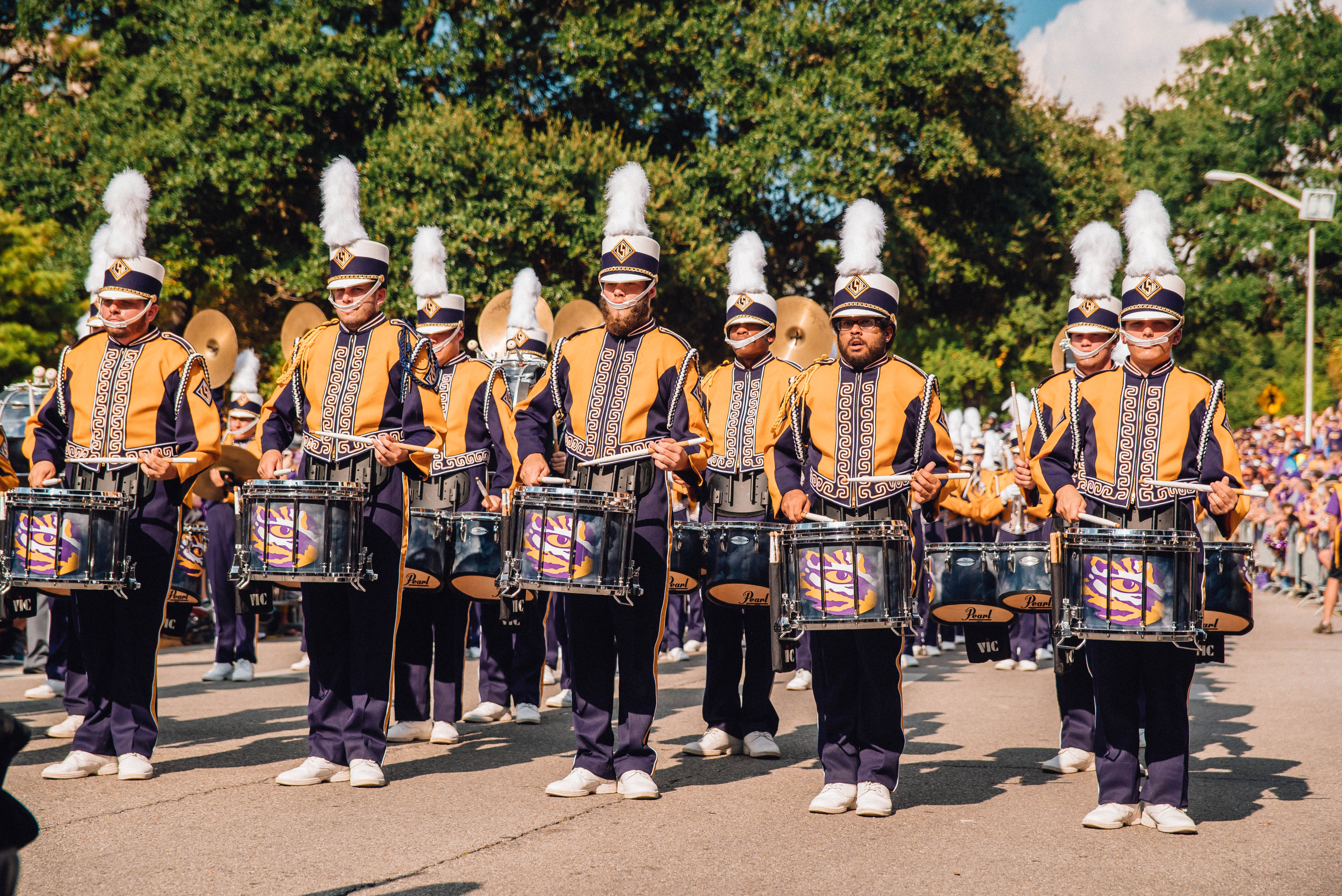 225: Describe the feeling you get while performing at halftime of a football game.

Bujol: Excitement. It’s the culmination of all the work we’ve put in during the entire week

Koonce: Sheer happiness. I’ve grown up dancing my whole life. The great thing about live music is you feel the energy itself—it’s not coming from a stereo, it’s surrounding you. That makes it so easy to dance to my fullest and perform for all the fans whenever I have the Tiger Band surrounding me.

225: What are you most looking forward to this year in your Tiger Band leadership role?

Bujol: I look forward to representing my peers. One of the big roles as drum major is as a representative for the band as a whole. I want to represent all the hard work that they do on a daily basis.

Koonce: I’m excited to make the team my own. Every captain makes changes to update the team, and I’m interested to make my mark this year on Tiger Band.