Its culture is a unique blend of French, Spanish, African and other global influences, put on full display through extravagant festivals, diverse music and historic architecture. Its food is an even crazier blend of flavors that make for some divine dishes you simply can’t find in most other states.

But its people might be the most dynamic of it all—loud, proud and passionate, particularly when it comes to their sports teams.

So it makes sense that the majority of the state was overly excited when Larose native Ed Orgeron was tasked with taking over the LSU football team back in 2016. He was Louisiana, through and through. He didn’t just live the culture; he embodied it. He was “one of us.”

But after a rollercoaster ride through the Orgeron era, which saw everything from titles and trophies to accusations and allegations, the state’s flagship university finds itself heading in a new direction under new leadership and with a new, non-Cajun coach at the helm. And the first roster he’ll inherit is loaded with Louisiana talent, headlined in part by a star-studded 2021 recruiting class that ranked as the third best unit in the country.

To some Tiger fans, Brian Kelly’s lack of experience coaching in the SEC was slightly worrisome. In fact, the furthest south he had ever coached was the University of Cincinnati—more than 13 hours and 800 miles away from Tiger Stadium.

At his introductory press conference, Kelly addressed this concern head-on.

“This is my first day in Louisiana. I didn’t know what this,” he said, making an L-shape with thumb and forefinger, “meant until today.”

How would a man from Everett, Massachusetts, connect with kids from Acadiana, New Orleans and Monroe? Would he be able to recruit against Nick Saban, Jimbo Fisher and the other powerhouses of the conference? Can he rub elbows with big boosters and Louisiana politicians to win their support and backing?

Those answers will come with time. But one thing Kelly has made clear early on in his Tiger tenure—he’s not dipping his toe into the water. He’s diving headfirst into the bayou.

“Our family, we’re going to immerse ourselves into the culture of Louisiana,” Kelly said. “We’re not here to change anything. We’re here to get changed by it, and that’s going to be fun. It will be an experience that we’re looking forward to.”

It might be a steep learning curve for the former Notre Dame head coach, but he’s got plenty of Pelican State presence around the program to help get him acclimated.

He was hired by an athletics director born and raised in Baton Rouge.

The first assistant coach he added to his staff was Frank Wilson, a New Orleans native and St. Augustine alum.

Plus, there’s that talent-laden 2021 class of top-ranked recruits. That group includes guys like Jack Bech, Maason Smith and Malik Nabers, who have already made a name for themselves across the state and are just three of the 61 Louisiana residents currently listed on LSU’s 120-man roster (scholarship and walk-ons).

“Our class is very special,” Bech tells 225. “Everybody’s very close. And not only that, but we have a lot of talent in the class at every position. I think that we could be that base that can be built upon. It’s been really awesome being a part of this and being the foundation for something that I know is going in a very positive (direction) moving forward. I’m excited for it.”

It’s hard not to be optimistic about what’s taking shape at LSU, anchored by a roster loaded with boys from The Boot.

The deeper you dig into Kelly’s resume and the more you analyze the pieces he’s putting together in Baton Rouge, the more the skepticism—warranted or not—begins to slip away.

He comes to LSU as the most accomplished hire in program history, boasting more than 280 career wins as a head coach—the most among active FBS coaches.

He is one of only five active coaches to lead their team to multiple undefeated regular seasons since 2009, and he guided Notre Dame to the College Football Playoffs twice in the past four years.

“I don’t think we could have hired somebody better than Coach Kelly,” Bech says. “I think he’s just what we needed. If you go look at his track record, he’s a very winning coach. He’s brought a lot of stability, accountability, and different things like that to our program. You can already see the different changes that have taken place. And that’s why not only me, but everybody is so excited for this upcoming season.”

If Kelly’s track record isn’t enough to impress you, maybe some of the shiny new weapons he has at his disposal—like Bech—will instill some confidence.

The Lafayette native was a fan favorite before ever stepping foot on campus, thanks in part to his family name. His two uncles—Brett and Blain—both played football for LSU in the ’90s and early 2000s, while his aunt, Brenna, played on LSU’s first soccer team.

Both of his parents are also LSU alums, and by the looks of it, the newest Bech to don the purple and gold already feels right at home. In his first year on campus, Bech led the team with 43 receptions and ranked third with 489 receiving yards. He also snagged three touchdown catches all while alternating between wide receiver and tight end.

“I think people’s expectations for me were very high,” Bech says. “But I always knew I could play. That’s why I came here. I knew I was going to have to put my head down, work real hard and take every opportunity and chance as it comes. And that’s what I did.”

Those opportunities should be even more plentiful this fall for Bech, who will be making the switch full time to wide receiver.

He will have to compete with a plethora of other talented pass catchers, though, most of whom are fellow Louisiana natives.

New Iberia’s own Kayshon Boutte has become a household name across the country after leading the team in receiving each of the past two seasons.

“It doesn’t matter who you pick,” Bech says. “You can put on a blindfold and pick anyone out the receiver room. I think on any given day, anybody in that room can go off. We have so much depth in that room right now, and everybody’s really pushing a lot harder. I think we’re going to be a really elite group, because everybody’s trying to lock themselves in for a starting spot. It’s making our whole group a whole lot stronger, and a whole lot better.”

If Bech is speaking the truth, then that’s a scary sign for opposing defenses.

In a season that saw LSU finish below .500 for the first time since 1999, agree to part ways with its head coach midway through the year, and suffer through a slew of player opt-outs and injuries, the Tigers still finished ranked in the nation’s top 45 in passing yards, passing touchdowns and passes completed.

Add in an offensive-minded head coach whose team ranked No. 20 in points per game a year ago, plus a new offensive coordinator who finished with the No. 13 scoring offense in the country, and you’ve got a good thing brewing in Baton Rouge.

“It became very clear very quickly, that these guys want to win,” new LSU offensive coordinator Mike Denbrock tells 225, recalling his first few weeks with the team. “They’re willing to do whatever it’s going to take to make sure that becomes a reality. That was an incredibly positive first impression from just getting to know the players in the program. I could tell very early on where their hearts and minds were and what their focus was. I think there’s a good core group of football players here in the program that we look forward to hopefully putting in the best position possible so we can have success.”

Just like Boutte, Bech and the rest of the wideouts will spearhead LSU’s offensive attack, Smith, Jaquelin Roy and the deep D-line will be the anchor for the Tiger defense.

Smith arrived at LSU with high expectations, ranking as the top prospect out of Louisiana in 2021 and the No. 20 player overall. The Houma native is also listed as LSU’s 27th best recruit of all time, according to 247Sports.com.

It didn’t take him long to make his mark in Baton Rouge, either.

In just the second game of his young college career, Smith made it into the record books by racking up three sacks to go along with six total tackles—five of which were solo and 3.5 of which were for a loss. The sack tally goes down as the second best single-game showing in school history.

“That was the first game I was really comfortable playing,” Smith tells 225. “I just sat back and let everything happen. I remember (for) the UCLA game, I was very jittery and very anxious to play. There was a lot of pressure on me coming to school as a five star (with) all the accolades. I just worked hard and kept my head down. My expectation for the season was just to get better every game and just be myself, which I did.”

The 6-foot-5, 300-pounder battled a nagging leg injury for part of the season but still wound up playing in nine games, recording 19 tackles and four sacks.

Smith, who is the first player in LSU history to wear No. 0, says the four-game injury has made him even hungrier heading in 2022.

He’s used the offseason to get bigger, faster, and stronger and is ready to change the trajectory of the LSU football program.

“I really feel like Coach Kelly has a plan, and the guys are buying into that plan,” says Smith, who was quick to credit his predecessors before looking too far into the future. “Those older dudes, they’ve put in the same type of work (we have). As a whole class, I think we’ll be the people to help take our team back to where we want to be. We have a real solid group, and I think with a year under all of us getting to know the game and really buying in and being in the college weight room—I think this year will be even better for us and (even better) the year after that. I think we’re going to shock the world. I really feel that.”

That’s another theme that seems to be recurring with this unit: Don’t call it a rebuilding year. It’s a reloading year. 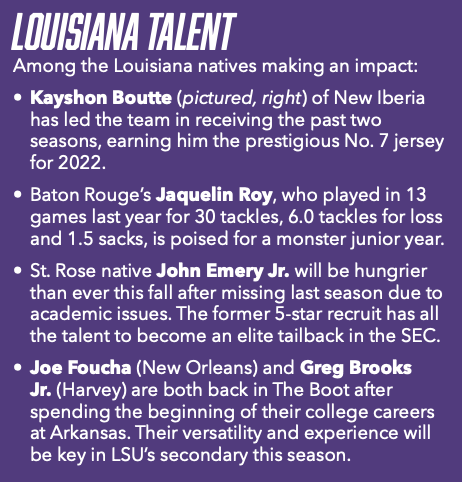 The Tigers feel they have enough talent to compete again right away, and even if there are more doubters than believers, good. Smith may have said it best when he posed a series of questions:

Did anyone really expect LSU to win a national championship in 2019? Did anyone predict Joe Burrow would win the Heisman Trophy that year? Did anyone foresee Ja’Marr Chase and Justin Jefferson setting record after record on the way to an undefeated season?

Tiger fans will continue to celebrate those magical moments forever. But for the first time since that season came to a close, you can feel Louisiana itching to get back to its winning ways.

And there is one more quirk Kelly should know about his new home state: Whether you’re from here or not, if you love it, it’ll love you tenfold right back. Especially if you’re winning.