It started with a T-shirt.

In 2014, Kenny Ricard was running in the Louisiana Half Marathon when something caught his eye. A T-shirt worn by a passing runner read “Black Men Run.”

“It got my attention because he and I were the only African American men I could see out there that day,” Ricard recalls. “I sped up to ask him about it, and he pointed to the website on the shirt and told me to look it up.”

The man sped off, and Ricard never caught his name, nor saw him again.

But when Ricard got home later that day, he discovered Black Men Run was an organization that promotes running as a way to improve Black men’s health. The nonprofit has more than 50 national and international chapters and is focused on reducing rates of heart disease and stroke among Black males, which are statistically higher than the rates of their white counterparts. Ricard was immediately motivated to start a Baton Rouge chapter, which celebrated its seventh anniversary earlier this year.

The local organization has about 200 members, whose ages range from 19 to 67. The only requirement, Ricard says, is that members post about their completed workouts at least every 45 days on the group’s private Facebook page.

A core group of about 20 meets a few times a week to run at City Park, the LSU Lakes and Southern University. New members of every ability level are welcome to join, Ricard says. 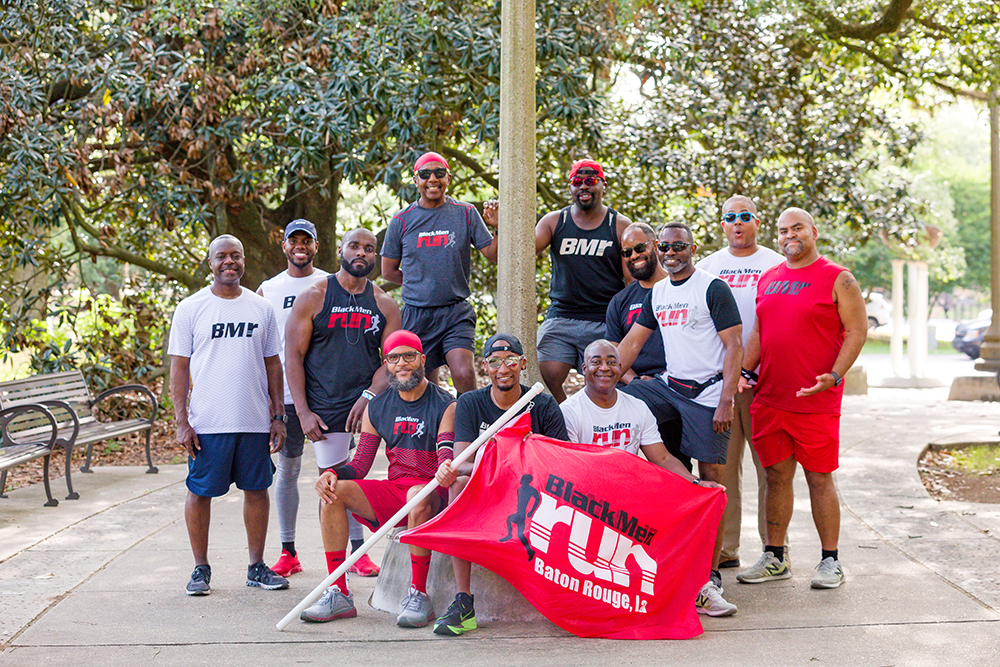 Baton Rouge’s Black Men Run chapter has also signaled the importance of safety for Black runners after the death of 25-year-old Ahmaud Arbery last year. Arbery, a Black man, was jogging in a small town in Georgia when he was confronted by three white men. He was killed in a struggle over a shotgun. Black Men Run was one of scores of organizations nationwide that held Run for Ahmaud tribute runs in 2020.

Ricard, 63, started running 14 years ago after his doctor issued a stern warning during an annual physical.

“He poked me in the stomach and told me I needed to lose weight,” Ricard says. “I was also diabetic and had hypertension.”

Ricard took up running, he says, because a health club membership wasn’t in the budget. Running shoes were.

Ricard’s first runs were slow and frustrating. And they were followed by aches and pains. He kept at it, though, and combined his new exercise regimen with a healthier diet. He also began drinking water throughout the day—Ricard has worked for years at East Baton Rouge Parish Mosquito Abatement—in order to stay hydrated for evening runs.

“Running was so hard at first, I could hardly breathe,” he says. “But I didn’t quit. I lost weight. I had more energy. Eventually, it got easier.”

The Southern University campus became a regular route for Ricard, a Southern alumnus who once played clarinet in its famed marching band, the Human Jukebox. Several months into his new pastime, Ricard realized he had run a full 6 miles through his alma mater’s grounds without stopping. Eventually, he worked his way up to being able to run full marathons. He ran two at age 59.

Exercise is a central part of Ricard’s life, and one he shares with his wife, Kaylin, an avid triathlete. His weekly routine includes five days of running and regular cycling.

“I get nervous if I go more than a couple of days without running,” he says.

Founding Baton Rouge’s Black Men Run chapter has introduced Ricard to new friends in the Capital City—and around the country. When he travels, he makes a point of reaching out to local chapters. Members have invited him on runs and to social events, or simply dropped off complimentary water and shared route information.

“Our motto is ‘No man left behind,’” Ricard says. “It’s a great thing, and a great brotherhood, and I know that we have actually saved some lives.” blackmenrun.com