On July 28, 2019, a crowd of about 200 at Mid City Ballroom watched as performance artists depicted the challenges of living with mental health issues.

One was aerialist Jamie Ray.

Performing with her partner, Isaac Wells, Ray revealed through dance and acrobatics the whiplash of emotions caused by bipolar disorder. Her choreographed movements captured what it was like to feel the extreme highs and the violent, agitated lows associated with the condition, she says.

“I have been that person before in the relationship,” Ray says. “For me, it was therapeutic, and an important story to tell. Mental health is something that we should be able to talk about openly.”

Other artists told equally compelling stories through break dancing, lip-synching, vocal performance, monologues and other forms of live art. The event, created and curated by the local nonprofit You Aren’t Alone Project, gave artists a chance to express their personal experiences with mental health through original work. While COVID-19 has now canceled the live art event two years in a row, organizers hope to stage a return in the spring, with performers again translating their mental health journeys through art.

“There were a lot of people in the crowd who cried, and felt a lot of emotion,” visual artist Jade Brady says. Brady painted an abstract work in real time as the performances unfolded, beginning on a blank canvas. “It was a beautiful event, and a really safe space for people to express themselves.”

Additional paintings by Brady, and works by other visual artists, were on display throughout the space. Each included an artist’s statement about how the work reflected the pain and triumph of their personal journeys.

Creating safe spaces to talk about mental health issues is the goal of the You Aren’t Alone Project, a grassroots advocacy organization that local advocate Chelsea Borruano launched in 2019. The live event was the cornerstone program of the fledgling nonprofit, but Borruano says she also hopes to hold smaller community meet-ups to promote mental health advocacy. And she is planning a human library project, in which regular people with diverse life experiences and viewpoints share personal stories to an audience of one or more people.

Borruano, 32, created You Aren’t Alone after struggling with her own mental health issues, and finally getting the support she needed. 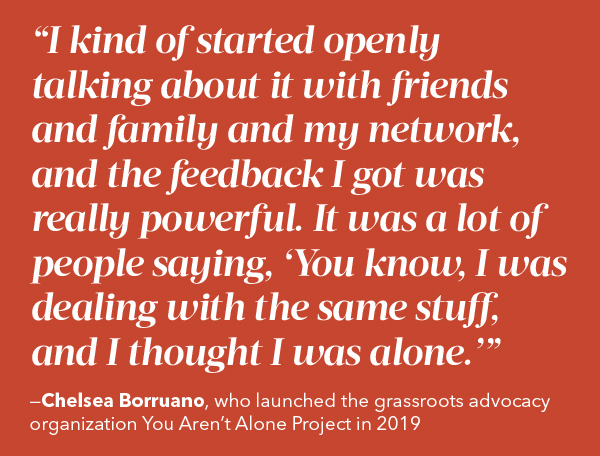 “I kind of started openly talking about it with friends and family and my network, and the feedback I got was really powerful,” Borruano says. “It was a lot of people saying, ‘You know, I was dealing with the same stuff, and I thought I was alone.’”

In the ensuing months, Borruano knew she wanted to create an outlet for mental health advocacy. She wasn’t sure exactly what that might look like until she attended a performance by the Baton Rouge dance company Of Moving Colors Productions.

“I thought about how art sends a really powerful message, and wondered what we could do to turn it into something bigger to address mental health,” Borruano says. “And so that’s kind of where the idea came from for a You Aren’t Alone live art event, and really where things started for the project.”

Borruano convened several artists and asked if they would be interested in interpreting anonymous mental health stories that Borruano had begun collecting. The artists liked the idea, but they told Borruano that they wanted to tell their own experiences. Most had dealt with mental health challenges, and producing art had been a natural part of their therapeutic process. In the summer of 2019, the show came together.

By spring 2020, the organization received its nonprofit status. Borruano had also quit her full-time job in communications and begun pursuing an online degree in mental health counseling through NYU. She continues to work on the degree with the goal of becoming a counselor.

The pandemic prevented the second You Aren’t Alone live art performance from taking place in 2020. The event was scheduled to return this October at Gallery 14. But our region’s sharp rise in COVID-19 cases prompted the organization to move it to April 2022, Borruano says.

The delay will no doubt be a disappointment to both artists and spectators, many of whom have felt the loneliness of the pandemic acutely.

“There was so much isolation in 2020,” Borruano says. “And there are a lot of people still feeling that.”

But artists interested in contributing and participating in next spring’s event are encouraged to submit their ideas to the organization.

Find out more information at youarentaloneproject.com and stay tuned to its Facebook page for updates and resources.