There’s something about outdoor sculpture that anchors a city’s identity, and in Baton Rouge, powerful works around town point to a diverse heritage. You might not know it, but the Red Stick is awash in pieces created by a range of artists, including 20th century masters, renowned contemporary artists and aspiring students.

“Public art is a reflection of who we are as a community,” says Arts Council of Greater Baton Rouge president and CEO Renee Chatelain. “Baton Rouge is a culturally rich place with an interesting relationship to sculpture. We have some significant pieces that help tell our story.”

With social distancing and the urge to get out of the house prompting us to continue to enjoy wide open spaces, it’s a great time to learn a thing or two about sculpture in the Capital City.

The LSU Sculpture Park feels like a secret garden tucked just off the Quad behind the College of Art and Design. It’s an outdoor gallery where student projects invite passers-by to stop, reflect and connect. The works are made by students every fall in LSU art professor Malcolm McClay’s intermediate sculpture class, and they are intended to depict each student’s personal narrative. Also in the park is the bright yellow “Msssspp Runoff” by New York sculptor Nari Ward, who gave the piece to LSU after serving as an artist-in-resident during the 2013-2014 school year.

Sculptor Frank Hayden was a Southern University distinguished professor and one of America’s best-known modern sculptors of the 20th century. After growing up in a Memphis housing project, he studied under the Croatian sculptor Ivan Mestrovic at the University of Notre Dame. Hayden joined the Southern faculty in 1962, teaching and creating until his untimely death in 1988. His “Red Stick,” overlooking the Mississippi River on Scott’s Bluff, is an ode, of course, to the actual red stick that gives Baton Rouge its name. Hayden’s “Lift Every Voice,” in front of the Southern student union, is a memorial to two students shot and killed by law enforcement during a 1960s campus protest over the lack of funding for black colleges and universities.

Created in 1996, this memorial to MLK symbolizes the slain civil rights leader’s historic contributions through opposing yet complementary colors on the color wheel: orange and blue. The monument rises out of the plaza as a monolith, inviting crowds to gather around it. The two colors are arranged in interlocking pieces, showing their reliance on one another. The work faces both north and south, pointing to two halves of the same city.

Another of Hayden’s works is the 1979 bronze tribute to Revolutionary War figure Oliver Pollock, then-Louisiana Governor Bernardo de Galvez’s aide-de-camp. A portrait head of Pollock sits on one side of the plaza while a relief wall and fountain frames the other side. Owing to the significance of Hayden’s body of work, the Louisiana Art & Science Museum recently announced “Frank Hayden: Lift Every Voice,” an exhibit of the sculptor’s works and studies that will be on display at the museum until December.

Reflective and interactive, this contemporary sculpture overlooking the Mississippi River was a gift from the Rotary Club of Baton Rouge to the city last year. Visitors can touch it, see it from a distance when it lights up at night and catches sunlight during the day, and also hear it when sensors from the river trigger different pieces of music to play.

Dale Chihuly’s vibrant glass sculptures are well known throughout the world, and one installation sits on the second floor teaching terrace of the LSU Medical Education and Innovation Center. On loan from the Baton Rouge Area Foundation, the piece is an anchor component in a meditation garden where medical residents can pause and reflect on their commitment to their work. 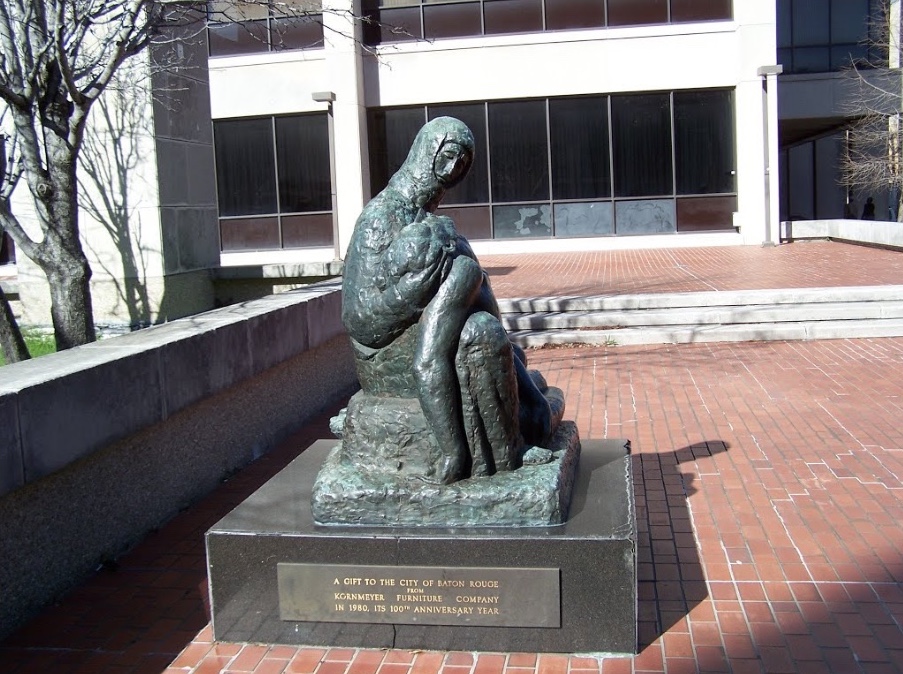 Baton Rouge is also home to the second largest collection of works by Ivan Mestrovic, the Croatian sculptor under whom Frank Hayden studied at Notre Dame. While most of his works are housed at the LASM, one usually seen on the River Center Plaza is the stunning “Pieta.” It reflects the religious undertones of much of Mestrovic’s work—an influence Hayden also shared. The work has been temporarily moved to storage to accommodate renovations of the River Center Theatre.

This article was originally published in the June 2020 issue of 225 Magazine.