Chris Yandle will be the first to tell you parenting doesn’t come with a handbook. But he’s written his own.

Instead of sprawling pages of tips, it’s a hodgepodge of multicolored sticky notes with Sharpie scribblings of affirmations, jokes and advice. He sticks them in his children’s lunch boxes, backpacks and binders to brighten their days. 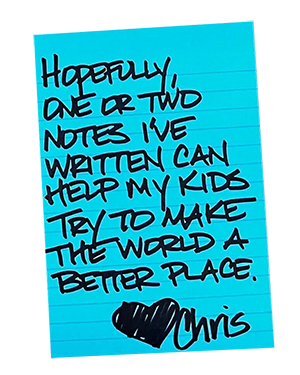 Though this may seem like a collection of scrap paper rather than a parenting guide, Yandle has two important tips for moms and dads: Be present, and listen.

The lunch notes started as a way to help Yandle’s oldest child as she navigated one of life’s most daunting challenges: middle school. Due to his career, Yandle and his family had moved from state to state before finally returning to Louisiana in 2016. With each move, Addison had to adjust to new friends and new schools. When she started struggling with anxiety, Yandle couldn’t help but feel some guilt.

One day, while putting together Addison’s lunch, Yandle scribbled a thoughtful note on a Ziploc bag.

“It was more or less a reminder to her that I understand what you’re going through and while people may not be nice to you, you can still be nice to them,” he says. “Honestly, I thought (the note-writing routine) was only going to be like a week or two, because I thought I was going to forget one day and it was going to be a passing fad. A couple of weeks into it, she said she liked them and wanted me to keep doing them.”

This single note turned into a collection of over 900 more. That number continues to grow—and is even larger now since Yandle began writing for his son, Jackson.

What started as a sweet, fatherly act turned into a heartwarming story that has been picked up by national television talk shows and news sites like The Kelly Clarkson Show, People magazine and the Today show, to name a few.

He now posts all of his notes to his children on his social media in the hopes of inspiring others. He’s even taken the first few hundred of his notes to Addison and turned it into a book called Lucky Enough, available on Amazon and at retailers like Target and Barnes & Noble.

Though coming up with weekly quotes to write for each child can be a challenge, Yandle says the act has strengthened his relationship with his children.

Though the national attention has been rewarding, Yandle says he’s not doing this for fame or money. He’s trying to make a difference in the lives of his children, one note at a time.

“Ultimately, I hope it’s a blueprint for them,” he says. “Whenever the day is that I’m gone, they can follow it. And maybe that’ll help them make decisions and navigate the adult world. ” bychrisyandle.com