From time to time, it occurs to Fleur de Lis owner Pam Rushing that some slight update, some minor tweak, might enhance the experience of eating at her family’s iconic pizzeria. 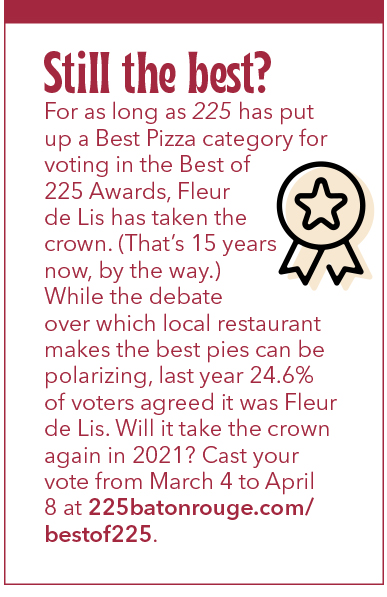 “But there’s no way I could get away with it,” Rushing says. “The customers are like, ‘No, no, no! You can’t change anything.’”

The short list of pizza toppings is illuminated on a moveable-type bar sign and printed on aging menus. Large pizzas come in rectangular form, a vestige of the cookie sheets once used by Rushing’s grandmother to bake her large pies. The jukebox eschews new songs in favor of Motown and classic country. Cash and checks are the only acceptable forms of payment, supported by Rushing’s installation of an ATM rather than a credit card machine.

“I worried it was a little too ‘Pepto-Bismol’ when they put it on. But I knew with time, it would fade to look like it always did,” Rushing says. “And it has.”

The wait for a table, in normal times, is a good hour-and-a-half on weekends. Nowadays, the signature take-out window sees a steady flow of to-go orders.

Rushing’s grandparents bought Fleur de Lis in 1946 when it was a cocktail lounge. Soon after, her grandmother made small anchovy pizzas to inspire thirst among the barflies.

It inspired hunger, too, and the bar was eventually joined by a full-blown pizza operation. Rushing’s grandmother sourced her dough and sauce recipes from Italy, neither of which has changed in 75 years. The “Round the World,” topped with anchovies, Italian sausage, mushrooms, pepperoni, salami and onions, is the most popular menu item, although most diners forego the one ingredient that started it all.

Rushing’s late parents, Wayne and Holly Powell, and late sister, Jo Powell, ran Fleur de Lis for several years until their collective failing health brought Rushing, a nurse, home from Houston to learn the family business. She and her husband Murray have run things since the early ’90s.

“Everything I do here, I do for the memory of my parents and sister,” Rushing says. “It’s another reason we keep things the same.”

Hover over to see which restaurants opened this year: