It’s snoball season, and almost anyone in Louisiana would agree that one of the best parts of summer is a styrofoam cup filled with crushed ice and drenched with sweet syrup. Baton Rouge’s newest mobile stand, Aliye Belle’s Snowballs, is changing the snoball game with specialty flavors and layered snoballs—just in time for the sizzling temps.

Leola’s Cafe owners Corey and Leann Ringe opened the snoball stand right across the parking lot from their restaurant. Customers can choose from more than 20 flavors, including Dill Pickle and Orchid Vanilla, which snowball chef Meagan Orillion insisted on having in the stand because it was a favorite flavor of Aliye’s, the stand’s namesake. Patrons can also create their own unique snoball by combining flavors. Leann says Peach Mango and Rainbow have been huge hits lately.

While the stand’s desserts may be sweet, the story behind it is even sweeter. 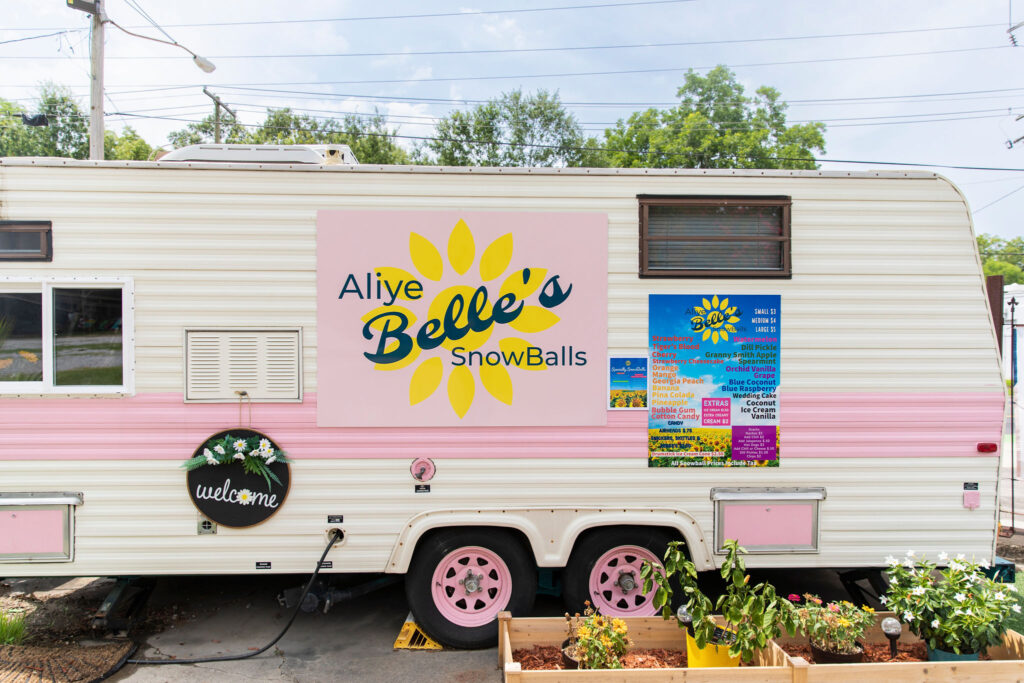 The idea to turn an old camper into a snoball stand came about after the Ringes’ daughter passed in late 2021. Aliye Ringe, the stand’s namesake, loved working with her friends at snoball stands during the summer months. Aliye worked at Leola’s but always wanted to run her own stand. Though she tried to get one off the ground, it didn’t really work out on the first go.

“Aliye previously worked at a snoball stand for five years,” Leann says. “We kind of felt like she always wanted to still be doing that. … In the spring, we still had that corner of the parking lot, and we thought: Why not try again for her?”

Leann and Corey decided they needed to make her dream a reality. The couple began scouring the internet to find the perfect trailer to make into Aliye’s dream stand.

“We wanted something unique and different,” Leann says. “My husband found the camper in Alabama, and we spent an entire day driving to Alabama and back. I think it’s just the perfect fit.”

After transforming the camper from a livable space to one suited for snoball making, they got to work decorating it with sunflowers—Aliye’s favorite flower. Leann says you’ll find sunflowers throughout Leola’s Cafe, but she wanted the stand to be “sunflower everything” in memory of Aliye.

To ensure every snowball was perfect, the couple purchased a SnoWizard machine from New Orleans. They also enlisted the help of Aliye’s best friend Meagan Orillion to run the stand, along with Aliye’s siblings Brayden Ringe and Bralyn Davis. Each employee has previously held a snoball stand job, which means Aliye Belle’s staff has a combined 20-plus years of experience and knowledge of what makes the perfect snoball.

Although Leann leaves the snoball making up to the experts, she knows a thing or two about what makes a good snoball.

“You need to have the right shave on the ice,” she says. “You don’t want the ice to be crunchy, but you want it to be firm enough to hold the syrup. For our specialty snoballs, it’s about having good ice, but also having some made-from-scratch ingredients.”

The stand may be small, but Corey and Leann have been working hard to make it the perfect little corner for family outings, dates and hangout sessions. Around the stand you’ll find plenty of comfortable seating and picnic tables to chill with your cool treat. There are even cornhole boards in case you want to engage in a friendly game during your sugar high.

“We want Aliye Belle’s and Leola’s to coexist in the same area,” Leann says. “We will adapt the business to the needs and requests of the community just like we did with Leola’s. … So we want it to be like a destination spot for a sweet treat, but also a place where you can sit and hang out.”

Although the stand has already garnered some attention, the grand opening is set for Saturday, June 25. The stand will be open all day, slinging snoballs for customers. There will also be live music by The Teche Two, as well as a Kendra Scott pop-up selling a curated collection for Aliye at Leola’s Cafe during brunch. A portion of the proceeds will benefit the Louisiana Organ Procurement Agency, because Aliye was a life-saving organ donor.