Every fine dining establishment in town seems to have its own particular draw. Some are known for boisterous bars. Others have built their reputations as the place to entertain a larger group, while a few have built a following on the excellent food alone. When I think of Mansurs, I consider the food, of course. And I have gathered there with friends and family groups large and small. But it’s the intimacy of the place that enthralls me again and again.

No one can accuse Mansurs of being small, but tucked-away tables and quiet niches with banquettes make it a worthy location for a romantic dinner. Add the softly colored decor, cloth tabletops and live pianist, and you have the start of an enchanting evening.

Opening with an aperitif is never a bad idea, and the specialty cocktail list doesn’t disappoint in quantity or uniqueness. But drinking on an empty stomach can kill any party before it begins, so we ordered several appetizers.

Zydeco Mushrooms had tender fungi overflowing with a mildly spiced and heavenly seafood stuffing. This serving of four delighted our palates, and was diminutive enough to feed to your love or pop into your own greedy mouth.

Seldom found on fine dining menus, the Acadiana Egg Rolls had a definitive south Louisiana flair with duck and shrimp. The rolls were sliced for sharing with a crisp, nongreasy wrapper stuffed with a very flavorful filling that far surpassed any takeout egg roll. A bright yellow spicy mustard sauce was wonderful with the meats and crisp cabbage, but the unnaturally red dipping sauce was unimpressive.

We completed our snacking with a Mansurs must: charbroiled oysters. Piquant zest with a lingering heat, loads of butter and a dusting of melted cheese made these bivalves particularly noteworthy.

The Veal Oscar entree looked intriguingly mouthwatering. The veal cutlets were pounded thin and nicely breaded, then topped with a ridiculous pile of lump crab. I found the bearnaise a bit bland, but the luscious brown gravy more than compensated. I’m not sure if the side was mashed potatoes with a boatload of butter or a boatload of butter with a whisper of potato. For me, a tiny portion was plenty. 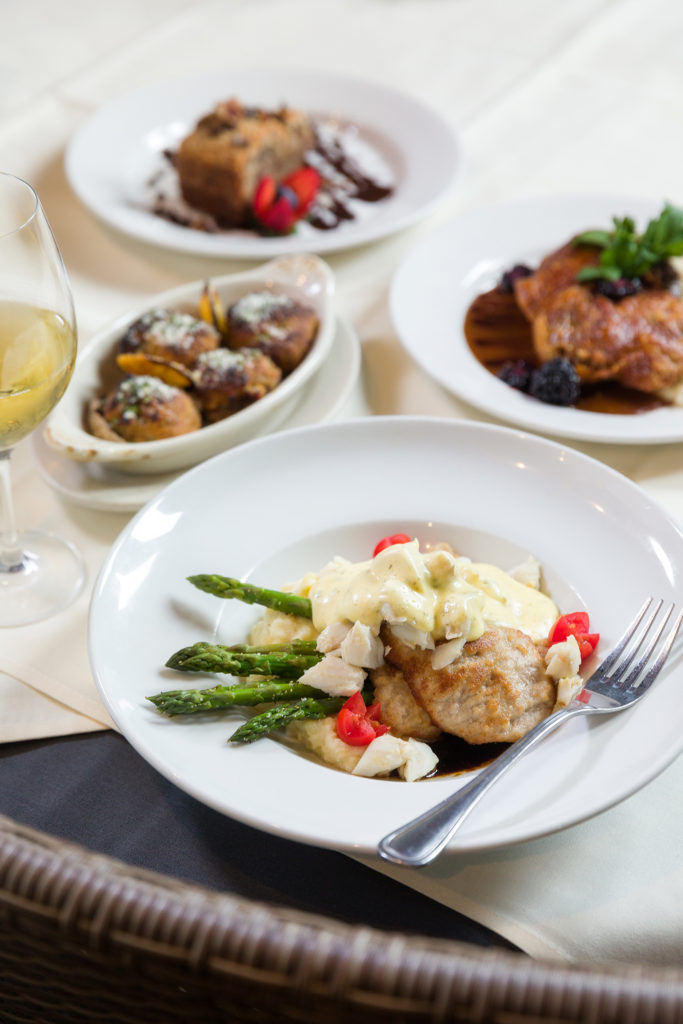 I adore the flavor imparted when food is cooked atop fragrant wood, and Cedar Roasted Redfish did not disappoint in savoriness, juiciness or flakiness. Beneath the large, slightly smokey filet was a simple, delicate risotto that was toothsome and not too heavy with a light sprinkling of cheese. With a caper lemon butter that added tang and richness, this was a supremely satisfying dish.

With the Duck Mansur entree, the sensationally golden-crisp skin first caught my eye. Underneath was a perfectly roasted and juicy boneless duck, tender and mildly seasoned. An accompaniment of Chambord blackberry sauce helped quell the richness of the fatty skin while adding a touch of inky sweetness. With risotto already included with one entree, we substituted it for Creamed Spinach. Pleasing, bright green spinach was plentiful as was—I believe—earthy white pepper. It turned out to be an exceptional substitution.

Though I usually shun bread pudding, I thought Mansurs seemed like the kind of place that would do it well. Its bread pudding was soft and almost, well, pudding-like with a scattering of raisins. The rum butter sauce was a revelation—creamy with an easy sweetness. A final flourish of fresh blueberries added a touch of tartness.

The Bailey’s Cheesecake Chantilly was an overtly sweet slice with plenty of chocolate chips, a topping of chocolate and stuffed with chocolate. It was rather overwhelming and definitely not our favorite. If you possess a sweeter-than-sweet tooth, though, this dessert may suit the bill.

Louisiana Lust lived up to its name. The chocolate chip pecan pie was served warm with chocolate glaze along with added a la mode vanilla ice cream. Not very pie-like, it was more a thick cookie—though this is not a complaint. The included caramel and chocolate sauce added more sugar but enhanced rather than overpowered the dessert.

I’ve never had a bad experience at Mansurs. Brunch, lunch or dinner has always been superb. Staff is attentive, knowledgeable and always friendly. There’s just something in their sauce that makes even an ordinary night out a little something special. Add a special occasion to the menu, and sparks will fly.

THE BASICS: While the Creole restaurant’s roots date back to 1989 on College Drive, Mansurs moved to its current location on Corporate Boulevard in 2003. It has maintained a loyal following for its classy atmosphere, service and much-loved dishes.

WHAT’S A MUST: Charbroiled oysters are a no-brainer, but don’t pass up starters like the Zydeco Mushrooms or Acadiana Egg Rolls. For an entree, try the Duck Mansur, considered a house favorite for its twice-roasted duck topped with decadent Chambord blackberry sauce. And for dessert, save room for the chocolatey Louisiana Lust pecan pie.