THE BASICS: Replacing Omi in late 2021, Cheng’s Restaurant and Bar gave the Essen Lane space an upgrade while offering up traditional Chinese fare that more than makes up for the loss felt by fans of the original restaurant.

WHAT’S A MUST: The Mongolian Beef is a satisfying take on the classic, with tender beef strips and a mildly spicy sauce. The Spicy Garlic Eggplant has a gorgeous purple hue and amazing flavor, but take our advice and order it with a protein like chicken or shrimp to add some textural contrast. And you can’t go wrong with Pork and Vegetable Dumplings and the addictive “signature sauce” to start.

The Chinese restaurant Omi was a hidden gem of the Capital City for much of the 2010s. It was loved for an authentic menu of deeply flavored and spicy dishes as well as sushi and hibachi, all found in a sit-down restaurant setting otherwise rare in a sea of Chinese takeout options.

Omi seemed to survive on loyalty and word of mouth—partially because of its location on a hard-to-reach side street off Essen Lane at I-10. Still, it was the kind of place that would lead people “in the know” to excitedly suggest dishes to try and recommendations that you must get this with a side of that.

The restaurant’s fans, though, couldn’t keep it from closing last summer after the owners retired and the building sold. Fortunately, just a few months later, new owners stepped in to launch Cheng’s Restaurant and Bar. 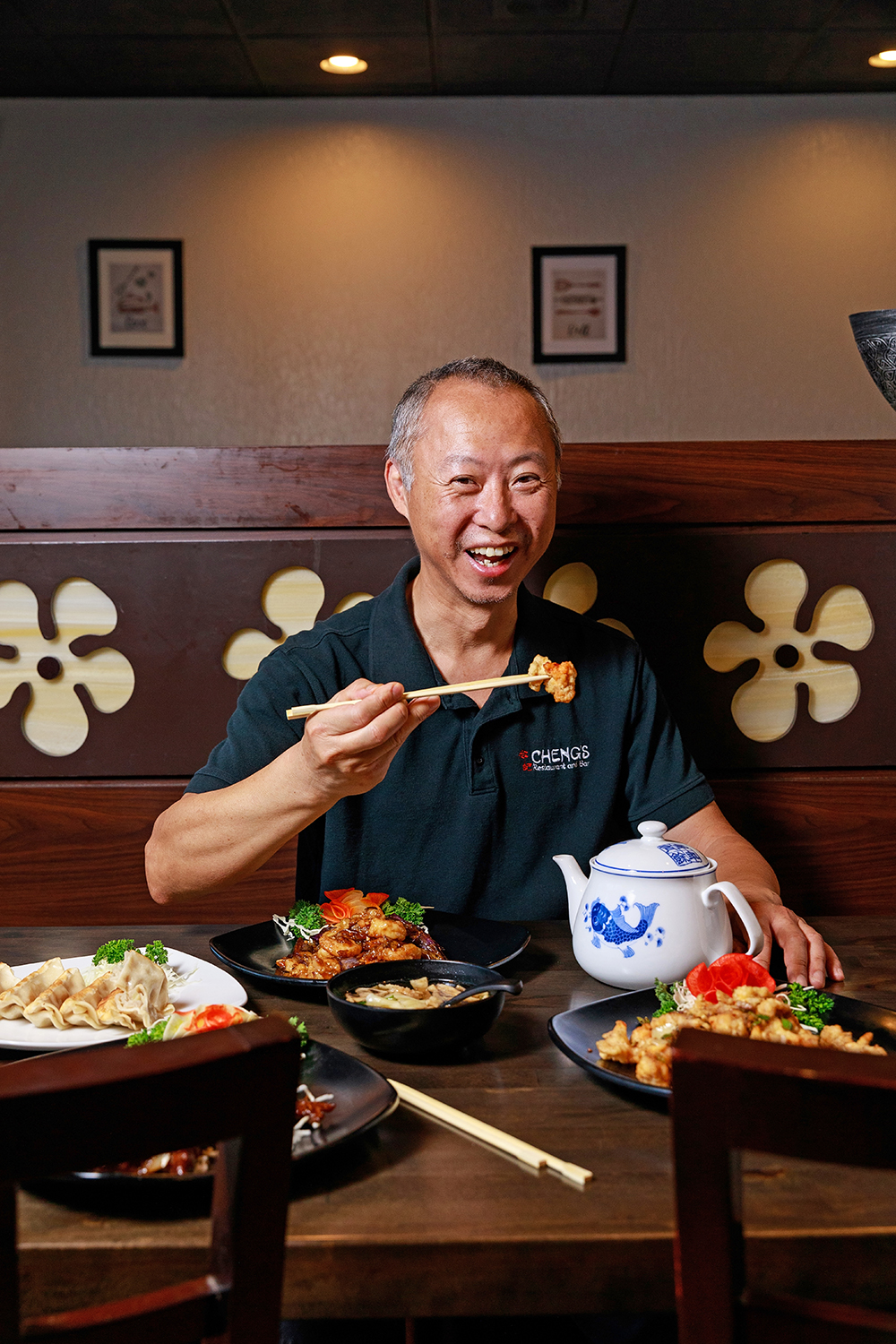 The sushi and hibachi options are gone, with a focus now on traditional Chinese dishes and even a few entrees familiar to the building’s past (the popular ground pork and glass noodles dish Ants Climbing Trees makes an appearance).

The interior was given a fresh coat of paint, an updated lobby and bar and some new seating as well.

I brought along two friends on a Tuesday night, and we were all ready to sample as much as possible. After some sake and beer, we started with the simple pleasures of pan-fried Pork and Vegetable Dumplings. Six dumplings came piping hot and with a sizable dipping bowl of “signature sauce.” It was the color and consistency of soy sauce, but sweet and savory rather than salty—a perfect counterpoint to the ample pork and veggie stuffing in the dumplings. 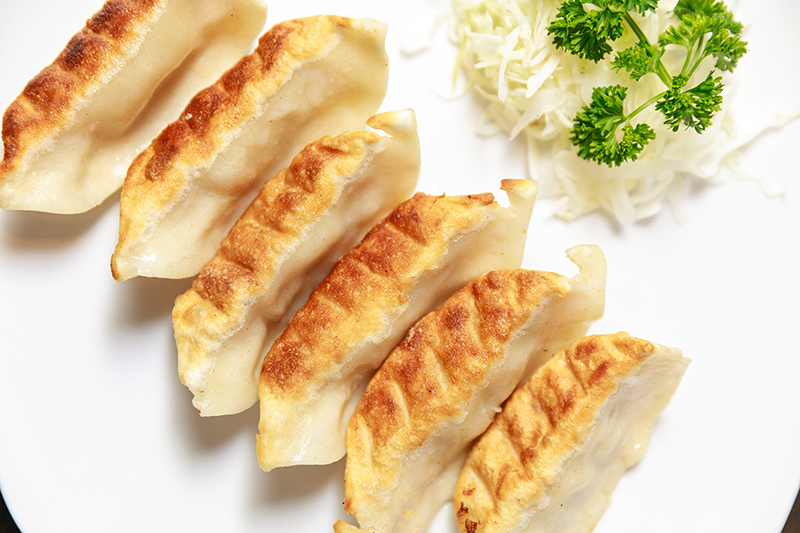 Curious and maybe a little too influenced by foodie accounts on TikTok, I also ordered the Scallion Pancakes. The spiraling process of making these thin-fried pancakes results in a flaky exterior and green scallions swirled throughout the chewy interior. Cheng’s version provided a salty, crispy snack before our entrees arrived, though the scallions were scarce.

We also ordered a bowl of Wonton Soup that was loaded with mushrooms, scallions, spinach and three plump seafood wontons. But the broth was much too salty for us to get past a few slurps.

We each ordered an entree, complemented with a choice of steamed white rice, brown rice or fried rice. Of note was the beautiful presentation of garnishes on each plate—thin slices of radish arranged in a rose-like shape that was almost too pretty to touch. 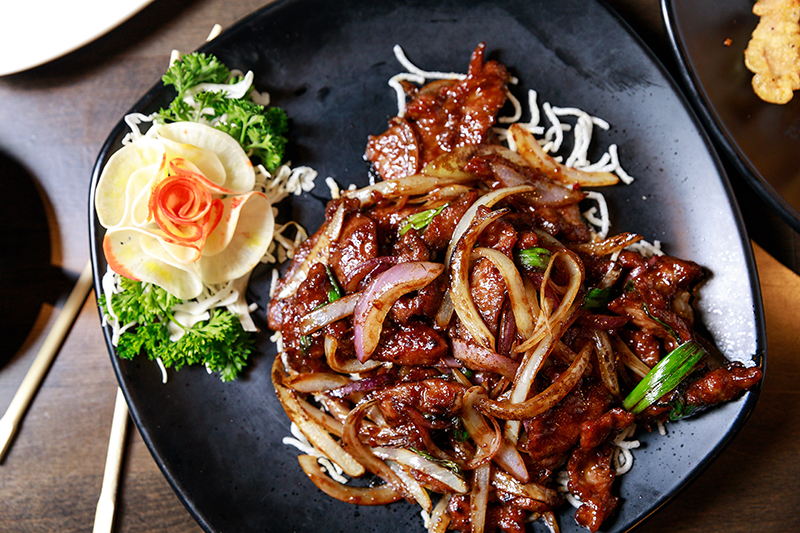 Our first entree was the Mongolian Beef, which one of my dining partners said had been recommended by several friends. The thinly sliced and tender beef was paired with stir-fried onions and plated over crispy rice noodles, offering some nice crunch. The sauce was mildly spicy and a little sweet, though thankfully not as sweet as other versions I’ve had.

Second came the Five Spice Chicken, which initially looked like a mound of popcorn chicken. Hidden underneath, though, were sauteed bits of spicy green peppers and onions that had us all sniffing and wiping our noses from the lingering heat. The chicken was addictive for its small size and breaded texture, plus visible flecks of spices in the batter, but was slightly dry on its own. We all agreed some sort of sauce on the side would help, and that had us reaching for the leftover “signature sauce” from the dumplings. An ingenious fix! 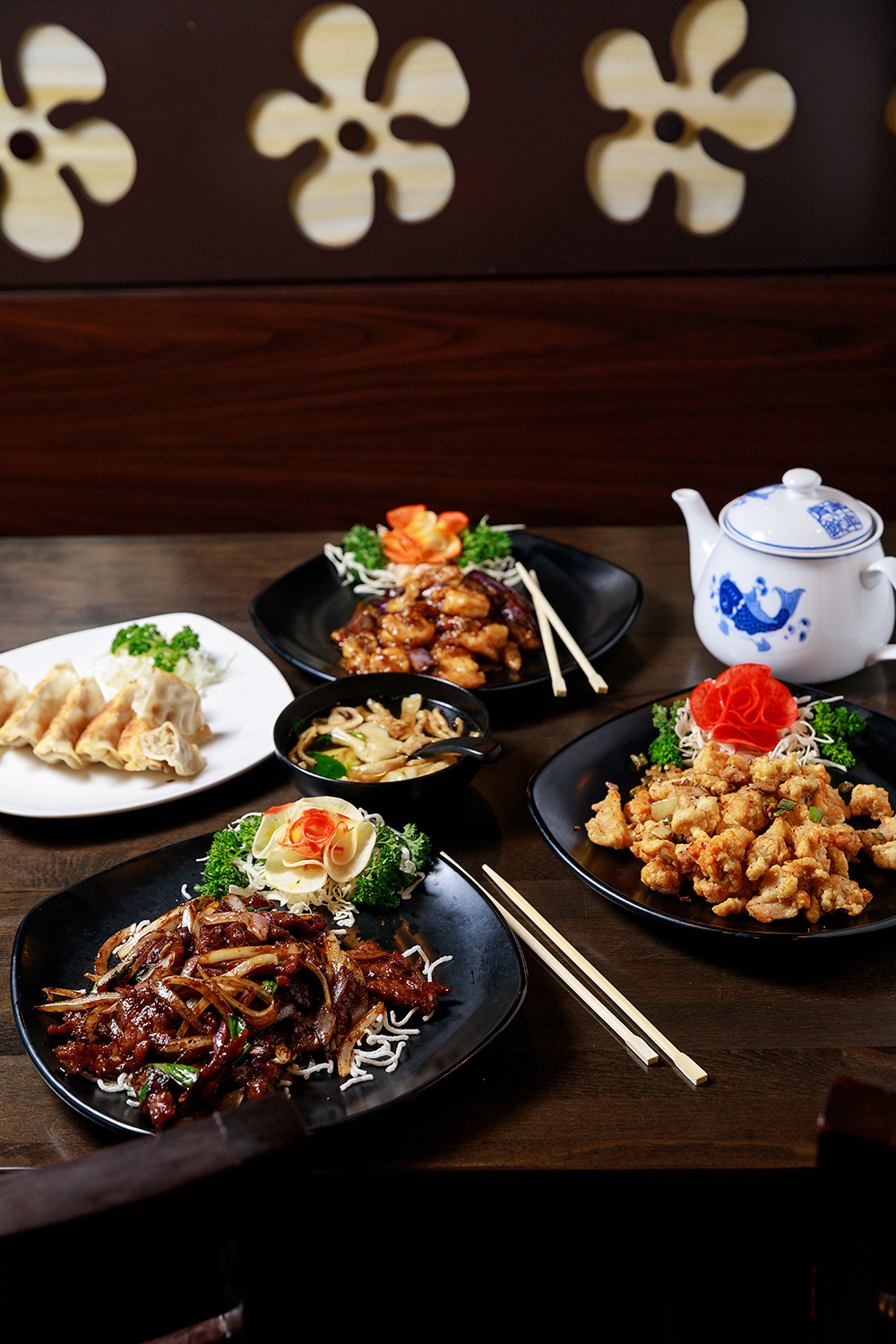 Last of the entrees was the Spicy Garlic Eggplant. We were all amazed at how the well-cooked slices of Japanese eggplant still retained their bright purple color. The eggplant had been sauteed in a rich, glossy, garlicky sauce to the point of caramelization, and a sprinkling of scallions added a fresh punch.

When ordering, our server mentioned that the eggplant could be paired with a protein, such as chicken, pork or shrimp. We opted to keep this a vegetarian dish amidst the other meat entrees. In hindsight, though, it was a good suggestion. The eggplant was the tastiest entree, but it needed something else to add a contrasting texture to its softness. 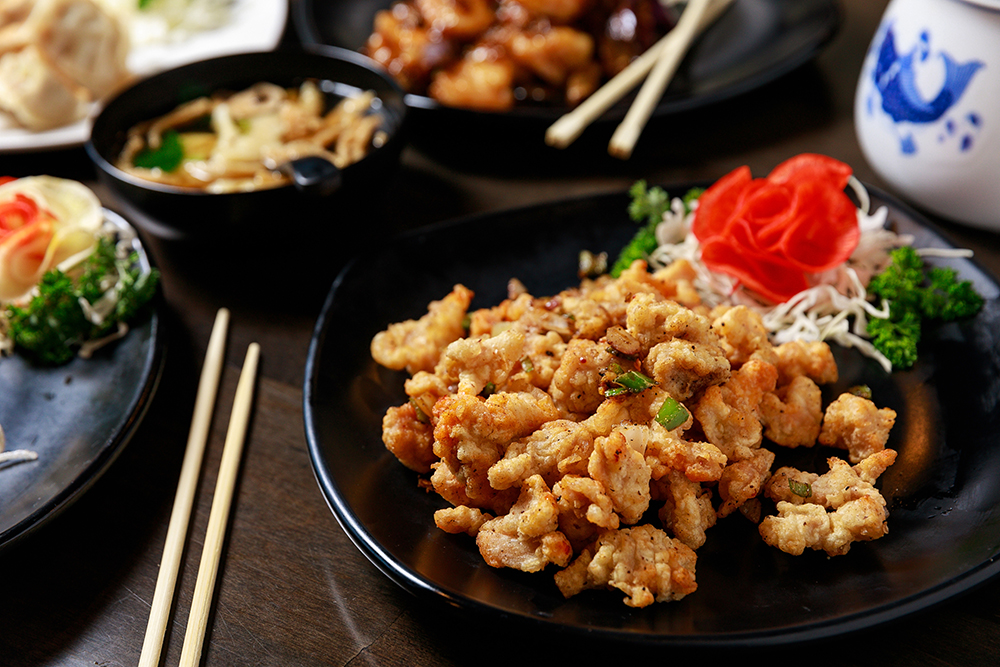 And that sparked an ongoing conversation we had throughout the meal: While we all thought Cheng’s offered up some of the best Chinese food we’ve had in a while, it may take more than one trip to work your way through the menu and find the dishes that truly make your tastebuds sing.

If you’re planning to try Cheng’s—and you should—get some recommendations from people who have been. And then maybe you’ll develop your own favorites that you’ll pass on to friends when you tell them—and you will—how this is a must-try restaurant.

From the several occupied tables of families, friends and couples we saw on what could have otherwise been a quiet Tuesday night at Cheng’s, it looks like those in the know are already becoming loyal fans of Baton Rouge’s newest hidden gem. 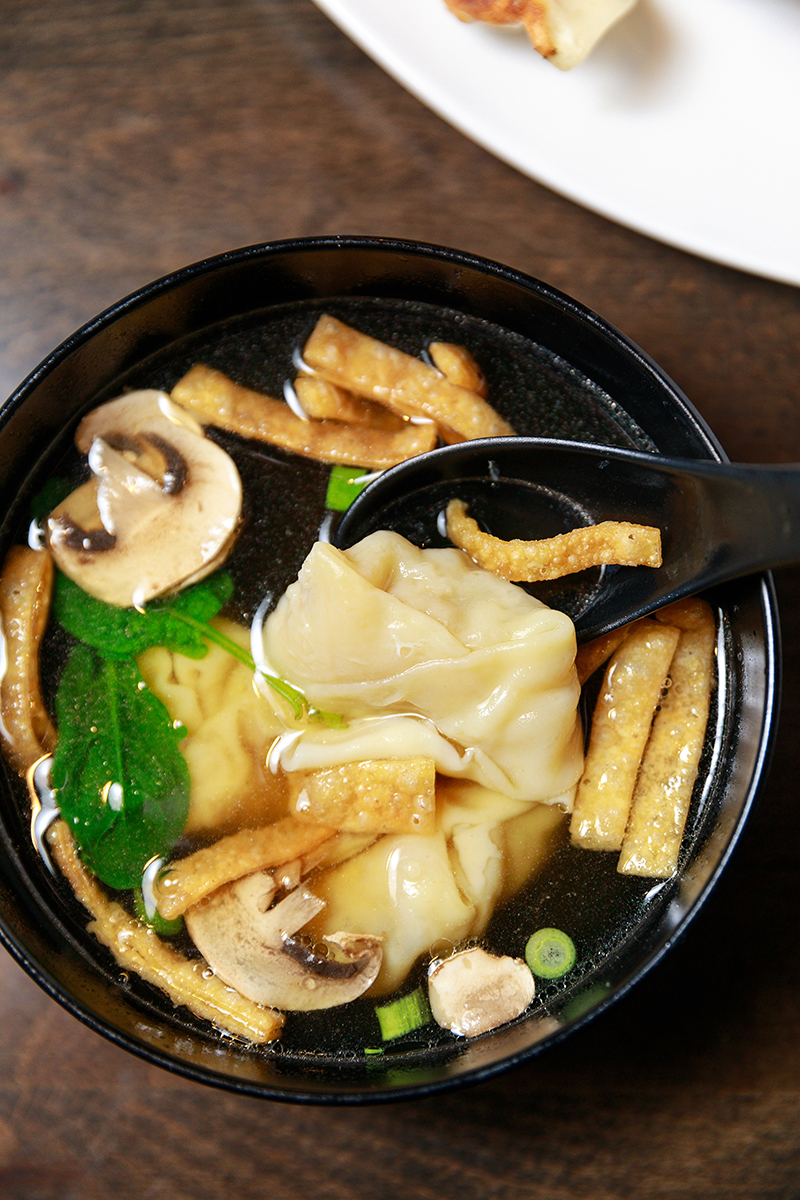 Benjamin Leger previously served as managing editor for 225 and was the editor of its Taste section from 2012 to 2021, editing, writing and steering the direction of its food coverage in print and online. He is passionate about all things food and food journalism, and has written about the greater Baton Rouge area’s cuisine and culture for nearly
two decades.