THE BASICS: City Group Hospitality—the team behind City Pork, the revamped Beausoleil and others—took over the former Bistro Byronz location on Government Street, gave it an interior overhaul and converted it into a neighborhood diner serving breakfast, lunch and dinner. A dessert bar offers slices of weekly cakes and pies, while behind the building lies a sneaky little bar stirring up inventive cocktails with retro vibes.

WHAT’S A MUST: The croffles are a signature item, marrying croissant dough and a waffle, served in sweet and savory forms. Seafood Stuffed Eggplant Balls or the Fried Green Tomatoes are easy shareable items. For a breakfast or brunch outing, try the Chicken Fried Biscuit with its tender and crunchy chicken and rich country gravy. And pancakes are a must for any sweet tooth.

The brunch ritual is very much alive and well in Baton Rouge. And at a place like Spoke & Hub, with its prime location on Government Street, elevated diner vibes and Breakfast All Day section of the menu, you can bet you’ll find a big brunch crowd on any given weekend.

This concept from the City Group Hospitality crew opened at the beginning of the year in the former Bistro Byronz spot in Mid City. Its owners were betting that a neighborhood diner with a cycling theme would be a success in the increasingly bikeable Mid City.

So far, that bet seems to be right. 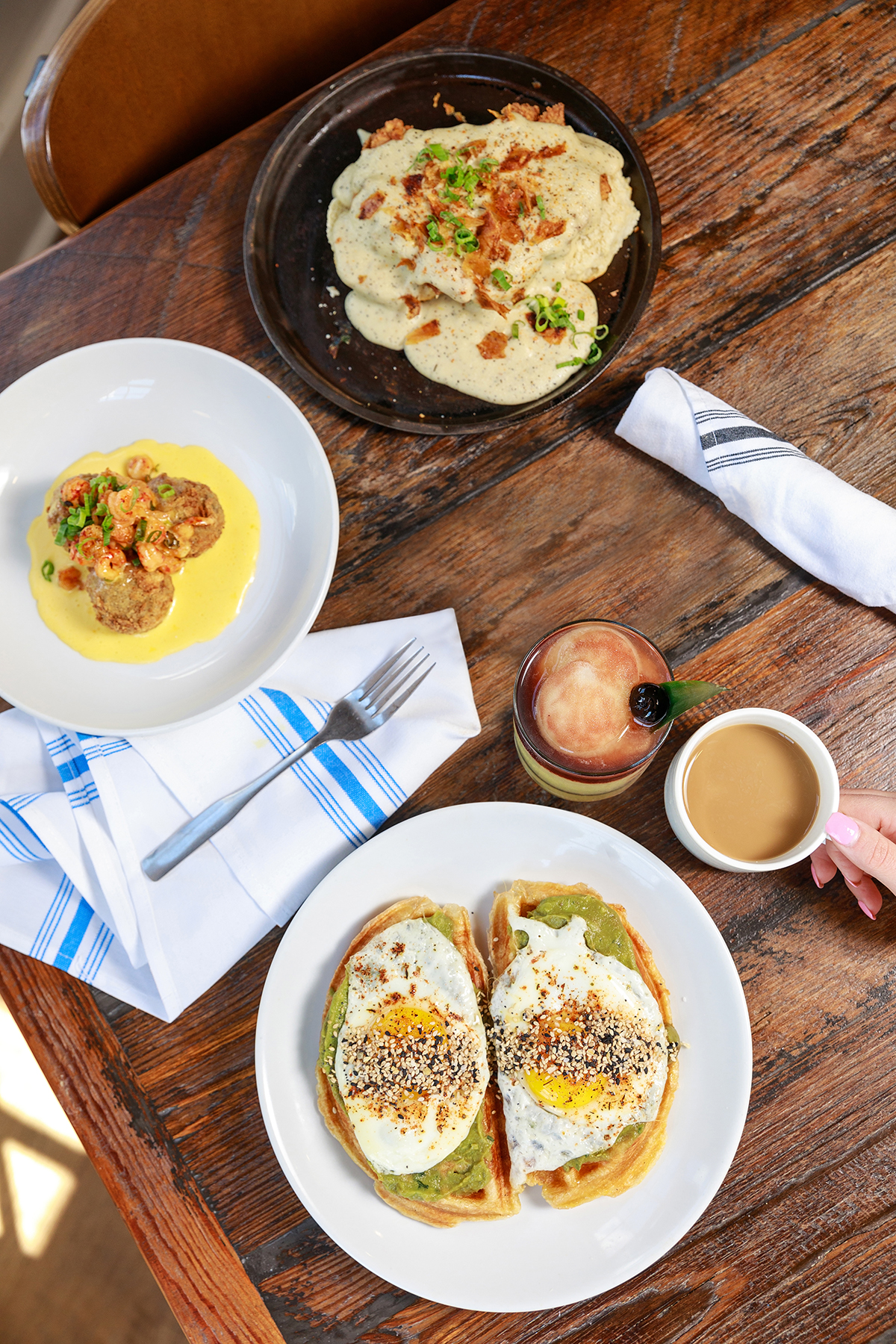 I’ve stopped in for dinner twice now, and while I didn’t have to wait for a table, the restaurant was always busy. 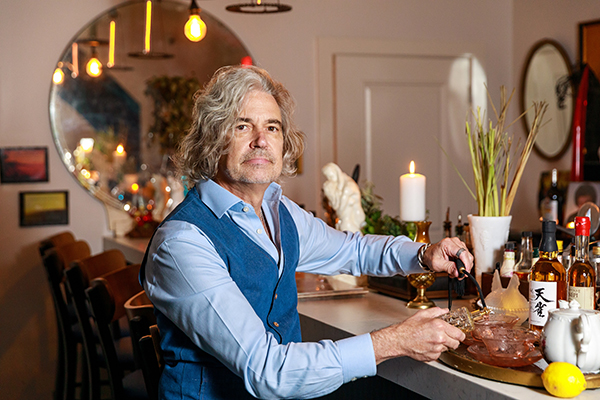 The kitchen serves a straightforward breakfast, lunch and dinner with a few twists—plus the Brakes Bar, a serious cocktail-focused speakeasy-style bar out back.

Knowing how much of a group event brunch can be at any popular restaurant, I didn’t want to risk it for an 11 a.m. seating. I made reservations the day before, and on a sunny Saturday morning, we were quickly ushered past the bustling but small waiting area to our table.

The crowd was boisterous, and my table needed to meet the vibe, so brunch cocktails were in order.

The drinks menu is varied, with specialty cocktails, Spoke & Hub’s takes on mimosas and bloody marys, and even boozy milkshakes and beer floats.

To start us off, we opted for a shareable appetizer. We were a small group, and our server suggested the Seafood Stuffed Eggplant Balls.

Three compact eggplant balls were flecked with bits of crawfish that imparted a strong and tasty crawfish flavor throughout the stuffing. There were more crawfish tails piled on top, along with sauteed green onions that added a nice touch. Everything was sitting in a hollandaise sauce that was creamy and buttery but could have used more seasoning.

The dish was just enough to give us something to munch on while we sipped our cocktails and waited on the mains.

Eager to try something from the Breakfast All Day portion of the menu, my partner ordered the Chicken Fried Biscuit.

One flaky and subtly sweet buttermilk biscuit was split open to cradle a large and tender boneless fried chicken thigh. The breading on the chicken was crispy and perfectly seasoned.

The other half of the plate was occupied by a thick, cream-colored country-style gravy speckled with black pepper and topped with crumbles of fried chicken skins.

The chicken skins added a unique and salty crunch, and the gravy was excellent for spooning over the chicken and biscuit.

My entree of choice—the Savory Croffle—wasn’t technically on the breakfast menu, but was definitely breakfast/brunch approved. 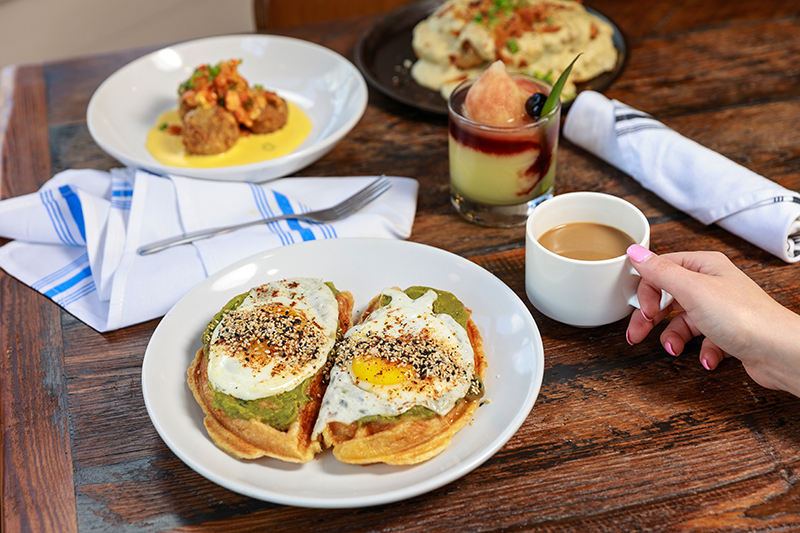 I wanted to see how Spoke & Hub handled the trendy avocado toast that’s become a favorite of the brunch-loving millennial crowd. This also gave me the opportunity to try the restaurant’s unique take on a waffle.

Made with croissant dough that’s been pressed in a waffle iron, the “croffle” forms the base of Spoke & Hub’s avocado toast, as well as a couple of other croffle-based menu items. (The menu also noted that you could turn any sandwich into a croffle sandwich, and why not?)

Two half-moon-shaped croffles came smeared with an avocado mash, two sunnyside up eggs on top and a sprinkling of red pepper and everything-but-the-bagel seasoning.

The avocado was mixed with its own seasoning as well, making for an overall spicy but tasty dish. My only complaint here was that the croffle may have sat in the kitchen too long waiting on its other components, because it was soft and not as crispy as I would have liked. Its croissant origins were apparent, though, in the buttery and chewy layers of dough when pulled apart. 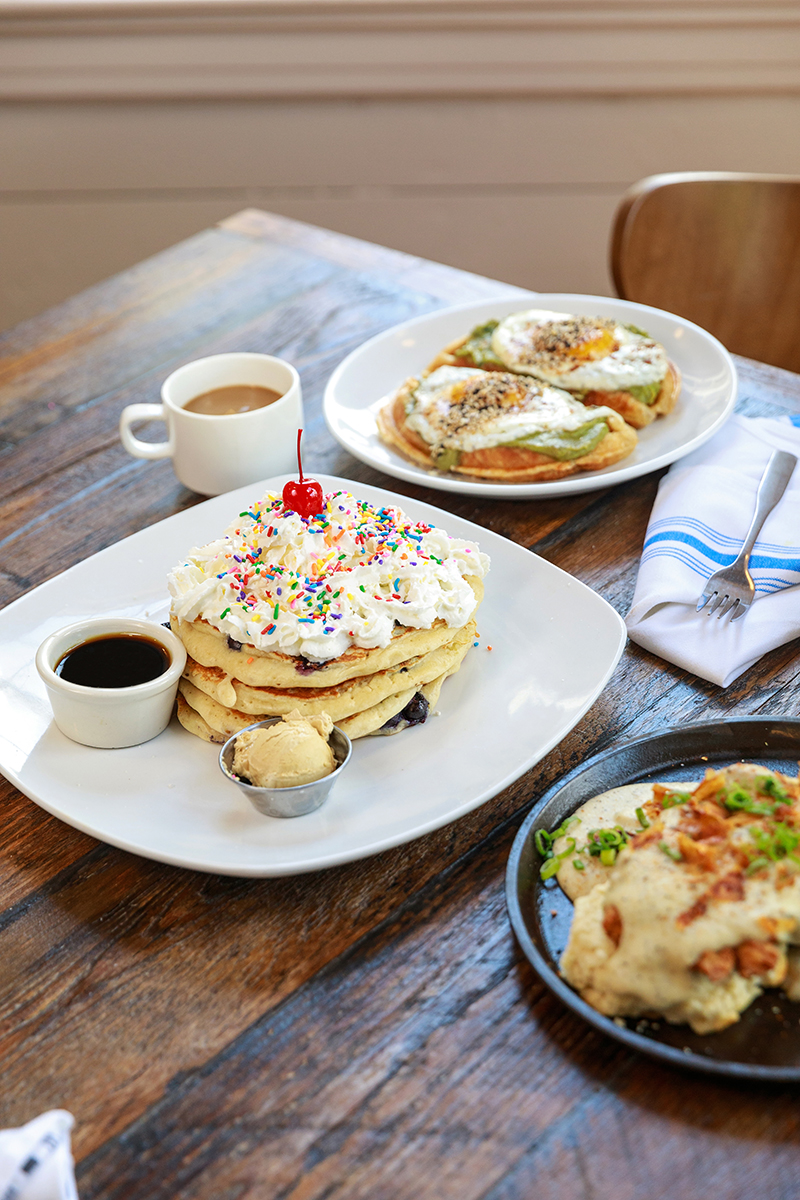 Rounding out our meal, we opted for a moment of pure sugary indulgence in the form of pancakes. After seeing the colorful sprinkles and whipped cream topping on a pancake order go by our table, it just seemed too good to pass up.

Thankfully, Spoke & Hub does it DIY style, meaning you can pile up as many or as few as you want and pick the flavor: chocolate chip, blueberry, banana, pecan or strawberry.

We went with one blueberry pancake, and it was a sweet and simple end to our meal, paired with a sweet whipped butter for added indulgence.

Our server was attentive and the food came out quickly, and my group left pleasantly surprised with how Spoke & Hub seems to hit the mark in a variety of ways. While it was a hot late summer day on my visit, the front porch and side patio seem primed for leisurely fall weekends of warm croffles and bubbly mimosas.

Between lunch and dinner, a hip and hidden cocktail bar and an impressive brunch offering, Spoke & Hub seems like it can do it all.