Editor’s note: This article has been updated since its original publication to correct a caption error for the photo of the Crab Toast, which was mislabeled as the salmon.

THE BASICS: Much has changed in the fine dining world since Jubans first opened 40 years ago. So when the renovated and rebranded restaurant made its modern debut this spring, diners were pleased to find a space and menu that’s just as nostalgic as it is forward-thinking. A stunning design concocted by X Design and DNA Workshop is outfitted with brass and stone finishes and custom wallpaper and artwork, with nods to Baton Rouge culture and style throughout. Since its April reopening, it’s quickly reclaimed its reputation as a local icon.

WHAT’S A MUST: Chef Chris Motto—formerly the longtime chef at Mansurs on the Boulevard and a fan favorite on Hell’s Kitchen—leads the kitchen, putting his own spin on the Jubans classics. The Hallelujah Crab is famous enough locally that the restaurant named one of its bar rooms after it. For a lighter take on this dish, try the Crab Toast, which showcases fried, crunchy soft shell crab on warm French bread. The Louisiana Two Birds is a true standout, with chicken-fried quail breast and a boudin-stuffed quail half atop salty and charred haricots verts and a savory cane syrup gastrique.

While I was never a regular of Jubans Restaurant in its heyday, I had dined in its classy interiors enough to know it was the fine dining establishment of Baton Rouge. The kind of place where you bring an important business client, have a celebratory dinner or go to see and be seen among the Capital City’s movers and shakers.

It was also known for classic Southern dishes, such as its signature Hallelujah Crab, and tried-and-true entrees a restaurant industry friend once lovingly joked were “a piece of fish topped with some stuff and finished with some stuff.”

When Jubans closed its doors during the pandemic, there was worry its days might be over. But that two-year break offered the Juban family an opportunity to bring in some new ideas from Chef-restaurateur Peter Sclafani—now operating partner—and Chef Chris Motto, formerly of Mansurs on the Boulevard and Hell’s Kitchen fame.

That downtime also allowed a reboot of the restaurant’s look, both inside and out.

My group made reservations for a Wednesday night in hopes of avoiding a late-week crowd. But the two limos parked out front were the first sign it wouldn’t be a quiet night. Inside, the front dining room was bustling with every table occupied. The large and brightly decorated atrium was abuzz with groups of friends crammed around the bar.

Luckily, we were seated right away at a table by the stately fireplace in the newly outfitted atrium, giving us a full view of all the activity.

Our servers quickly brought out warm, crusty bread and butter while we browsed the drink menu’s nice selection of wines, signature cocktails and classics.

Drinks ordered, we turned our attention to the food, curious what Chef Motto had in store. For appetizers, we selected the Charred Corn Arancini and Crab Toast.

The Arancini came out first, featuring two plump and breaded balls of creamy corn and rice surrounded by sliced cherry tomatoes, a distinctive herb sauce and a slather of pureed smoked tomato sauce.

The arancini’s stuffing was tender but could have used more seasoning, while the persillade-style herb sauce was bright with flavors of parsley and garlic.

In ordering the Crab Toast, I suspected it would give us just a sampling of the Hallelujah Crab’s glory without the intimidation of eating a giant soft-shell crab, which can be off-putting for some palates.

I was thankfully proven correct: Small and manageable pieces of fried soft shell crab sat atop toasted French bread slices. The menu mentioned several toppings, such as meunière and crab butter, but if they were present, they were lost under a pile of spring greens and a slight drizzle of warm bacon vinaigrette. The crunchy crab itself tasted wonderful, though.

For entrees, my partner and I wanted to taste two things Jubans does best: fine seafood and game.

We went with the Ora King Salmon and the Louisiana Two Birds.

The salmon was imported from New Zealand and touted as the “Wagyu of the Sea.” Nicely portioned, it sat on a bed of sauteed spinach and a small mound of ratatouille. The menu also mentioned a “salmon cracklin,” which I was excited about, but I think that just referred to the crispy and salty salmon skin.

The fish itself was flaky and perfectly cooked, but did I feel like I was eating top-of-the-line, wagyu-level salmon? Not particularly. The highlight of this dish was the ratatouille of deeply roasted and thinly sliced veggies, while the sauteed spinach was rather bland and watery.

In contrast to the salmon, the Louisiana Two Birds was so tasty that my partner and I nearly fought over every piece. A chicken-fried quail breast and a boudin-stuffed quail half sat atop salty and charred haricots verts and a savory cane syrup gastrique. The fried quail breast was so juicy and down-home crunchy, and the boudin-stuffed quail so flavorful with its crispy skin, that we were left wowed.

When it came to dessert, we decided to go for something different with the Sweet Potato Financier.

The small wedge of buttery cake was flecked with sweet potato and bits of Granny Smith apple and practically soaked in sugar, which made the bourbon caramel sauce feel like overkill. But the sweet potato chips on top and a scoop of vanilla ice cream helped cut through the cloying sweetness.

Throughout dinner, service was attentive and personable, and we saw similar interactions unfold at nearby tables of regulars.

Despite a few misses, we were impressed by the flavors we encountered. The chef’s goal of waking up some classics with a contemporary twist was apparent, and the Jubans brand is clearly in good hands.

Throughout the night, we were suspiciously eyeing the entrance to the Tigre Room—a swanky, library-like lounge hidden from the atrium by a sliding wall. I was dying to check it out, but a security guard denied access that evening to all but a few well-dressed visitors.

We assumed there was someone important back there, remembering the limos out front. And sure enough, as our meal ended, we watched a small troupe of suits exit for the front door, flanking Gov. John Bel Edwards in the center.

Indeed, Jubans is back—and as top-tier as ever. 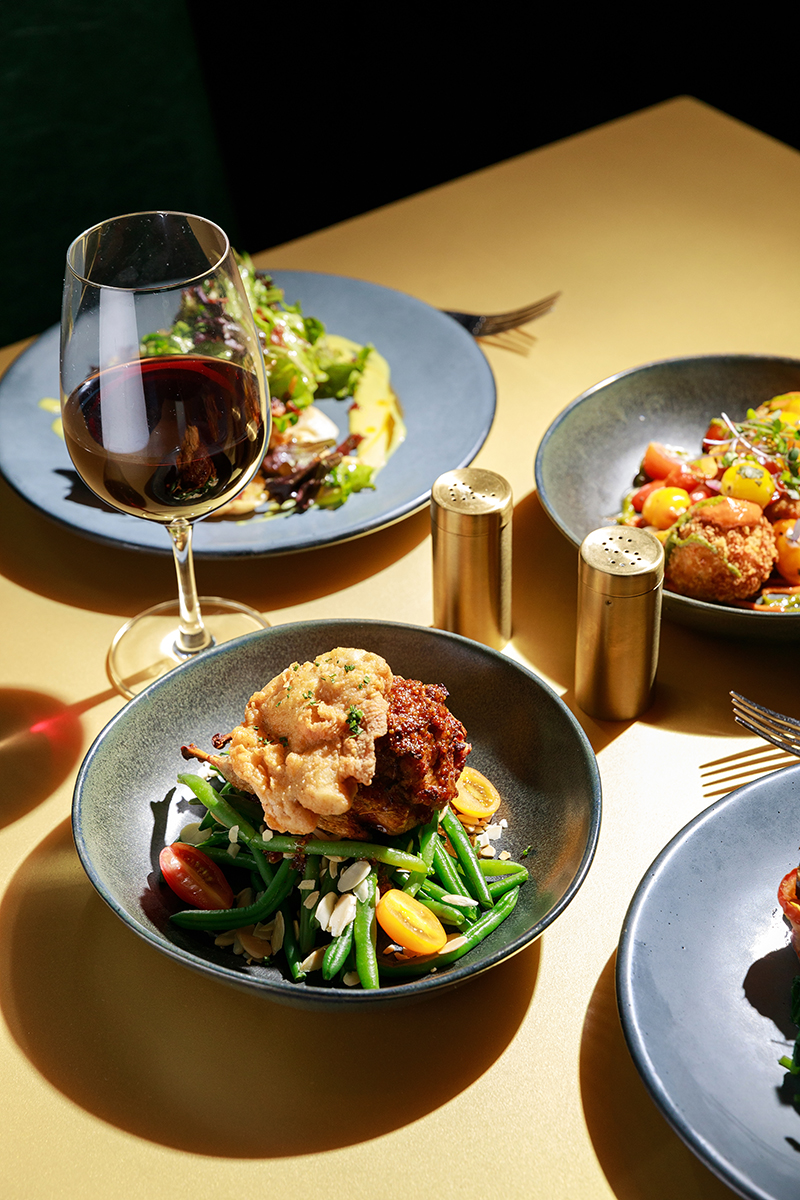