The newest addition to Baton Rouge’s taqueria scene, Rock Paper Taco seeks to redefine what tacos can be.

“I always playfully correct someone when they call us a Mexican restaurant,” owner Joshua Duke says of his new restaurant, which opened at the end of 2021 right off LSU’s campus at 166 W. Chimes St. The restaurant is the first step in a long-planned expansion since its March 2018 launch as a food truck in the parking lot of Tin Roof Brewing Company.

Duke says his vision for the restaurant since the beginning has always been to provide its guests with a “mixture of Americanized tacos with classic tacos and ingredients.” 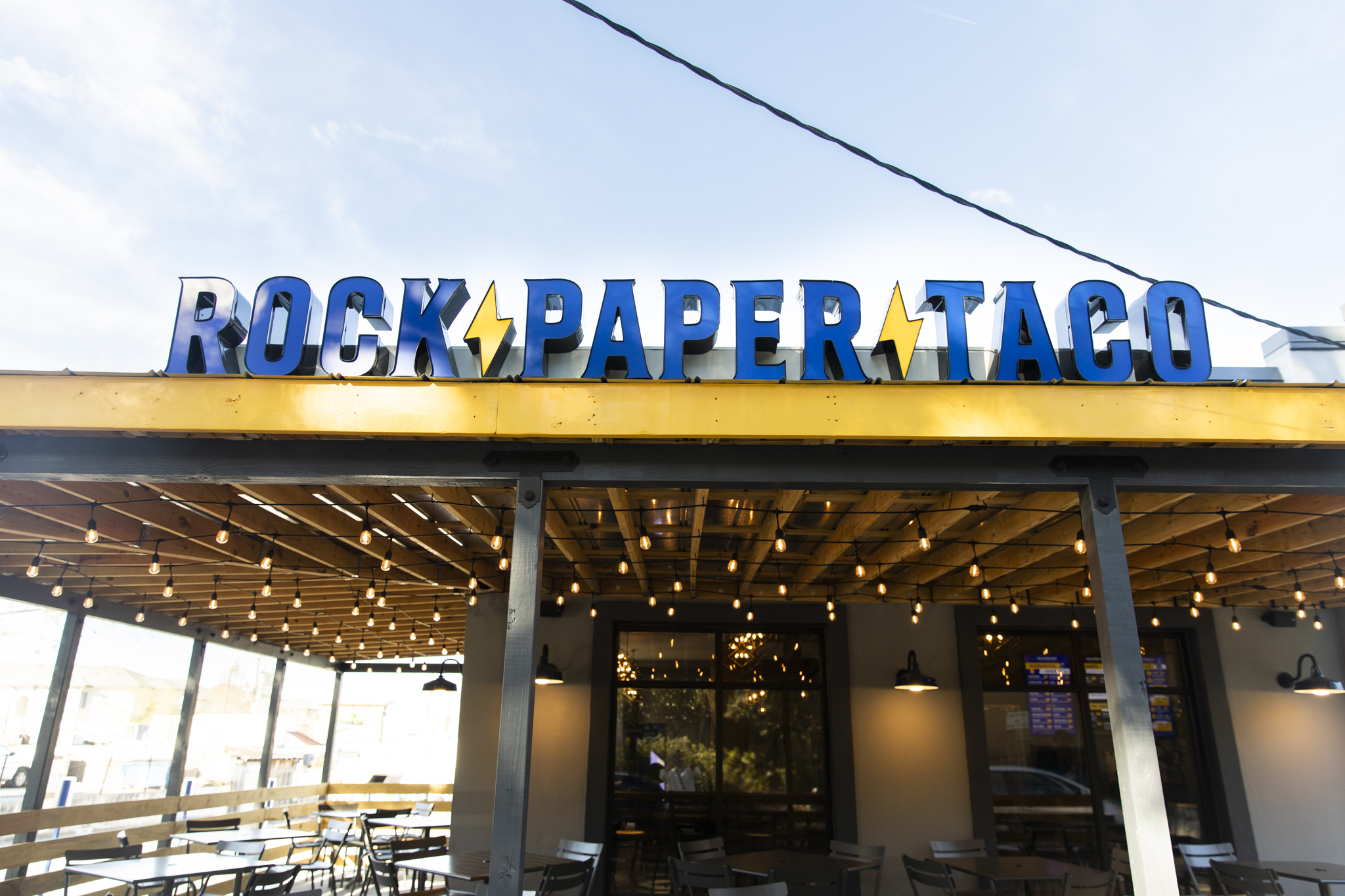 One of its signature tacos, the Dynamite, consists of a waffle in the shape of a tortilla filled with bacon, fried chicken and maple butter served with a side of Steen’s syrup, probably the farthest thing from a classic carne asada street taco.

With taco names like the “Spock,” “Claw,” “Fire” and “Surfer,” Duke isn’t afraid of keeping the restaurant playful.

“My wife came up with the name a long time ago, and we laughed, thinking it was silly,” Duke said. “Then we started thinking of all the marketing aspects and ways to have fun with that.” 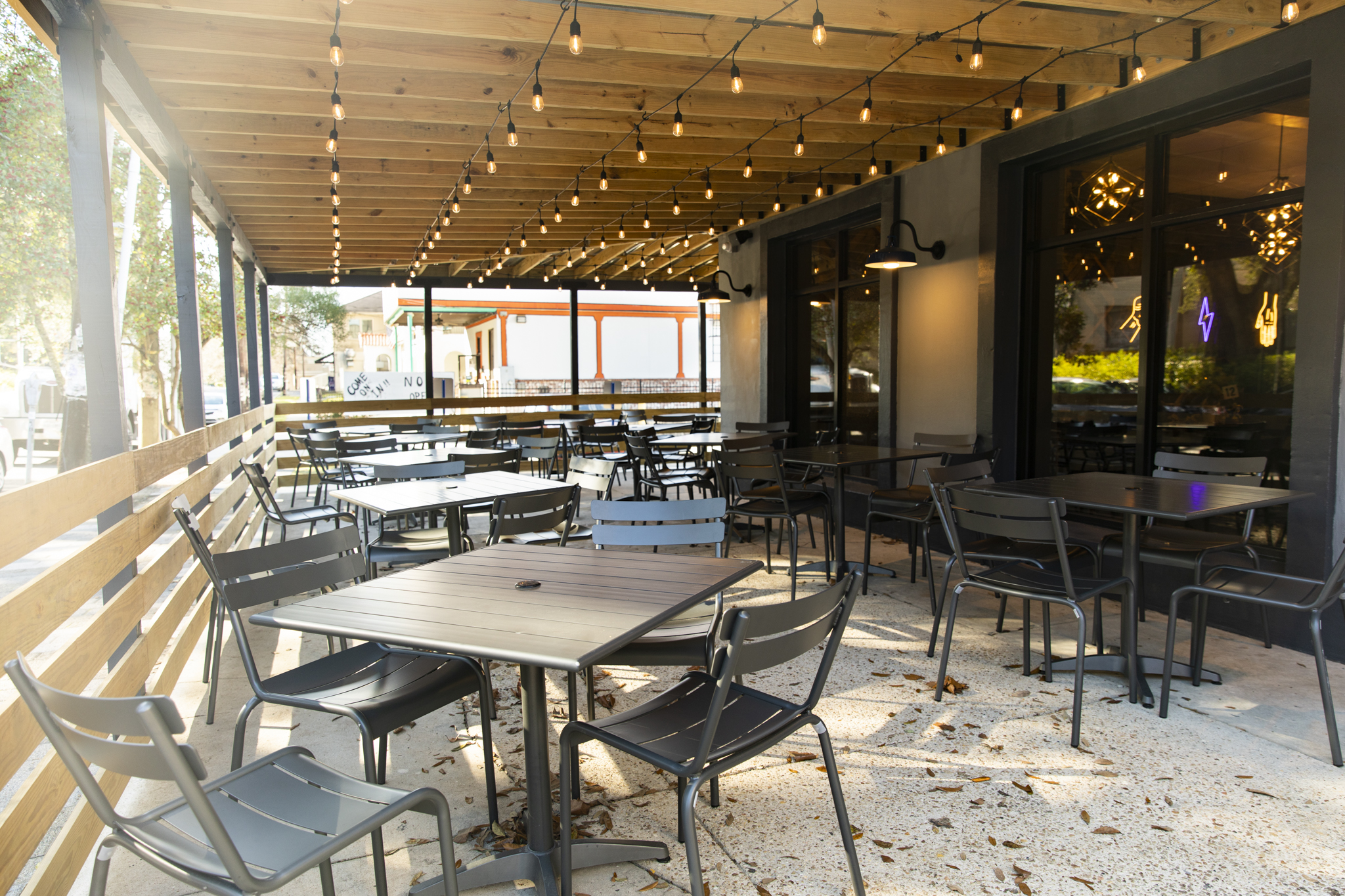 Like other restaurants along Chimes Street like City Slice and The Chimes, Rock Paper Taco serves cocktails to its diners. Duke’s restaurant is unique, however, because its drinks, with the exception of more than a dozen beers on tap, are made purely from agave spirits.

The fully stocked bar serves up a variety of margaritas and cocktails made exclusively with various tequilas and smokey mezcals. Drinks like the old fashioned and Moscow mule, classically made using whiskey and vodka, respectively, instead utilize these agave spirits to create drinks unique to Rock Paper Taco.

“It really goes along the lines with our tacos in trying to be a little different and outside the box,” Duke says. 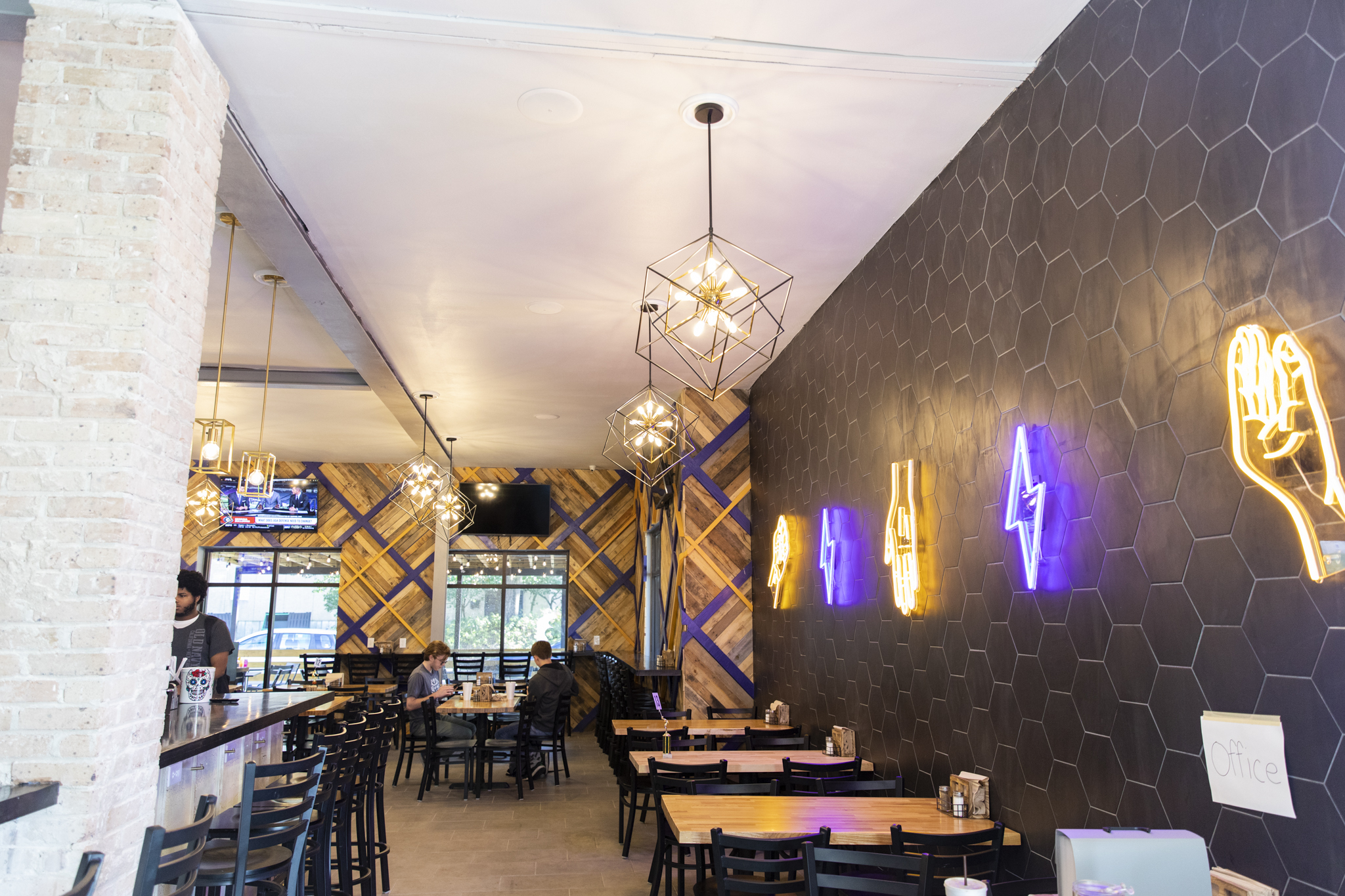 Inside, the restaurant is defined by exposed brick columns, wood and tile accents, and lots of LSU colors. Purple and gold neon light fixtures of hands gesturing “rock,” “paper” and “scissors” line the walls.  Modern pop music such as Post Malone plays on the radio. There is plenty of outdoor seating for patrons to enjoy the season’s cool weather.

Next, Duke has plans to expand to a second location next to his other restaurant, Olive or Twist, on Perkins Road. It is expected to be open by the end of spring.

Even as he prepares for the Perkins location, Duke still has big goals for the restaurant’s first brick-and-mortar.

Whether it’s weekly Taco Tuesday rock, paper, scissor tournaments; free delivery to campus buildings; or mimosas during weekend brunch, Duke wants to emphasize what he believes to be the most important aspect of a restaurant: a fun experience.

“Hopefully people will be drinking too-strong-of-margaritas, having a great time and eating some good tacos,” Duke says.

More than bad breath: What your pet’s mouth is actually telling you [Sponsored]

Things to do in Baton Rouge this weekend: Louisiana Marathon, Chelsea's Live opening and more

Get your 225 Restaurant Celebration vouchers before they sell out