The ‘home of the blue cup’ has turned red for the season. At Jolie Pearl Oyster Bar’s recently launched holiday pop-up, the Christmas spirit floods out of its open front door for passersby on the downtown sidewalks.

The staff, usually clad in the restaurant’s signature blue shirts, now dresses in red uniforms and Santa hats. For the second year in a row, more than 800 merry balloons line the ceiling, floating underneath rows of colorful string lights. Tinsel and wrapping paper cover the walls to go along with the never-ending Christmas playlist. 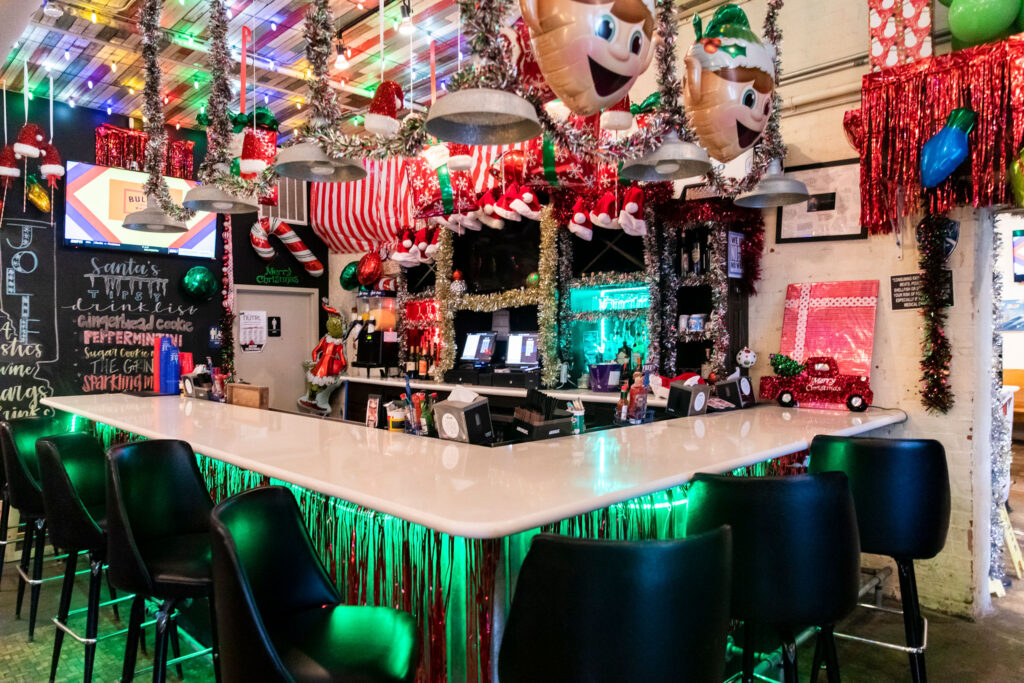 It took the team a full two days to put everything in its place before its pre-Thanksgiving opening. “I don’t even want to know our electric bill,” says Dana Brown, an owner of the downtown restaurant. 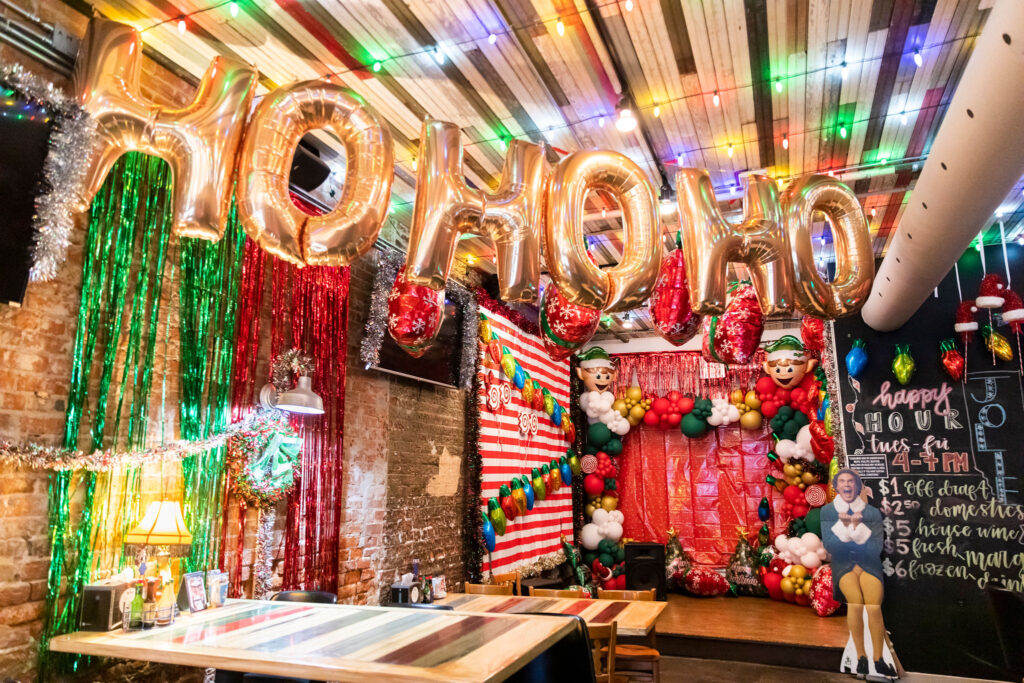 Brown and his girlfriend first found inspiration for the Christmas pop-up while on a trip to Dallas, where they saw similar festive pop-up bars everywhere. So in 2021, he took on the job of bringing the same experience to Baton Rouge, which started to see holiday themed pop-ups around 2020 at bars like The Station. (Check out this tour of The Station’s pop-up Miracle on Bennington from the 225 archives.)

And around downtown, people are noticing. During our late November interview for this story, the neighborhood UPS worker even popped in to Jolie Pearl to compliment the decor. Brown says he’s used to this sort of reaction.

“Right when fall hit, people started asking if we’ll do a pop-up Christmas this year,” he says. 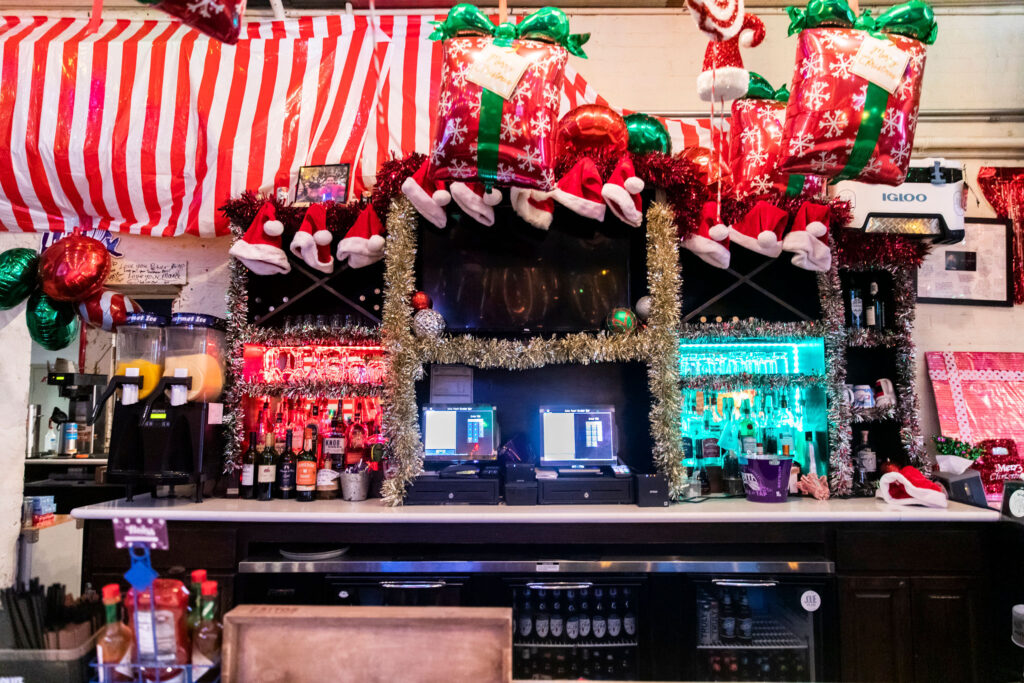 Sharyn Allen of Logeaux Promotions took the lead as the “pop-up director” and drew out last year’s plans. This year she put a new spin on the design, with a “tacky Christmas” theme, which Brown says he encouraged.

Decorations and Christmas music are just a taste of the Jolie Pearl holiday spirit. The new, giant inflatable gingerbread man stands outside the front door to greet customers. The team is still pondering names for their new member, Brown says. An unofficial naming contest is in the works.

“We (at Jolie Pearl) live in our own bubble and chug along,” Brown says.

The team turned the stage side of the bar into an “ugly Christmas sweater,” decorated like one big present. Buddy the Elf stands tall next to the bar’s stage. But he’s not just there to find out your favorite color. Dine-in customers are encouraged to take a photo with him (or elsewhere in the bar), post and tag Jolie Pearl for an entry into an Igloo cooler raffle contest. The winner will be revealed on Dec. 22.

The rest of Jolie Pearl’s dining area is lightly dusted with more subtle holiday decor, in order to accommodate all customers, including those who don’t celebrate Christmas.

The bar is anticipating a busy night for the Festival of Lights happening downtown on Friday, Dec. 2. Brown says this will be Jolie Pearl’s kick-off for its Christmas pop-up, although the decorations have been up since last week.

Live music sets a high-energy atmosphere for customers every Friday and Saturday night. The bar likes to showcase  what Brown calls “LSU bands of the ’90s” to bring a sense of nostalgia out of customers. Spank the Monkey, Abby Leigh, and Barry Hebert are often featured on Jolie Pearl’s stage. 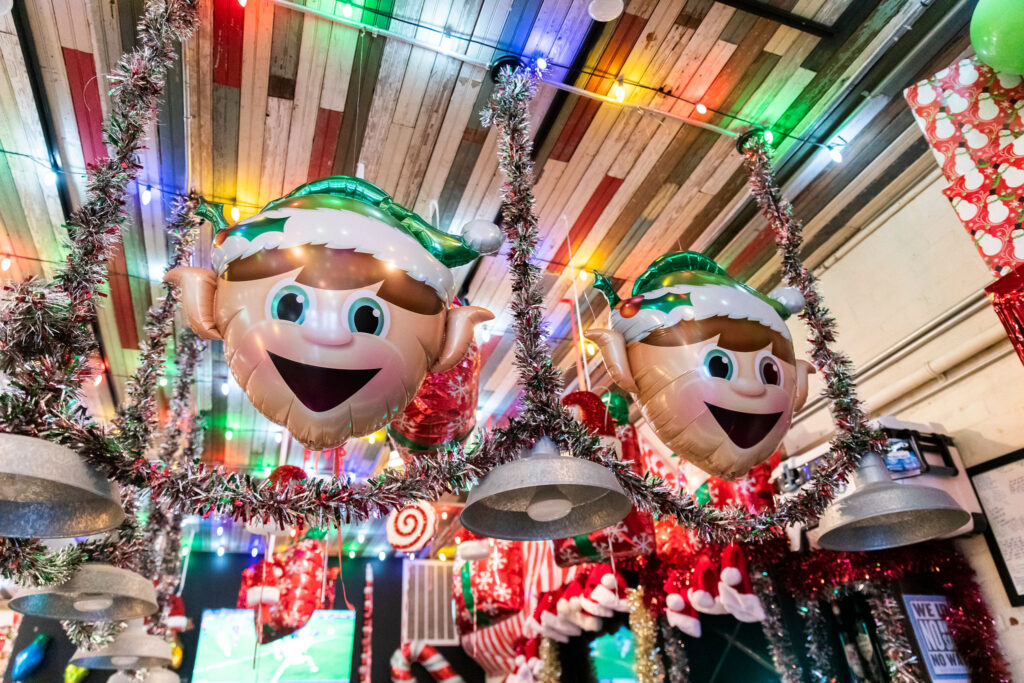 The restaurant has not decided when it will take down the pop-up bar. Although, Brown says it will definitely be up through New Year’s.

“We might just let Christmas run a while,” Brown says. “Every day should be Christmas.”