As anyone who’s ever prepared a Thanksgiving turkey can attest, the fear of serving a dry, bland bird is real. Success and disaster are separated by razor-thin margins, thanks to turkey’s large mass and meager fat content. It’s one of the trickiest proteins on the planet to get right.

“That’s why you have to brine it,” says BRQ chef partner Justin Ferguson. “It’s hands down the most important thing you can do to make sure your turkey turns out.” 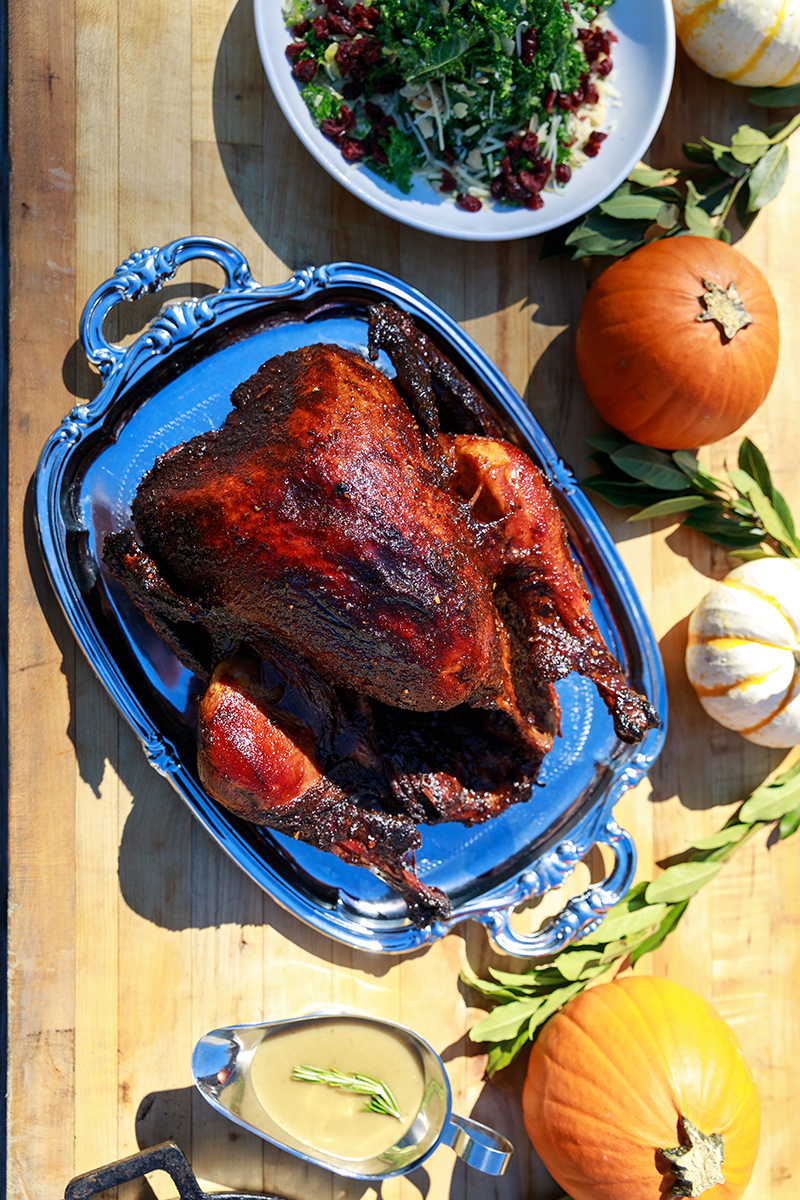 Ferguson has had plenty of time to hone his turkey chops. Since the barbecue eatery opened in 2017, it’s seen steady increases in Thanksgiving catering orders. This year, Ferguson and his team will smoke or roast up to 500 turkeys for to-go orders and onsite catering for clients that include the LSU football team. The restaurant and its large patio are also open on Thanksgiving Day, with seatings until 5:30 p.m.

“It’s the biggest day of the year for us,” Ferguson says. “We come in Wednesday morning and work nonstop for about 45 hours straight without sleeping until we’re done Thursday evening. It’s massive.”

Each turkey is brined in a house-made solution for 24 hours before going into the hickory wood smoker or oven. Sides include cornbread dressing, sweet potato casserole, green bean casserole, Brussels sprouts with bacon and dates, mashed potatoes with turkey gravy and a salad with Ferguson’s signature cranberry, maple and tahini dressing.

While Baton Rouge remains steadfast in family traditions, a growing number of home cooks rely on restaurants and caterers for the Thanksgiving meal, Ferguson says. Some families prefer to dine out, leaving the shopping, preparation and clean-up to someone else. Others like to cook, but might supplement their recipes with a prepared bird or a few extra sides.

“A lot of people find that by the time they shop and take the time to prepare things, it’s cheaper for them to pick up or eat out,” Ferguson says.

For those cooks who cling to preparing the turkey, Ferguson stands by his brining technique.

“You’re adding salinity to the bird,” he says, “so the flavor and moisture penetrate.” brqrestaurant.com

HOW TO BRINE YOUR BIRD

Create a brining solution by dissolving one cup each of sugar and salt into a gallon of water. (Heat the water to dissolve, then cool it completely.) A natural sweetener can be substituted for sugar, says Ferguson, who uses honey in BRQ’s brine. To the solution, add bay leaves, fresh thyme and other herbs of choice. Place a thawed bird into a clean, 5-gallon bucket and pour in the solution. Refrigerate for 6 to 24 hours. If you don’t have room in your refrigerator, Ferguson says, submerge the bucket into a larger vessel filled with ice.

Roast the bird at 325 degrees until the breast meat reaches 162 degrees, Ferguson says. Let it rest for at least 20-25 minutes, during which it’ll continue to cook, until it reaches 165 degrees. Don’t be tempted to slice into it immediately after it comes out of the oven, Ferguson says.

“Then all the juices will run out and it’ll be dry,” he says. “Letting it rest keeps it juicy.”

For that, everyone will be thankful.