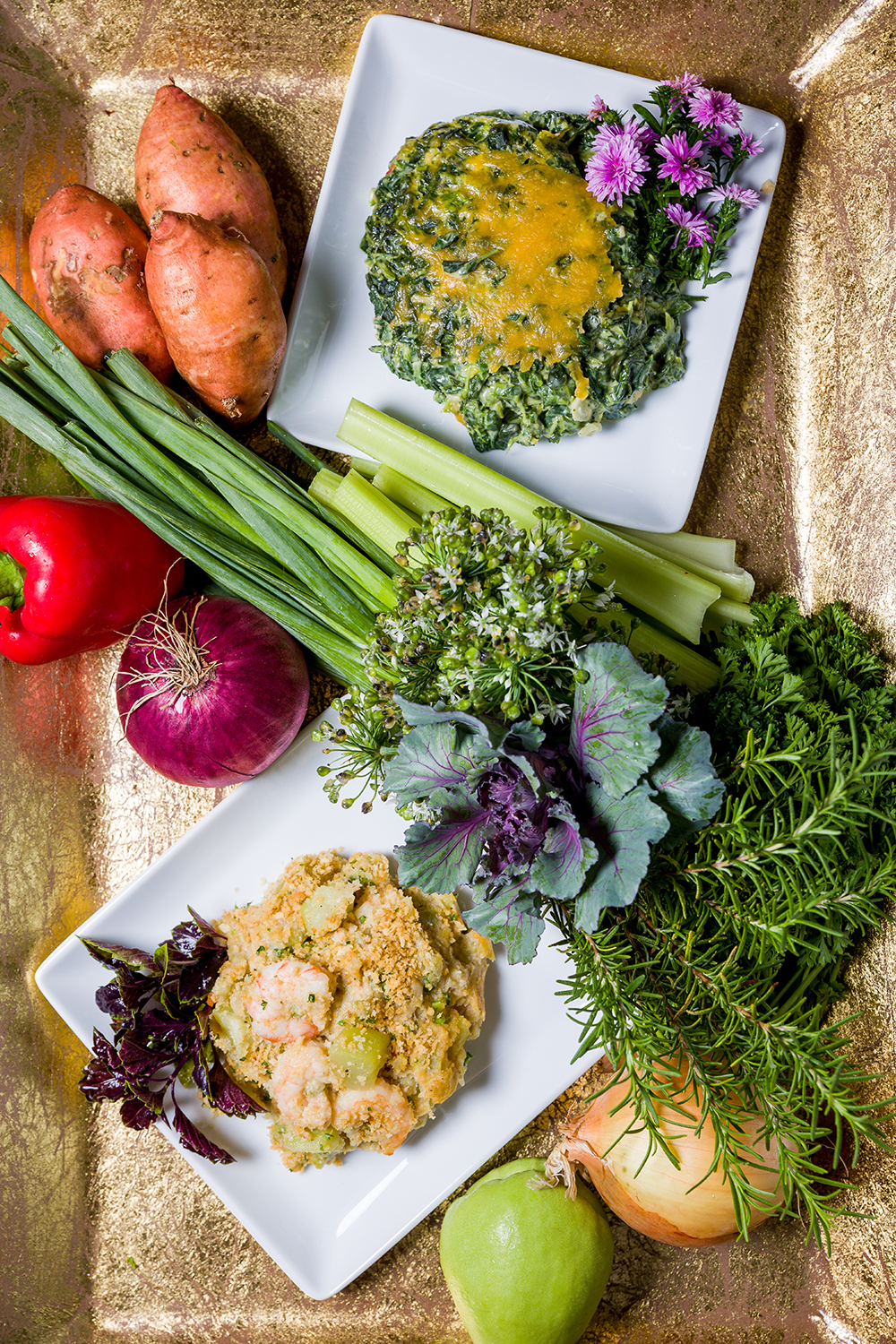 A common admission around the Thanksgiving table is that it’s the side dishes—not the turkey—that bait our taste buds with anticipation.

Nostalgia fare at its finest, regional Thanksgiving sides like cornbread dressing, spinach Madeleine, carrot soufflé, candied sweet potatoes, and shrimp and mirliton casserole are dishes that fortify bonds between generations, while propping up what is arguably one of the world’s blandest proteins.

This month, home cooks take on the task of preparing for the country’s favorite culinary holiday. But in keeping with a current trend, many will supplement their own dishes with those prepared by their favorite restaurant or caterer.

“The cornerstone of our success is doing a lot of these old-fashioned dishes that your grandmother used to make,” says Chef Don Bergeron of Bergeron’s City Market, which has seen Thanksgiving catering orders grow every year since the business opened in 2003.

Thanksgiving flavors are so popular among his customers that Bergeron serves monthly Thanksgiving-inspired lunch specials year-round. Casseroles are an essential component of his menu, he says.

“We have a lot of older customers who say the flavors bring them back to growing up in south Louisiana,” Bergeron says. “And that they taste just the way they remember.” 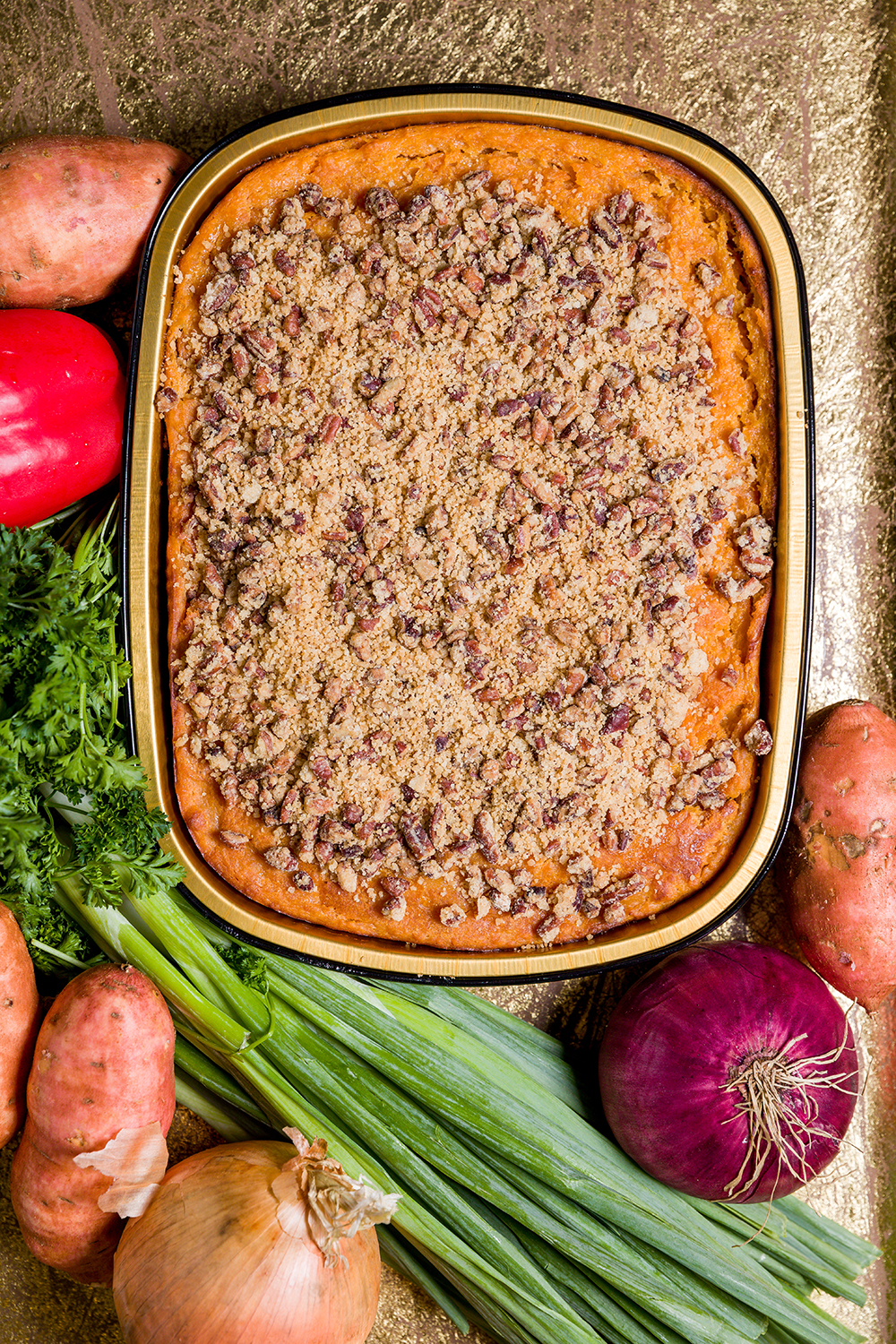 The popularity of casseroles endures over generations because of the dishes’ simplicity and straightforwardness. “They’re not overly complicated,” Bergeron says. “They don’t usually have that many ingredients—maybe five to eight, or so.” 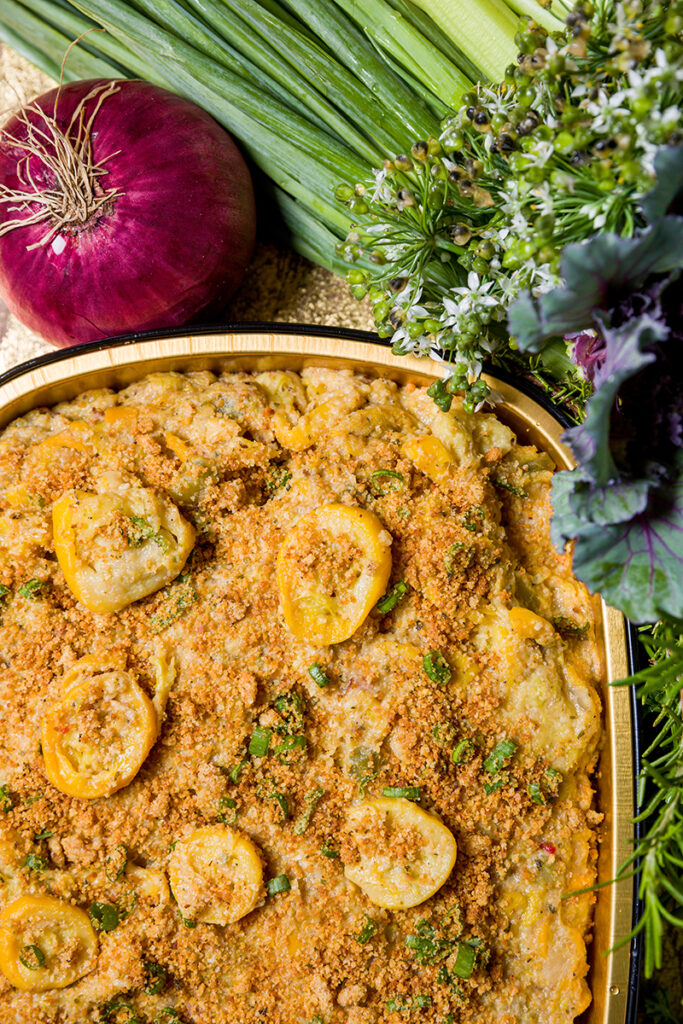 Generally speaking, south Louisiana holiday casseroles start with melted butter or a light roux, followed by the holy trinity of chopped onion, celery and green bell pepper. Especially in vegetable casseroles, a binder of some kind is required to hold the main ingredients together; Bergeron uses house-made béchamel sauce to replace that backbone of home casserole cooking, the can of cream-of-something soup. Finally, the dish is usually finished with some kind of topping—marshmallows or toasted pecans in the case of yams, and toasted breadcrumbs for vegetable casseroles.

No surprise, Spinach Madeleine is one of Bergeron’s best-sellers this time of year. The spicy creamed spinach recipe was developed at the spur of the moment in 1956 by the late Madeline Wright for a bridge gathering, and was included in the original 1959 River Road Recipes, where she spelled her name with an extra “e” for added flourish. Its distinct flavor profile is defined by the presence of celery salt and, in the original version, a roll of Kraft jalapeno cheese, a product discontinued in the ’90s. The Junior League’s official substitution calls for 4 ounces of Velveeta cheese and 2 teaspoons of minced fresh jalapeño.

Sweet potatoes are a mainstay of Louisiana Thanksgiving tables, but in Baton Rouge, carrot soufflé also has special resonance. The dish was made popular across the region by Piccadilly Restaurants, whose first lunch cafeteria was founded in downtown Baton Rouge in 1932. Bergeron makes a version on his menu.

Other timeless, albeit less common, regional one-dish wonders include shrimp and mirliton casserole, a seafood-meets-squash combo bound by buttery breadcrumbs and dried herbs; and crab and eggplant casserole, in which peeled cubed eggplant is cooked down and combined with fresh crabmeat, aromatics, butter and breadcrumbs or crushed crackers. These two classics, along with oyster dressing, may be on fewer tables this year, due to a spike in seafood prices that has only worsened since Hurricane Ida.

But no matter their ingredients, casseroles remain the ultimate expression of comfort food. And feeling comfortable, especially lately, is what the holidays are all about. chefdonb.com/catering

Things to do this week around town: Turkey Trot, outdoor movie night, funk shows and more